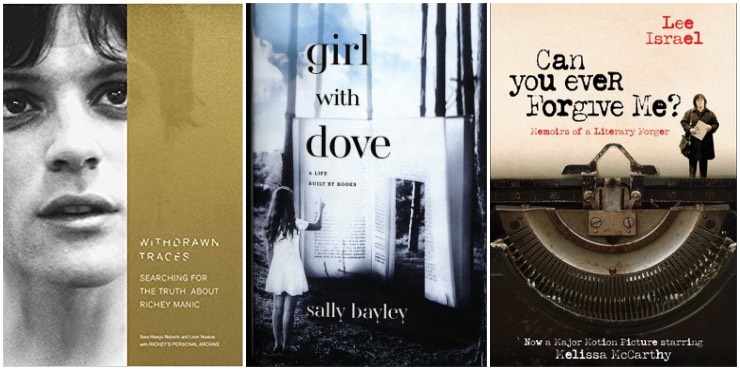 “From despair, to where? On 1 February 1995, Richey Edwards, guitarist of the Manic Street Preachers, went missing at the age of 27. On the eve of a promotional trip to America, he vanished from his London hotel room, his car later discovered near the Severn Bridge, a notorious suicide spot. Over two decades later, Richey’s disappearance remains one of the most moving, mysterious and unresolved episodes in recent pop culture history.

“For those with a basic grasp of the facts, Richey’s suicide seems obvious and undeniable. However, a closer investigation of his actions in the weeks and months before his disappearance just don’t add up, and until now few have dared to ask the important questions. This title is written with the co-operation of the Edwards family, testimony from Richey’s closest friends and unprecedented and exclusive access to Richey’s personal archive.”

Can You Ever Forgive Me? Memoirs of a literary forger, by Lee Israel

“Before turning to her life of crime - running a one-woman forgery business out of a phone booth in a Greenwich Village bar and even dodging the FBI - Lee Israel had a legitimate career as an author of biographies. But by 1990, almost broke and desperate to hang onto her Upper West Side studio, Lee made a bold and irreversible career change: inspired by a letter she’d received once from Katharine Hepburn, and armed with her considerable skills as a researcher and celebrity biographer, she began to forge letters in the voices of literary greats.

“Between 1990 and 1991, she wrote more than 300 letters in the voices of, among others, Dorothy Parker, Louise Brooks, Edna Ferber, Lillian Hellman, and Noel Coward - and sold the forgeries to memorabilia and autograph dealers. This is Lee’s hilarious and shocking memoir of the astonishing caper.”

This is now a major film starring Melissa McCarthy and Richard E. Grant.

Maid: hard work, low pay, and a mother’s will to survive, by Stephanie Land

Firsthand account of working as a low wage cleaner in America. This was chosen as a Radio 4 Book of the Week.

“As a struggling single mum, determined to keep a roof over her daughter’s head, Stephanie Land worked for years as a maid, working long hours in order to provide for her small family. In Maid, she reveals the dark truth of what it takes to survive and thrive in today’s inequitable society.

“As she worked hard to climb her way out of poverty as a single parent, scrubbing the toilets of the wealthy, navigating domestic labour jobs as a cleaner whilst also juggling higher education, assisted housing, and a tangled web of government assistance, Stephanie wrote. She wrote the true stories that weren’t being told. The stories of the overworked and underpaid.”

The Age of Light, by Whitney Scharer

Whitney Scharer’s new novel is based on the story of the legendary photographer Lee Miller. If you would like to read a factual account of her life, Lee Miller’s War: beyond D-Day, by Antony Penrose, is a good place to start.

“One cool day in 1929, Lee Miller arrives in bohemian Paris to pursue her dream of being an artist, having left behind a successful modelling career at Vogue. Gorgeous and talented, she catches the eye of renowned Surrealist artist Man Ray and convinces him to hire her as his assistant. Man is an egotistical, charismatic force, and soon their personal and professional lives become intimately entwined.

“As Lee begins to assert herself, and moves from being a muse to an artist, Man’s jealousy spirals out of control, and their mutual betrayals threaten to destroy them both.”

Comprehensive volume covering the work of photographer Don McCullin who is the subject of a major exhibition at Tate Britain from 5 February - 6 May.

Girl with Dove: a life built by books, by Sally Bayley

A former Radio 4 Book of the Week. Sally Bayley recalls a strange upbringing that caused her to make her bonds with characters from books.

“Growing up in a dilapidated house by the sea where men were forbidden, Sally’s childhood world was filled with mystery and intrigue. Hippies trailed through the kitchen looking for God - their leader was Aunt Di, who ruled the house with charismatic force.

“When Sally’s baby brother vanishes from his pram, she becomes suspicious of the activities going on around her. What happened to Baby David and the woman called Poor Sue? And where did all the people singing and wailing prayers in the front room suddenly go?

“Disappearing into a world of books and reading, Sally adopts the tried and tested methods of Miss Marple. Taking books for hints and clues, she turns herself into a reading detective. Her discovery of Jane Eyre marks the beginning of a vivid journey through Victorian literature where she also finds the kind, eccentric figure of Charles Dickens’ Betsey Trotwood.”

“Frances is a 30-something sub-editor, an invisible production drone on the books pages of the Questioner. Her routine and colourless existence is disrupted one winter evening when she happens upon the aftermath of a car crash and hears the last words of the driver, Alys Kyte.”

Harriet Lane’s brilliant debut novel has been turned into a stage show, running at the Bridge Theatre, Bermondsey from 25 February - 30 March.