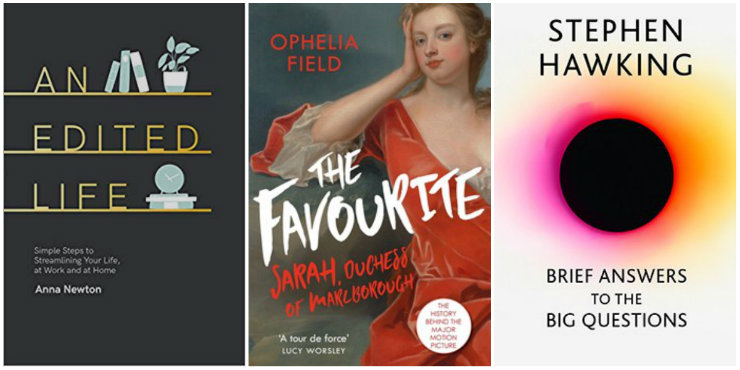 An Edited Life: simple steps to streamlining your life, at work and at home, by Anna Newton

The early months of the year are often a time to take stock and declutter. This book has been widely reviewed.

“Declutter every aspect of your life - from your wardrobe, exercise schedule and food budget to your phone, bookshelves and beauty regime - with this realistic guide to getting neat and keeping things that way.

“Anna Newton is just trying to balance work, her friends, her family, her husband Mark, a growing handbag habit and a love for takeaway pizza. Over the past 8 years of running the blog and corresponding YouTube channel The Anna Edit, she’s grown a loyal viewership who tune in for her weekly videos on everything from house renovations to the best summer foundation.”

Manhunt: how I brought serial killer Levi Bellfield to justice, by Colin Sutton

“On 21st March, 2002, Milly Dowler left her school in Surrey for the last time. Less than an hour later, she was to be abducted and murdered in the cruellest fashion, sparking a missing person investigation that would span months before her body was found. In the two years that followed, two more young women - Marsha McDonnell and then Amélie Delagrange - were murdered in unspeakably brutal attacks.

“Yet with three murdered women on their hands, and few leads open to them, investigating officers were running out of ideas and options, until SIO Colin Sutton was drafted into the investigation for the murder of Delagrange. Seeing a connection between the three women, and thriving under the pressure of a serial killer hunt, Sutton was finally able to bring their murderer to justice after the case had begun to seem hopeless.”

This has been made into a major ITV series starring Martin Clunes.

The Favourite, by Ophelia Field

“This biography presents a portrait of Sarah Churchill, the first Duchess of Marlborough (1660-1744). Aiming to bring her voice back to life, the text casts a critical eye over images of the Duchess in art, history, and literature.”

The factual background to the recent film starring Olivia Colman.

Kafka’s Last Trial: the case of a literary legacy, by Benjamin Balint

Another title that has been widely reviewed.

“When Franz Kafka died in 1924, his loyal friend and champion Max Brod could not bring himself to fulfil Kafka’s last instruction: to burn his remaining manuscripts. Instead, Brod devoted the rest of his life to canonising Kafka as the most prescient chronicler of the 20th century.

“By betraying Kafka’s last wish, Brod twice rescued his legacy - first from physical destruction, and then from obscurity. But that betrayal also led to an international legal battle over which country could lay claim to Kafka’s legacy: Germany, where Kafka’s own sister perished in the Holocaust and where he would have suffered a similar fate had he remained, or Israel?

“At once a brilliant biographical portrait of Kafka and Brod and the influential group of writers and intellectuals known as the Prague Circle, Kafka’s Last Trial offers a gripping account of the controversial trial in Israeli courts.”

Pierre Bonnard - the colour of memory, by Matthew Gale (ed.)

“Pierre Bonnard was one of a generation of artists that helped transform painting during the first half of the 20th century. As a painter, he preferred to work from memory - imaginatively capturing the spirit of a moment and expressing it through his unique handling of colour and unconventional choice of composition. Focussing on Bonnard’s work from 1912-47, this book presents a variety of landscapes and intimate domestic scenes which capture the passage of time.”

This edition accompanies the great post-impressionist’s first major British show in two decades. For those who enjoy shimmering scenes on the Côte d’Azur.

“I Object gathers together some 180 objects that people have created, adapted and used to mock and attack the status quo in societies as varied as Egypt in the 11th century BC, 16th-century England and late 20th-century Afghanistan. The objects - ranging from badges, posters, prints and ceramics to items that contain messages hidden from first view, such as wooden doors from Nigeria, a cotton kanga from Kenya or a postage stamp from China - frequently illuminate lost or forgotten movements in history, giving voice to those who feel disenfranchised or have no other way to express their views safely.”

The Wall, by John Lanchester

Brief Answers to the Big Questions, by Stephen Hawking

Last thoughts on a range of big topics from one of the greatest minds in history. Brief Answers was a recent Radio 4 book pick.