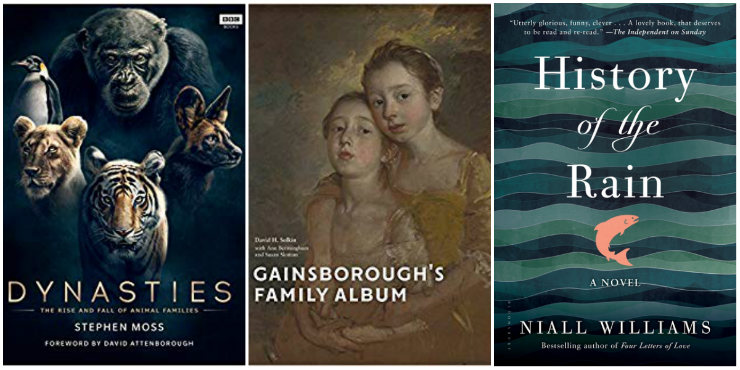 The Telling Room: a tale of passion, revenge and the world’s finest cheese, by Michael Paternini

“Michael Paterniti was working in a gourmet delicatessen when he encountered a piece of cheese that was to change his life. It was Paramo de Guzman, a rare Spanish queso reputed to be the finest, and most expensive, in the world. Paterniti was too broke to actually buy the cheese, but he vowed that one day, he would track down this cheese’s true story.

“Ten years later, he decided to make good on his pact, and headed to the cheese’s tiny hilltop village birthplace. Guzman’s cheesemaker proved to be a voluble, magnetic, heartbroken genius, suitably named Ambrosio. But Guzman proved to be no idyllic slow-food arcadia. Paterniti found he’d wandered into the heart of an unfolding mystery. When he learned that the cheesemaker had apparently plotted to murder his closest friend, the village began to spill its long-held secrets, and nothing was quite what it seemed.”

Secret Lives of a Secret Agent: the mysterious life and times of Alexander Wilson, by Tim Crook

The Second World War Chief of MI6 said Alexander Wilson had “remarkable gifts as a writer of fiction, and no sense of responsibility in using them!” Wilson’s ‘secret lives’ extended to his private life with four wives and four families - not necessarily one after the other.

His story is the subject of BBC drama series Mrs Wilson. Based on the memoirs of one of his wives, Alison, it stars their granddaughter, Ruth Wilson.

Death and Nightingales, by Eugene McCabe

“It is 1883, and all Ireland’s in turmoil with agrarian, political and sectarian revolt. From the opening of this pastoral of love and betrayal, events roll towards an inevitable, tragic end. Below the surface, complex tensions between religions, between men and women, good and evil are explored.”

This 1992 novel has recently been adapted into a BBC drama starring Anne Skelly and Jamie Dornan.

The ABC Murders, by Agatha Christie

The book behind the major BBC Christmas production.

“There’s a serial killer on the loose. His calling card is an ABC Railway Guide, left beside each victim’s body. But if A is for Alice Ascher, and B for Betty Bernard, then who will victim C be? Hercule Poirot is the man to find out.”

History of the Rain, by Niall Williams

“Bedbound in her attic room beneath the falling rain, in the margin between this world and the next, Plain Ruth Swain is in search of her father. To find him, enfolded in the mystery of ancestors, Ruthie must first trace the jutting jaw lines, narrow faces and gleamy skin of the Swains from the restless Reverend Swain, her great-grandfather, to grandfather Abraham, to her father, Virgil - via pole-vaulting, leaping salmon, poetry and the 3,958 books piled high beneath the two skylights in her room, beneath the rain.”

Dynasties: the rise and fall of animal families, by Stephen Moss

“Family isn’t just important. It’s everything. From lions hunting as a pride to penguins huddling together to keep from freezing in the bitter Antarctic winter, many animals are dependent on complex social relationships for their survival. Powerful dynasties lay claim to vast swathes of territory, fighting off rivals and securing their hunting grounds for generations to come.

“Dynasties offers an immersive insight into the shifting hierarchies of animal families. Each chapter follows a different dynasty, from the Marsh Lions of the Masai Mara to rival packs of African hunting dogs, from a tiger protecting her newborn cubs to a chimpanzee troop and the penguin colonies of the Antarctic.”

The Forgotten Waltz, by Anne Enright

Another recent Book at Bedtime.

“In Terenure, a pleasant suburb of Dublin, in the winter of 2009, it has snowed. Gina Moynihan, girl about town, recalls the trail of lust and happenstance that brought her to fall for the love of her life.”

“‘I am sick of Portraits and wish very much to take up my Viol da Gamba and walk off to some sweet village when I can paint Landskips and enjoy the fag end of life in quietness and ease.’

“Despite this famous protestation in a letter to his friend William Jackson, Thomas Gainsborough was clearly prepared to make an exception when it came to making portraits of his own family and himself. This book features over 50 portraits of himself, his wife, his daughters, other close relatives and his beloved dogs, Tristram and Fox.

“Spanning more than four decades, Gainsborough’s family portraits chart the period from the mid-1740s, when he plied his trade in his native Suffolk, to his most successful latter years at his luxuriously appointed studio in London’s West End.”

Sumptuous art book which accompanies the exhibition at the National Portrait Gallery showing Gainsborough at his most natural and relaxed, painting his loved ones.

Born Lippy: how to do female, by Jo Brand

A recent choice for Radio 4 Book of the Week.

“There has been a whole tradition of books over hundreds of years where a father shares his wisdom with his son. Meanwhile, women have tended to remain silent (a.k.a. bullied into thinking their advice wasn’t worth writing down). Jo Brand’s book puts a stop to all that.

“Ranging from your family and how to survive it, to what no one tells you about the female body; from how not to fall in love, to heckling as a life-skill, Born Lippy gathers together the things Jo’s learnt about the world, the things she wishes she’d known and the things she hopes for the future.”

“The Anglo-Saxon period stretches from the arrival of Germanic groups on British shores in the early fifth century to the Norman Conquest of 1066. During these centuries, the English language was used and written down for the first time, pagan populations were converted to Christianity, and the foundations of the kingdom of England were laid.

“This richly illustrated book presents Anglo-Saxon England as the home of a highly sophisticated artistic and political culture, deeply connected with its continental neighbours. Leading specialists in early medieval history, literature and culture engage with the unique, original evidence from which we can piece together the story of the Anglo-Saxon kingdoms, examining outstanding and beautiful objects such as highlights from the Staffordshire hoard and the Sutton Hoo burial.