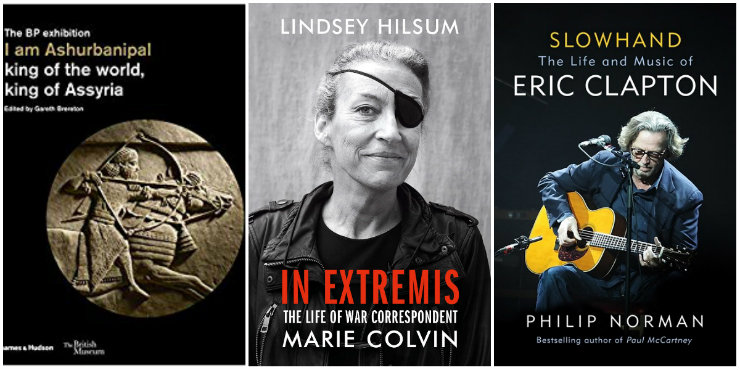 In Extremis: the life of war correspondent Marie Colvin, by Lindsey Hilsum

“Marie Colvin was glamorous, hard-drinking, braver than the boys, with a troubled and rackety personal life. With fierce compassion and honesty, she reported from the most dangerous places in the world, fractured by conflict and genocide, going in further and staying longer than anyone else. In Sri Lanka in 2001, Marie was hit by a grenade and lost the sight in her left eye - resulting in her trademark eye patch - and in 2012 she was killed in Syria.

“Like her hero, the legendary reporter Martha Gellhorn, she sought to bear witness to the horrifying truths of war, to write ‘the first draft of history’ and crucially to shine a light on the suffering of ordinary people. Written by fellow foreign correspondent Lindsey Hilsum, this is the story of the most daring war reporter of her age.”

“Letters Home gives access to the last major archive of Larkin’s writing to remain unpublished: the letters to members of his family.

“These correspondences help tell the story of how Larkin came to be the writer and the man he was: to his father Sydney, a ‘conservative anarchist’ and admirer of Hitler, who died relatively early in Larkin’s life; to his timid depressive mother Eva, who by contrast, lived long, and whose final years were shadowed by dementia; and to his sister Kitty, the sparse surviving fragment of whose correspondence with her brother gives an enigmatic glimpse of a complex and intimate relationship.”

Slowhand: the life and music of Eric Clapton, by Philip Norman

Warts and all biography of one of rock music’s greatest guitarists.

“Eric Clapton is acknowledged to be rock’s greatest virtuoso, the unrivalled master of its most essential tool, the solid-body electric guitar. Clapton transfigured three of the 1960s’ most iconic bands, the Yardbirds, Cream and Blind Faith, walking away from each when it failed to measure up to his exacting standards.

“No life has been more rock ‘n’ roll than Clapton’s in his epic consumption of drugs and alcohol, his insatiable appetite for expensive cars, clothes, and women - most famously revealed when he fell in love with Pattie Boyd, the wife of his best friend, George Harrison, and the inspiration for Layla.

“With the benefit of unrestricted access to family members, close friends, and fellow musicians, and his encyclopedic knowledge, Philip Norman has written the definitive portrait of the insecure, often pain-racked man.”

I Am Ashurbanipal: king of the world, king of Assyria, by Gareth Brereton (ed.)

“In 668 BC Ashurbanipal inherited the largest empire in the world, which stretched from the shores of the eastern Mediterranean to the mountains of western Iran. He ruled from his massive capital at Nineveh, in present-day Iraq, where temples and palaces adorned with brilliantly carved sculptures dominated the citadel mound, and an elaborate system of canals brought water to his pleasure gardens and game parks. Ashurbanipal, proud of his scholarship, assembled the greatest library in existence during his reign. Guided by this knowledge, he defined the course of the empire and asserted his claim to be ‘King of the World’.

“Beautifully illustrated, this book features images of objects excavated from all corners of the empire and highlights the British Museum’s unrivalled collection of Assyrian reliefs, which bring to life the tumultuous story of Ashurbanipal’s reign.”

“In the 1980s Nina Stibbe wrote letters home to her sister in Leicester describing her trials and triumphs as a nanny to a London family. There’s a cat nobody likes, a visiting dog called Ted Hughes (Ted for short) and suppertime visits from a local playwright. Not to mention the two boys, their favourite football teams and rude words, a very broad-minded mother and assorted nice chairs.

“From the mystery of the unpaid milk bill and the avoidance of nuclear war to mealtime discussions on pie filler, the greats of English literature, swearing in German and sexually transmitted diseases, Love, Nina is a wonderful celebration of bad food, good company and the relative merits of Thomas Hardy and Enid Blyton.”

Radio 4 Book at Bedtime pick from the bestselling author of Big Little Lies.

“The retreat at health-and-wellness resort Tranquillum House promises total transformation. Nine stressed city dwellers are keen to drop their literal and mental baggage, and absorb the meditative ambience while enjoying their hot stone massages. Miles from anywhere, without cars or phones, they have no way to reach the outside world. Just time to think about themselves, and get to know each other.

“Watching over them is the resort’s director, a woman on a mission. But quite a different one from any the guests might have imagined. For behind the retreat’s glamorous facade lies a dark agenda. These nine perfect strangers have no idea what’s about to hit them.”

Latest Nick Hornby book to be adapted for the big screen.

“Annie lives in a washed-up English seaside town where her partner of convenience, Duncan, immerses himself in the esoterica of an obscure American singer-songwriter, Tucker Crow. When Tucker releases a demo version of his album, Juliet, Duncan’s and Annie’s divergent reactions pull them apart.”

My Brilliant Friend, by Elena Ferrante

This was published in 2012 but is now a Sky Atlantic production. I loved this book and the others in the series and cannot imagine anything being better than the books. For anyone who hasn’t read them yet, books tell the story of childhood friends Elena and Lila and their journeys through life.

The New Silk Roads: the present and future of the world, by Peter Frankopan

“When The Silk Roads was published in 2015, it became an instant classic. A major reassessment of world history, it compelled us to look at the past from a different perspective.

“In an age of Brexit and Trump, the themes of isolation and fragmentation permeating the Western world stand in sharp contrast to events along the Silk Roads since 2015, where ties have been strengthened and mutual cooperation established. Peter Frankopan takes a fresh look at the network of relationships being formed along the length and breadth of the Silk Roads today.”