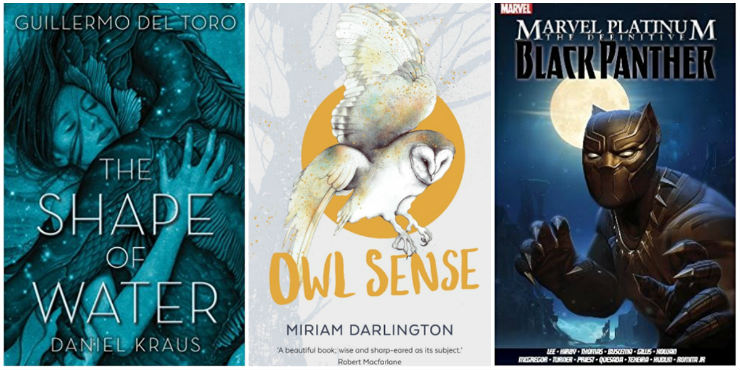 Fire and Fury: Inside the Trump White House, by Michael Wolff

It is almost impossible to escape our first choice. There are extracts all over the web but if you want to read the book itself we have several copies for loan and the eAudiobook.

“With extraordinary access to the Trump White House, Michael Wolff tells the inside story of the most controversial presidency of our time. The first nine months of Donald Trump’s term were stormy, outrageous - and absolutely mesmerising. Now, thanks to his deep access to the West Wing, bestselling author Michael Wolff tells the riveting story of how Trump launched a tenure as volatile and fiery as the man himself.”

This title has been widely reviewed and will be a popular item I’m sure. A local photographer stumbled upon thousands of David Granick’s colour slides in early 2017. The images capture the post-war streets of London’s East End in beautiful Kodachrome at a time when black and white photography was the norm. Houses had not yet been rebuilt since the war and the gentrification of the East End was yet to take place.

This is a joy for the social historian and the leisure reader, taking us back to the days when cars were not commonplace and East London was on the cusp of social transition.

This was recently nominated for seven Oscars, taking two: Best Actress for Frances McDormand and Best Supporting Actor for Sam Rockwell. While you’re waiting for the DVD to come out, have a read of the original book.

“After months pass without a culprit in her daughter’s murder case, Mildred Hayes pays for three signs challenging the authority of William Willoughby, the town’s revered chief of police. When his second-in-command, Officer Dixon, a mother’s boy with a penchant for violence, gets involved, the battle between Mildred and Ebbing’s law enforcement threatens to engulf the town.”

Call Me By Your Name, by Andre Aciman

“This is the story of a sudden and powerful romance that blooms between 17-year-old Elio and his father’s house guest, Oliver, during a restless summer on the Italian Riviera. What grows from the depths of their souls is a romance of scarcely six weeks’ duration, and an experience that marks them for a lifetime.”

The Shape of Water, by Guillermo Del Toro & Daniel Kraus

The Shape of Water was nominated for 13 Oscars and won four: Best Picture, Best Original Music Score, Best Director and Best Production Design. In the novel that both ties in with and expands upon the film, Guillermo Del Toro and author Daniel Kraus combine their talents to create a haunting, heartbreaking love story.

Marvel’s latest superhero film is the first to feature a black superhero.

“T’Challa is the king of Wakanda, an African nation that is the most technologically advanced society in the world and sits upon the largest deposit of an extremely rare natural resource called vibranium. As king, T’Challa bears the ceremonial title that has been born by all his predecessors. He is the spiritual leader of their nation, the defender of Wakanda, the hunter in the dark. T’Challa is the Black Panther!”

Somebody I Used to Know, by Wendy Mitchell & Anna Wharton

This was a BBC Radio 4 Book of the Week and has had a lot of word of mouth publicity, which is always the best kind.

“When Wendy Mitchell was diagnosed with dementia at the age of 58, she had to say goodbye to the woman she once was. Her career in the NHS, her ability to drive, cook and run - the various shades of her independence - were suddenly gone.

“Yet Wendy was determined not to give in. She was, and still is, propelled by a need to live in the moment, never knowing which version of herself might surface tomorrow. In this phenomenal memoir, Wendy grapples with questions most of us have never had to consider. What do you value when loss of memory reframes what you have, how you have lived and what you stand to lose? What happens when you can no longer recognise your own daughters, or even, on the foggiest of days, yourself?”

Charles I: king and collector, by Florence Dassonville

This ties in with the blockbuster exhibition at the Royal Academy.

“During his reign, King Charles I (1600-1649) assembled one of Europe’s most extraordinary art collections. By the time of his death, it contained some 2,000 paintings and sculptures. When he was executed the collection was dispersed far and wide. The exhibition brings together as many of these works as possible to give a flavour of how magnificent the original collection must have been.”

“Rose McGowan was born in one cult and came of age in another, more visible cult: Hollywood.

“In a strange world where she was continually on display, stardom soon became a personal nightmare of constant exposure and sexualisation. Rose escaped into the world of her mind, something she had done as a child, and into high-profile relationships. Every detail of her personal life became public, and the realities of an inherently sexist industry emerged with every script, role, public appearance, and magazine cover. The Hollywood machine packaged her as a sexualised bombshell, hijacking her image and identity and marketing them for profit. Brave is her raw, honest, and poignant memoir/manifesto - a no-holds-barred, pull-no-punches account of the rise of a millennial icon.”

Another Radio 4 Book of the Week. We do not get a lot of requests for books about owls but this one is proving an exception.

“Owls have captivated the human imagination for millennia. We have fixated on this night hunter as predator, messenger, emblem of wisdom, something pretty to print on a tote bag or portent of doom. Miriam Darlington sets out to tell a new story. Her fieldwork begins with wild encounters in the British Isles and takes her to the frosted borders of the Arctic. In her watching and deep listening to the natural world, she cleaves myth from reality and will change the way you think of this magnificent creature.”