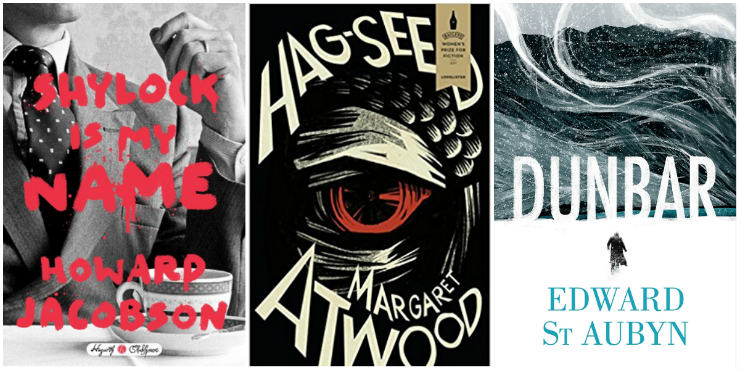 For more than four hundred years, Shakespeare’s works have been performed, read, and loved throughout the world. They have been reinterpreted for each new generation, as teen films, musicals, science-fiction flicks, Japanese warrior tales, literary transformations and more.

Since October 2015, the Hogarth Shakespeare project has been commissioning some of today’s bestselling novelists to rewrite the Bard’s work with a contemporary twist. Why not pick one up for Shakespeare Week, which runs from 12 - 18 March?

The Gap of Time: The Winter’s Tale retold, by Jeanette Winterson

“Jeanette Winterson’s version of Shakespeare’s The Winter’s Tale vibrates with echoes of the original but tells a contemporary story of betrayal, paranoia, redemption and hope. Time itself is a player in this game of high stakes that will either end in tragedy or forgiveness, showing us that, however far we have been separated, whatever is lost shall be found.”

Shylock is my Name, by Howard Jacobson

“With an absent wife and a daughter going off the rails, wealthy art collector and philanthropist Simon Strulovitch is in need of someone to talk to. So when he meets Shylock at a cemetery in Cheshire’s Golden Triangle, he invites him back to his house. It’s the beginning of a remarkable friendship.

“Elsewhere in the Golden Triangle, the rich, manipulative Plurabelle is the face of her own TV series, existing in a bubble of plastic surgery and lavish parties. She shares prejudices and a barbed sense of humour with her loyal friend D’Anton, whose attempts to play Cupid involve Strulovitch’s daughter - and put a pound of flesh on the line.”

Thought provoking, challenging and entertaining. It helps if you have some familiarity with The Merchant of Venice, but this can be read as a standalone.

Vinegar Girl: The Taming of the Shrew retold, by Anne Tyler

Anne Tyler deals with the conundrum of updating the tale of a spinster who doesn’t want to marry for the 21st century by trying to push her into a Green Card marriage.

“Kate Battista is feeling stuck. How did she end up running house and home for her eccentric scientist father and uppity, pretty younger sister Bunny? Plus, she’s always in trouble at work - her pre-school charges adore her, but the adults don’t always appreciate her unusual opinions and forthright manner.

“Dr Battista has other problems. After years out in the academic wilderness, he is on the verge of a breakthrough. His research could help millions. There’s only one problem: his brilliant young lab assistant, Pyotr, is about to be deported. When Dr Battista cooks up an outrageous plan that will enable Pyotr to stay in the country, he’s relying - as usual - on Kate to help him.”

“Felix is at the top of his game as Artistic Director of the Makeshiweg Theatre Festival. His productions have amazed and confounded. Now he’s staging a Tempest like no other: not only will it boost his reputation, it will heal emotional wounds. Or that was the plan.

“Instead, after an act of unforeseen treachery, Felix is living in exile in a backwoods hovel, haunted by memories of his beloved lost daughter, Miranda. And also brewing revenge.

“After 12 years, revenge finally arrives in the shape of a theatre course at a nearby prison. Here, Felix and his inmate actors will put on his Tempest and snare the traitors who destroyed him. It’s magic! But will it remake Felix as his enemies fall?”

This is a beautifully judged novel, so much so that it feels like a book in Margaret Atwood’s back catalogue. It is respectful to the source but there is mischief there as well as plenty of nods to contemporary culture for the more savvy reader.

“Henry Dunbar, the once all-powerful head of a global corporation, is not having a good day. In his dotage he handed over care of the family firm to his two eldest daughters, Abby and Megan. But relations quickly soured, leaving him doubting the wisdom of past decisions.

“Now imprisoned in a care home in the Lake District with only a demented alcoholic comedian as company, Dunbar starts planning his escape. As he flees into the hills, his family is hot on his heels. But who will find him first, his beloved youngest daughter, Florence, or the tigresses Abby and Megan, so keen to divest him of his estate?”

This one is fascinating. Anyone with any knowledge of Edward St Aubyn’s life and work will know that he writes about tyrannical fathers and dysfunctional families. This is a good fit for his style and certainly one of the best of the bunch.

This isn’t arriving until the beginning of April, but we know that Nesbo is going to write it as a gritty thriller. It will be interesting to see how Harry Hole’s fans take to it.

“He’s the best cop they’ve got. When a drug bust turns into a bloodbath it’s up to Inspector Macbeth and his team to clean up the mess. He’s also an ex-drug addict with a troubled past.

“He’s rewarded for his success. Power. Money. Respect. They’re all within reach. But a man like him won’t get to the top. Plagued by hallucinations and paranoia, Macbeth starts to unravel. He’s convinced he won’t get what is rightfully his. Unless he kills for it.”

There’s also Gillian Flynn’s version of Hamlet to look forward to in 2021!