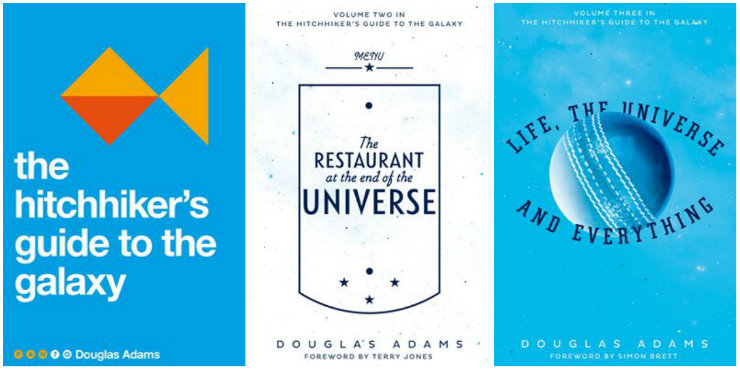 It’s 40 years since The Hitchhiker’s Guide to the Galaxy first aired on the radio. Evolving into a series of books, it became a cultural and publishing phenomenon.

Radio 4 is also celebrating the anniversary this week, with a new series based on Eoin Colfer’s And Another Thing, the sixth book in the canon, penned after Adams’ death.

The original ‘trilogy of five’

These lovely new editions from Pan are just perfect for anyone looking to read the series for the first time or revisit them after a break (other editions are available).

The Hitchhiker’s Guide to the Galaxy

“One Thursday lunchtime Earth is unexpectedly demolished to make way for a new hyperspace bypass. For Arthur Dent, who has only just had his house demolished that morning, this is already more than he can cope with. Sadly, however, the weekend has only just begun. And the Galaxy is a very, very large and startling place indeed.”

The Restaurant at the End of the Universe

“The crew of the Heart of Gold plan to go for breakfast at Milliways - the restaurant at the end of the Universe. There is just the small matter of escaping the Vogons, avoiding being taken to the most evil world in the galaxy and teaching a spaceship how to make a proper cup of tea.”

Life, the Universe and Everything

“After a series of events which have involved Arthur Dent being alternately blown up and insulted in more bizarre regions of the Galaxy than he has ever dreamt existed, he finds himself stranded on Prehistoric Earth.”

Check out the audiobook version of Life, the Universe and Everything →

So Long, and Thanks for All the Fish

“Arthur Dent meets Fenchurch, the girl of his dreams. Fenchurch knows how the world could be made a good and happy place. Unfortunately she’s forgotten. Convinced that the secret lies within God’s final message to his creation they go in search of it. And in a dramatic break with tradition - actually find it.”

Check out the audiobook version of So Long, and Thanks for All the Fish →

“Arthur Dent hasn’t had a day as bad as this since the Earth was blown up. Depressed and alone, Arthur settles on the small planet Lamuella and becomes a sandwich maker. Looking forward to a quiet life, his plans are thrown awry by the unexpected arrival of his daughter.”

Check out the audiobook version of Mostly Harmless →

And Another Thing is also available as an audiobook.

Other favourites from Douglas Adams

“Dirk Gently, self-styled private investigator, sets out to prove the fundamental interconnectedness of all things by solving a mysterious murder, assisting a mysterious professor, unravelling a mysterious mystery, and eating a lot of pizza - not to mention saving the entire human race from extinction along the way (at no extra charge).”

Adams himself described this as a “thumping good detective-ghost-horror-whodunnit-time-travel-romantic-musical-comedy-epic”. What’s not to love?

You can also watch the TV adaptation of Dirk Gently, with the perfectly cast Stephen Mangan and Darren Boyd.

The Long Dark Tea-time of the Soul

“When a check-in desk at Heathrow Airport shot up through the roof engulfed in a ball of orange flame, the usual people tried to claim responsibility - the IRA, the PLO and the Gas Board. No rational cause could be found for the explosion - it was simply designated an act of God. But, thinks Dirk Gently, which God? And why?”

The Salmon of Doubt: hitchhiking the galaxy one last time

“This title brings together eleven chapters of an unfinished ‘Dirk Gently’ novel, a collection of short stories and non-fiction pieces retrieved from the hard drive of Douglas Adams’ computer, as well as lectures and articles on subjects as diverse as religion and the letter Y.”

“After years of reflecting on the absurdities of life on other planets, Douglas Adams teamed up with zoologist Mark Carwardine to find out what was happening to life on this one. Together they lead us on an unforgettable journey across the world in search of exotic, endangered creatures that they may never see again.”

And if you want to find out more about the author and the universe he created, have a read of The Frood: the authorised and very official history of Douglas Adams & The Hitchhiker’s Guide to the Galaxy, by Jem Roberts.