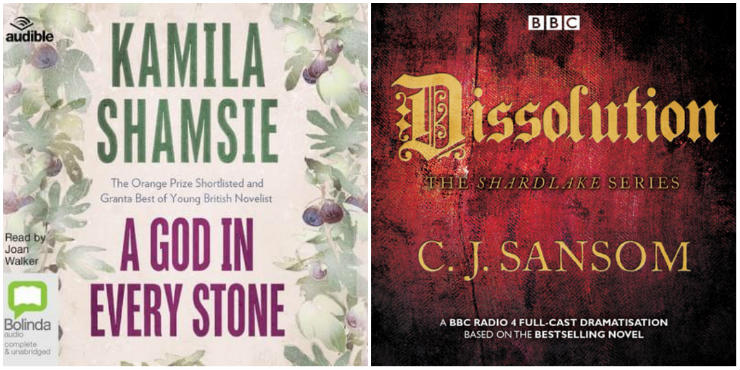 Want to hear something good? We’ve picked out some of our favourite historical fiction eAudiobooks.

The Queen’s Captive, written and read by Barbara Kyle

“England, 1554. In the wake of the failed Wyatt Rebellion, a vengeful Queen Mary has ordered all conspirators captured and executed…

“Among the imprisoned is the Queen’s own sister, 21-year-old Princess Elizabeth. Though she protests her innocence, Elizabeth’s brave stand only angers Mary more. Elizabeth longs to gain her liberty - and her sister’s crown.

“In Honor and Richard Thornleigh and their son, Adam, the young princess has loyal allies. Disgusted by Queen Mary’s proclaimed intent to burn heretics, Honor visits Elizabeth in the Tower and they quickly become friends. And when Adam foils a would-be assassin, Elizabeth’s gratitude swells into a powerful - and mutual - attraction. But while Honor is willing to risk her own safety for her future queen, aiding in a new rebellion against the wrathful Mary will soon lead her to an impossible choice.”

God in Every Stone, by Kamila Shamsie, read by Joan Walker

“In the summer of 1914 a young Englishwoman, Vivian Rose Spencer, finds herself fulfilling a dream by joining an archaeological dig in Turkey. Working alongside Germans and Turks, she falls in love with archaeologist, Tahsin Bey, and joins him in his quest to find an ancient silver circlet. The outbreak of war in Europe brings her idyllic summer to a sudden end, and her friends become her nation’s enemies.

“The following spring, in the battlefields of Europe, Qayyum Gul, a Lance Corporal from Peshawar fighting for the British, loses an eye, and is sent to recover in a Royal Pavilion in England, where he slowly begins to doubt his loyalties to the King. Returning home, Qayyum shares a train carriage with Vivian Rose whose search for the circlet has led her to Peshawar in the heart of the British Raj. Fifteen years later, they will meet again, and their loyalties will be tested once more amidst massacres, cover-ups, and the disappearance of a young man they both love.”

Bicycles and Blackberries, by Sheila Newberry, read by Katy Sobey

“The East End, 1939. When war comes to London, the bright and irrepressible Georgia Smith is torn from her tight-knit family and packed off as an evacuee.

“She moves in with Phoebe Bliss, whose cheerful smile masks a dark past that ten year-old Georgia couldn’t possibly understand. Georgia soon finds herself involved in the small town’s complicated love lives. But some secrets aren’t meant for little girls, and she finds herself in danger.

“Can a good heart keep a mischievous girl out of trouble?”

“When Katherine of Aragon is brought to the Tudor court as a young bride, the oldest princess, Margaret, takes her measure. With one look, each knows the other for a rival, an ally, a pawn, destined - with Margaret’s younger sister Mary - to a sisterhood unique in all the world. The three sisters will become the queens of England, Scotland, and France.

“United by family loyalties and affections, the three queens find themselves set against each other. Katherine commands an army against Margaret and kills her husband James IV of Scotland. But Margaret’s boy becomes heir to the Tudor throne when Katherine loses her son. Mary steals the widowed Margaret’s proposed husband, but when Mary is widowed it is her secret marriage for love that is the envy of the others.

“As they experience betrayals, dangers, loss, and passion, the three sisters find that the only constant in their perilous lives is their special bond, more powerful than any man, even a king.”

With All Despatch, by Alexander Kent, read by Michael Jayston

“A troubled peace with France means that in the harbours and estuaries around England, the royal fleet has been left to rot. Even a frigate captain as famous as Richard Bolitho is forced to swallow his pride and visit the Admiralty daily to plead for a ship. As the clouds of war begin to rise once more over the Channel, he has no choice but to accept an appointment to the Nore.

“With his small flotilla of three topsail cutters Bolitho sets out to search the coast for seamen who have fled the harsh discipline of His Majesty’s Navy for the more tempting rewards of smuggling. But the ‘Brotherhood’ he comes up against are brutal and dangerous with a secret, sinister trade in human misery. Treason is never far distant and murder commonplace. So when a King’s ransom is in peril and Bolitho is ordered to proceed ‘with all despatch’ to recover it he will need all the loyalty and courage of his three gallant cutters if he is to fulfil his mission.”

“Cornwall 1792. Ross plunges into a highly speculative mining venture which threatens not only his family’s financial security, but also his turbulent marriage to Demelza.

“When Ross and Elizabeth’s old attraction rekindles itself, Demelza retaliates by becoming dangerously involved with a handsome Scottish cavalry officer. With bankruptcy an increasingly real possibility, the Poldarks seem to be facing disaster on all fronts.”

The Toymaker, by Liam Pieper, read by Damien de Montemos

“Adam Kulakov likes his life. He’s on the right side of middle age; the toy company he owns brightens the lives of children around the world; and he has more money than he can ever spend, a wife and child he adores, and as many mistresses as he can reasonably hide from them.

“And he is not the only one with secrets. In 1944, Adam’s grandfather, Arkady, was imprisoned in Auschwitz and given an impossible choice. Now, as he’s coming to the end of his life, he has to keep the truth from his family, and hold back the crushing memories of his time with one of history’s greatest monsters.

“As a mistake threatens to bring Adam’s world tumbling down around him, the past reaches for Arkady. Everything he’s spent a lifetime building will be threatened, as will everything Adam and his family think they know of the world.”

“Winter, 1537. Henry VIII has declared himself Supreme Head of the Church, and instructed his chief minister Thomas Cromwell to dissolve England’s religious houses and seize their wealth. But Cromwell’s plot to bring down the abbeys has hit a snag – one of the King’s Commissioners has been found brutally murdered in Scarnsea monastery, on the south coast of Kent. If news of the killing were to get out, the consequences could be disastrous.

“Desiring a quick, discreet result, he sends his trusted lawyer-detective, Matthew Shardlake, to investigate. However, as Shardlake interviews the prime suspects and delves deeper into the mysteries of Scarnsea, it soon becomes clear that the case will not be as simple to solve as he had hoped. Which of the terrified monks is the murderer? And can Shardlake catch him before he strikes again?”