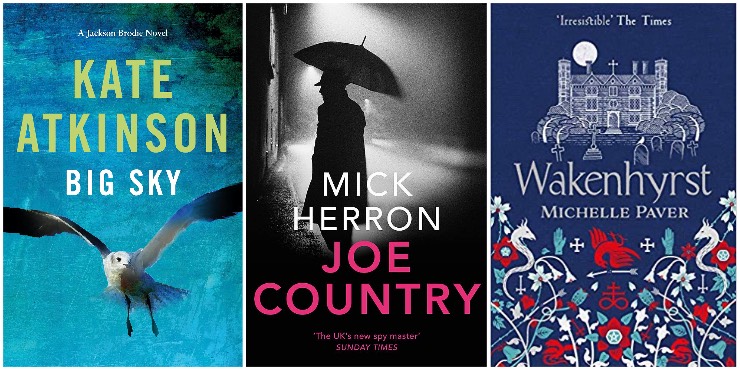 At the end of every year, we pick out ten titles that have particularly drawn our attention over the past 12 months. These are a mixture of our most popular books and releases of outstanding quality we hope will continue to issue in 2020 and beyond.

We enjoy receiving your stock suggestions of all shapes and sizes and try to order as many of them as we can. Some of our best titles come from reader suggestions and we see and consider all of them.

I hope you enjoy this list and thank you to everyone who has sent in a stock suggestion in 2019. Thank you particularly for ‘Mojo Joyes’ and ‘Richard’ Pullman as suggestions!

An obvious choice, as this was the publishing event of the year. It gave Margaret Atwood a share of the 2019 Booker Prize.

“When the van door slammed on Offred’s future at the end of The Handmaid’s Tale, readers had no way of telling what lay ahead. With The Testaments, the wait is over. Margaret Atwood’s sequel picks up the story 15 years after Offred stepped into the unknown, with the explosive testaments of three female narrators from Gilead.”

Set in Edwardian Suffolk, this will undoubtedly be a book group read for many years to come. Michelle Paver visited Suffolk to promote it and also did a Meet the Author interview.

“In Edwardian Suffolk, a manor house stands alone in a lost corner of the Fens: a glinting wilderness of water whose whispering reeds guard ancient secrets. Maud is a lonely child growing up without a mother, ruled by her repressive father. When he finds a painted medieval devil in a graveyard, unhallowed forces are awakened.

“Maud’s battle has begun. She must survive a world haunted by witchcraft, the age-old legends of her beloved fen - and the even more nightmarish demons of her father’s past.

“Spanning five centuries, Wakenhyrst is a darkly gothic thriller about murderous obsession and one girl’s longing to fly free.”

Interiors: the greatest rooms of the century, by Phaidon

The very definition of a coffee table book. If you have any plans to decorate in 2020, this will give you plenty of ideas.

“A stunning collection of the best living spaces created and commissioned by the most influential people in interior design, Interiors is the ultimate global celebration of residential interior design and decorating. With 400 rooms organised by designer from A-Z, the book goes beyond decorators, designers and architects to highlight exquisite interiors designed by fashion designers, artists, style icons and film stars who have made a unique contribution to the world of interior design. “

A publishing phenomenon. Although the subtitle suggests that these are slimming recipes, the emphasis is on healthy eating. This is a book I would buy for myself rather than just borrow, but feel free to borrow it first!

A potter’s first novel is perhaps not the most promising proposition, but this book, which is reminiscent of John Fowles in places, is a chilling gothic tale.

“Jackson Brodie has relocated to a quiet seaside village in North Yorkshire, in the occasional company of his recalcitrant teenage son Nathan and ageing Labrador Dido, both at the discretion of his former partner Julia. It’s a picturesque setting, but there’s something darker lurking behind the scenes. Jackson’s current job, gathering proof of an unfaithful husband for his suspicious wife, seems straightforward, but a chance encounter with a desperate man on a crumbling cliff leads him into a sinister network - and back into the path of his old friend Reggie.”

Homesick: why I live in a shed, by Catrina Davies

“The story of a personal housing crisis that led to a discovery of the true value of home.

“Aged 31, Catrina Davies was renting a box-room in a house in Bristol, which she shared with four other adults and a child. Working several jobs and never knowing if she could make the rent, she felt like she was breaking apart. Homesick for the landscape of her childhood, in the far west of Cornwall, Catrina decides to give up the box-room and face her demons. As a child, she saw her family and their security torn apart; now, she resolves to make a tiny, dilapidated shed a home of her own.

“With the freedom to write, surf and make music, Catrina rebuilds the shed and, piece by piece, her own sense of self. On the border of civilisation and wilderness, between the woods and the sea, she discovers the true value of home, while trying to find her place in a fragile natural world.”

This one is a bit of a personal highlight. I have read and enjoyed all Mick Herron’s Slough House books and recommended him to anyone who will listen. I finally met the man himself at Murder Will Out in Cambridge earlier this year. I had a brief chat and told him how much I enjoyed his books, then found myself bumping into him constantly throughout the day.

“In Slough House memories are stirring, all of them bad. Catherine Standish is buying booze again, Louisa Guy is raking over the ashes of lost love, and new recruit Lech Wicinski, whose sins make him outcast even among the slow horses, is determined to discover who destroyed his career, even if he tears his life apart in the process.

“Meanwhile, in Regent’s Park, Diana Taverner’s tenure as First Desk is running into difficulties. If she’s going to make the Service fit for purpose, she might have to make deals with a familiar old devil. And with winter taking its grip Jackson Lamb would sooner be left brooding in peace, but even he can’t ignore the dried blood on his carpets. So when the man responsible breaks cover at last, Lamb sends the slow horses out to even the score.”

Diary of a Somebody, by Brian Bilston

Part fiction, part poetry, part diary. To my mind there was nothing published in 2019 quite like this. Perfect for those who enjoy wordplay, it is so clever and witty and full of popular culture references. Brian Bilston also wrote us an original poem for Meet the Author this year.

The Book of Dust Volume 2: The Secret Commonwealth, by Philip Pullman

This one probably falls under Young Adult rather than adult fiction but there are a few places where, in this reader’s opinion, it tips into the former category. As it is dark outside this time of year this is one to enjoy with a hot drink beside you as you immerse yourself in Pullman’s world. A word of warning to readers though, this is to be continued…

“The Secret Commonwealth sees Lyra, now 20 years old, and her daemon Pantalaimon forced to navigate their relationship in a way they could never have imagined, and drawn into the complex and dangerous factions of a world with a strong sense of duty and a desire to do what is right.

“Theirs is a world at once familiar and extraordinary, and they must travel far beyond the edges of Oxford, across Europe and into Asia, in search for what is lost - a city haunted by daemons, a secret at the heart of a desert, and the mystery of the elusive Dust.that they had no idea existed. Pulled along on his own journey too is Malcolm; once a boy with a boat and a mission to save a baby from the flood, now a man.”