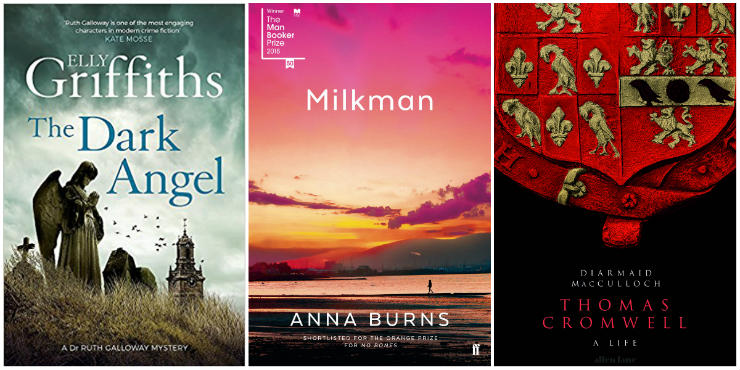 At the end of every year, we pick out ten titles that have particularly drawn our attention over the past 12 months. These are a mixture of our most popular books and releases of outstanding quality we hope will continue to issue in 2019 and beyond.

The Dark Angel, by Elly Griffiths

“Dr Ruth Galloway is flattered when she receives a letter from Italian archaeologist Dr Angelo Morelli, asking for her help. He’s discovered a group of bones in a tiny hilltop village near Rome but doesn’t know what to make of them. It’s years since Ruth has had a holiday, and even a working holiday to Italy is very welcome! So Ruth travels to Castello degli Angeli, accompanied by her daughter Kate and friend Shona.

“In the town she finds a baffling Roman mystery and a dark secret involving the war years and the Resistance. To her amazement she also soon finds Harry Nelson, with Cathbad in tow. But there is no time to overcome their mutual shock - the ancient bones spark a modern murder, and Ruth must discover what secrets there are in Castello degli Angeli that someone would kill to protect.”

This was Elly’s first book of 2018 and for us it confirmed her step up to the highest level of popularity. Lee Child may still be Suffolk’s favourite author in terms of waiting lists for reservations, but he no longer has the field to himself.

Another author on the rise is Mick Herron. Readers in Suffolk have taken the failed spies and ‘screw ups’ of Slough House to their hearts and always eagerly await the next instalment.

“‘London Rules’ might not be written down, but everyone knows rule one. Cover your arse.

“Regent’s Park’s First Desk, Claude Whelan, is learning this the hard way. Tasked with protecting a beleaguered prime minister, he’s facing attack from all directions himself: from the showboating MP who orchestrated the Brexit vote, and now has his sights set on Number Ten; from the showboat’s wife, a tabloid columnist, who’s crucifying Whelan in print; from the PM’s favourite Muslim, who’s about to be elected mayor of the West Midlands, despite the dark secret he’s hiding; and especially from his own deputy, Lady Di Taverner, who’s alert for Claude’s every stumble.

“Meanwhile, the country’s being rocked by an apparently random string of terror attacks, and someone’s trying to kill Roddy Ho.”

The 2018 Man Booker winner. Set in Belfast, it is the story of a young bookish girl who begins an affair with the eponymous ‘milkman’, who is a senior paramilitary figure.

This was perhaps the most experimental of the books on the longlist, with Belinda Bauer’s thriller Snap appealing to more borrowers. However, there has been an upsurge in reservations for Milkman since it was announced as the winner.

“Thomas Cromwell is one of the most famous figures in English history. Born in obscurity in Putney, he became a fixer for Cardinal Wolsey in the 1520s and, when Wolsey had fallen for failing to solve Henry VIII’s ‘Great Matter’ - lack of a male heir and efforts to repudiate his wife Katherine of Aragon, was promoted him to a series of ever greater offices, such that in the 1530s he was effectively running the country for the King.

“That decade was one of the most momentous in English history: it saw a religious break with the Pope, unprecedented use of parliament, the dissolution of all monasteries, and the coming of the Protestantism. Cromwell was central to all this, but establishing his role with precision has been notoriously difficult. Diarmaid MacCulloch’s biography makes connections not previously seen and reveals the channels through which power in early Tudor England flowed.”

It is unusual for us to have a long waiting list for a 728-page non-fiction book but this is the exception. The endorsement from Hilary Mantel (“the biography we have been awaiting for 400 years”) probably didn’t do any harm either.

Fire and Fury: inside the Trump White House, by Michael Wolff

Fire and Fury was the first in a rush of ‘tell all’ books about life in the Trump White House. For a few weeks everyone wanted to read this. By the end of 2018 you can easily find a copy and Amazon has discounted the hardback to £5, which surely tells us something.

In a year when Peter Jackson and his team painstakingly coloured film of WW1 soldiers for his film They Shall Not Grow Old, this was a huge step forward for the medium of colouring old pictures to bring them to a wider audience.

Marina Amaral took photographs from the past which were in black and white and used digital techniques to colour them so we see them as we would see the world around us. The effects are startling – look at the illustration of Lewis Powell or The Nine Kings and marvel at the work that must have gone into creating the coloured image. This is one of my favourite books of the year.

Shardlake’s seventh case is set in Norwich in 1549. Interestingly the publication of this new title has sent a lot of readers back to find the earlier books in the series.

“Two years after the death of Henry VIII, England is sliding into chaos. The nominal king, Edward VI, is eleven years old. His uncle Edward Seymour, Lord Hertford, rules as Protector. The extirpation of the old religion by radical Protestants is stirring discontent among the populace while the Protector’s prolonged war with Scotland is proving a disastrous failure and threatens to involve France. Worst of all, the economy is in collapse, inflation rages and rebellion is stirring among the peasantry.

“Since the old King’s death, Matthew Shardlake has been working as a lawyer in the service of Henry’s younger daughter, the Lady Elizabeth. The gruesome murder of Edith Boleyn, the wife of John Boleyn - a distant Norfolk relation of Elizabeth’s mother - which could have political implications for Elizabeth, brings Shardlake and his assistant Nicholas Overton to the summer assizes at Norwich.”

Blowing the Bloody Doors Off and other lessons in life, by Michael Caine

“With over 100 movies to his credit over six decades, Hollywood legend and British national treasure Michael Caine shares the wisdom, stories, insight and skills that life has taught him in his remarkable career - and now his 85th year.

“Caine has excelled in every kind of role - with a skill that’s made it look easy. He knows what success takes - he’s made it to the top of his profession from the toughest beginning. But as he says ‘Small parts can lead to big things. And if you keep doing things right, the stars will align when you least expect it’.

“Now in his 85th year he wants to share everything he’s learned. With brilliant new insight into his life and work and with his wonderful gift for story, this is Caine at his wise and entertaining best.”

Perhaps an unusual choice, but there has been a boom in Korean literature and recently a book by ‘the Korean Henning Mankell’, The Plotters by Un-su Kim, was snapped up after a bidding war and is due at the end of January 2019.

The Good Son was the first of these titles to break through. It tells the story of a seemingly perfect student, who wakes up covered in blood, with the body of his mother downstairs. Is this a one off or a trend we will see in 2019?