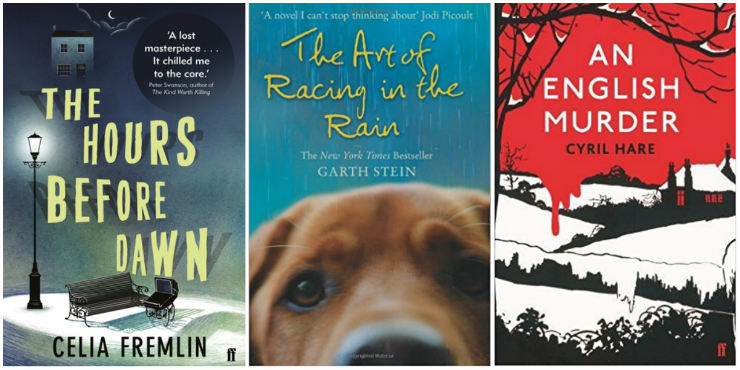 Our stock librarians are full of knowledge about the best books. Here, Brandon King tells us which books he thinks should more people should borrow from our libraries.

The Hours Before Dawn, by Celia Fremlin

Celia Fremlin is a name you may have heard in passing but you might not know much about her. This novel won the 1960 Edgar Award for best mystery novel but is all but forgotten now. It is set in the 1950s and centres around a harrassed mother with small children (Louise Henderson). They decide to take in a lodger, Miss Brandon, but Louise becomes increasingly worried about the woman she has let into their home.

We’re not sure this one is hidden anymore as it has been re-discovered by book groups and is now a staple title. Occasionally there is a word-of-mouth success and this one probably takes that title. It does not race along but it is beautifully written and concerns William Stoner’s journey through life as he tries to find a place for himself in the world.

The Art of Racing in the Rain, by Garth Stein

If you like dogs you will enjoy this. Meet Enzo the dog who is owned by Denny, a racing driver. Enzo narrates the story. It sounds dreadful but it is really moving and makes you look at things differently.

This series, available in its entirety in eBook format (our physical coverage is more patchy, but once you’ve read a couple, you’ll be requesting inter-library loans of the rest!) covers one hundred years of the Whiteoak family from 1854 to 1954. The 16 Jalna novels were not written in sequential order, however, and each can be read as an independent story. Librarians of a certain age tend to wax lyrical about these.

Although he is 83 years old and lives in a residential care home in the Netherlands, Hendrik Groen doesn’t like old people. Their zimmer frame shuffling, unreasonable impatience, endless complaints, their tea and biscuits, smells or creaking bodies. He decides to write a whistleblowing diary that tells everyone what it is really like to be old. It is funny and moving and would probably make a good film one day.

When most people think of Jack London they remember being forced to read The Call of the Wild at school. Martin Eden is a thinly veiled account of London’s own struggles to succeed as a writer and rise above his low standing in life. It is a terrific read and deserves a wider readership than certain of his other books.

An English Murder, by Cyril Hare

Cyril Hare is one of the great undiscovered crime writers of the past. This is a classic of the ‘shut in a stately home with a murderer loose’ genre. If you have read all the Agatha Christies and want to try something a little different, this is worth a shot. We recently chose this as one of our Suffolk Loves series to give it a wider readership.

A Manual for Cleaning Women: selected stories, by Lucia Berlin

How Lucia Berlin has not become one of the great names in literature is an enduring mystery. This volume pulls together some of her best stories in one place. At her best, some of these stories are touched by genius, while some are commonplace. If you read this you will either wonder what the fuss is about or embark on a quest to find everything she ever wrote.

Mrs Palfrey at the Claremont, by Elizabeth Taylor

This a beautifully-written story about getting old. Elizabeth Taylor is a neglected writer nowadays but this is one of her best.