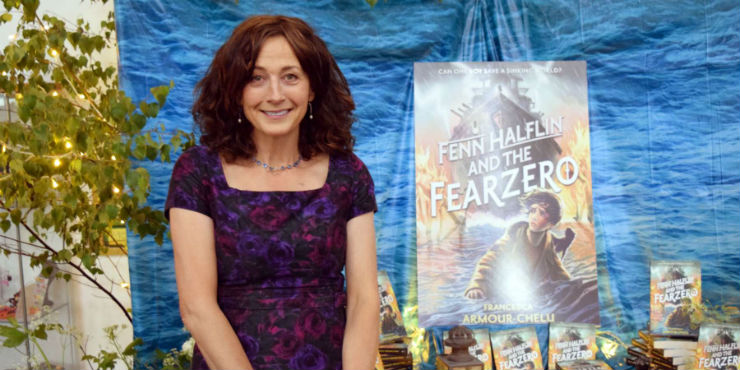 Francesca Armour-Chelu is Suffolk Libraries’ very own published children’s author. She recently published her second novel, Fenn Halflin and the Seaborn, the sequel to 2016’s Fenn Halflin and the Fearzero, which was shortlisted for the Mslexia Children’s Novel Competition and in the Children’s category at the 2016 East Anglian Book Awards. This epic series, set in a dystopian flooded future, is available from all good bookshops as well as our libraries.

We asked Francesca to tell us the secrets of her success.

It’s hard to choose. I had particular books I just kept returning to and are still ones I read. The Pippi Longstocking books still make me laugh out loud and when I’m feeling a bit woebegone or sorry for myself I curl up in bed and read them again. There’s something very consoling about a book you loved as a kid.

I wasn’t a strong reader though, so I also loved comics, picture books and novelty books and had a fabulous pop-up book called Haunted House by Jan Pienkowski, full of cardboard levers and cogs, which is sadly now in pieces after I gave it to my own children to play with and read. It’s full of sly humour: a skeleton doing a can-can high kick out of a wardrobe door, the stereotypical 1950s plaster wall ducks are possessed and flap their wings.

Like all kids I also loved Roald Dahl; so dark and yucky, and I adored King of the Copper Mountains by Paul Biegel, a book that strangely seems to have slipped beneath the radar because I never meet people who know of it. It’s very eerie and deserves a wider readership.

I love illustrations in books, especially by people like Victor Ambrus, Charles Keeping, Edward Ardizzone and Edmund Dulac. If I could make one change to books it’d be to bring back illustrations; it’s a great loss not to have them. I’d love to see grown up books illustrated too, like they used to be.

2. Seaborn was your ‘difficult second book’. How did writing this one compare to Fearzero?

I found it ridiculously difficult. I realise now that the first book had evolved glacially slowly! I had had the luxury of slowly coaxing it along without anyone even knowing I was writing; my agent had read it and given me very helpful advice, so it had already been rewritten twice by the time Walker Books even got to see it.

With Fenn Halflin and the Seaborn it was so different. First there was the pressure of time; it had to be published within roughly a year of book one, so I had this mental stop-watch clicking away every second. But also I had no one to look over it, so it was shown to Walker at the first draft. I remember sitting with my editors and suddenly realising the manuscript had some awful continuity problems; people popping up on boats when we’d last seen them on land, time jumps or the sun rising twice on the same day. Goofy stuff like that. It was horrible - I broke out in a cold sweat! Let’s just say they were incredibly polite and kind and gave me time to put things right!

3. There are hints of Dickens in some of the supporting cast in Fearzero. Was he an influence?

Maybe…! I read English and Drama at Goldsmiths so have read lots of Dickens, and I also knew bits of Mayhew’s London Labour and the London Poor.

But I think the influences might be more from art; my mum and dad were both painters so when I was growing up I saw a lot of paintings and have always drawn people as well. I like non-studio portraits by people like Diane Arbus and Nick Hedges, and I love watching people. I also go to as many galleries as I can and particularly love portraits; I recently spent a couple of days in Paris for the first time ever and walking around the Louvre I just kept thinking ‘that’s going to be so and so in the next book’ or ‘there’s my villain!’

4. We seem to be living in an era of great writing for children and young adults. Why do you think this is?

I don’t feel well-read enough to know if I agree with that … or if I could venture a reason why if I did. Is the actual writing better than it was 20 years ago? Some people think publishers are getting more cautious; I’m sure I read somewhere that if Roald Dahl were writing today he wouldn’t have found a publisher.

On the other hand it does feel like children’s books are generally better known about and adults feel fine about reading kids’ stuff, which I think is great. Maybe the interest in kids’ books is also helped because there are more forums where people can talk about books and writing – such as this website. It sort of feels like it’s almost fashionable to be ‘into’ kids’ books; people posting book cover art on Instagram, sites like Goodreads designed a bit like Facebook.

5. How do you balance working in a library with the demands of your literary career?

I am incredibly lucky in that respect - I have a very understanding manager who has done everything she could to support me, and my colleagues have been very supportive too.

But it is hard sometimes. You might have a deadline for your editor and you’re also working a long day at the library so you know the minute you get home you’ll have to start work again, on your manuscript. You get in and you feel wiped out (library work isn’t cushy) but you also have to get supper ready for the kids and help them with their maths homework, the usual stuff, and all the time you’re fretting about that bit of writing you still have to do.

It’s one of the main things people often don’t understand; they think because reading books is lovely and relaxing, then writing must be lovely too. It’s not; it’s a job, and like all jobs it can be stressful. Even kids’ writers can be slumped in tears over their keyboard at 3am because a chapter isn’t working. But all that to one side, I know I’m incredibly privileged to be doing these two jobs; the best jobs in the world. I wouldn’t trade them.

I can’t really go into detail as it’s all a bit too early, at pitching stage. All I can say is I’m doing a bit of plate spinning right now!

I had already started an adult story when Walker books bought Fenn Halflin and the Fearzero, and when I finished Fenn Halflin and the Seaborn, I naively thought I’d segue straight back to completing it. But life isn’t neat like that; writing Fenn stimulated ideas for other children’s books, and also Walker asked me for a third book, which is a fantastic opportunity. So I’ve just finished the outline for a brand new children’s book and I’m carrying on with the adult book, which is set in East Anglia. The only question is where to find the time!

7. Do you have a message for your many young (and old) readers in Suffolk Libraries?

Please tell everyone how great Suffolk Libraries are and get all your friends to sign up for a library card! Authors and libraries need you readers.

Also I have a plea on behalf of all authors, especially kids’ writers; if you like a book please review it … anywhere! On the Suffolk Libraries website, on Goodreads or any online booksellers - you don’t have to have bought the book from Amazon to review it on there. Children’s books account for roughly 30% of published books, but only get about 3% of review space. Kids’ writers need their fans to help spread the word.

Lastly, if you read my books, I really hope you enjoy them.