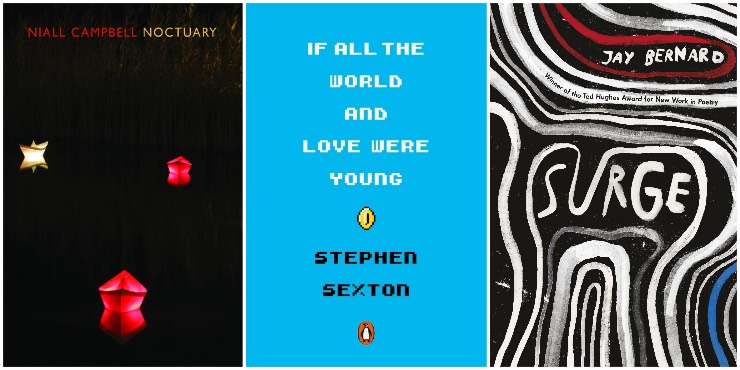 The titles on this year’s Forward Prizes for Poetry shortlists blur the boundaries between poetry and other genres, and grapple with timely and important subjects.

The awards recognise the Best Collection, Best First Collection, and Best Single Poem (usually printed in magazines) of 2019, and the winners will be announced on Sunday 20 October at the end of Southbank Centre’s Poetry International festival.

“Violence hangs over this book like an electric storm. Beginning with a poem about the teenage dawning of sexuality, Vertigo & Ghost pitches quickly into a long sequence of graphic, stunning pieces about Zeus as a serial rapist, for whom woman are prey and sex is weaponised.

“These are frank, brilliant, devastating poems of vulnerability and rage, and as Zeus is confronted with aggressions both personal and historical, his house comes crumbling down. A disturbing contemporary world is exposed, in which violent acts against women continue to be perpetrated on a daily - hourly - basis. The book shifts, in its second half, to an intimate and lyrical document of depression and family life.”

“A noctuary is a diary for the late hours. In Niall Campbell’s poems, this is a time for reflection, discovering what it means to be a young father, anxious, caring and protective, deeply connected to the new, precious life of another human being. The deftly lyrical poems in his second collection illuminate a night world of disturbed sleep and half dream, midnight feeds, the quiet of snowfall through the hours of dark.

“At the same time the grown man now living in the city reconnects with his own childhood on South Uist in the Outer Hebrides, the territory of his highly praised first collection, Moontide. Hearing his father’s voice in how he calls to his son, other images of the island’s seascapes, myths and wildlife return to him in Noctuary.”

“Deaf Republic opens in a time of political unrest in an occupied territory. It is uncertain where we are or when, in what country or during what conflict, but we come to recognise that these events are also happening here, right now.

“This astonishing parable in poems unfolds episodically like a play, its powerful narrative provoked by a tragic opening scene: when soldiers breaking up a protest kill a deaf boy, the gunshot becomes the last thing the citizens hear - in that moment, all have gone deaf. Inside this silence, their dissent becomes coordinated by sign language. The story then follows the private lives of townspeople encircled by public violence.”

“Ravinthiran’s second collection is a book of sonnets for his wife. These are love poems that turn analytical, consider the world, and stand for a larger community, including readers themselves. Many describe life in the North East for a mixed-race couple, considering both the redemptive force of love and the cultural origins of our discontent.”

City of Departures, by Helen Tookey

“City of Departures is a collection of uncanny spaces and fleeting encounters, an urban patchwork of glimpsed moments and chance affiliations. Through them, Tookey explores the ways in which we create meaning and connection in these kinds of spaces, and how the nature of those connections - often temporary and provisional - affects who we are, and who we are becoming.”

The Perseverance, by Raymond Antrobus

“An extraordinary debut from a young British-Jamaican poet, The Perseverance is a book of loss, language, and praise. One of the most crucial new voices to emerge from Britain, Raymond Antrobus explores the d/Deaf experience, the death of his father and the failure to communicate.

“Ranging across history, time zones and continents, this book operates in the in betweens - of dual heritages, of form and expression - emerging to show us what it means to exist, and to flourish.”

“Jay Bernard’s powerful debut is a queer exploration of the black British archive, tracing a line between two significant events in recent British history: the New Cross Massacre of 1981 in which thirteen young black people were killed in a house fire, and the Grenfell Tower fire in 2017. The collection stems from research undertaken about the New Cross Fire during a 2016 residency at the George Padmore Institute.”

“On 15 April 1989, during the opening minutes of the FA Cup semi-final between Nottingham Forest and Liverpool, 96 men, women and children died in what remains the most serious tragedy in UK sporting history - the Hillsborough Stadium disaster. Thousands more suffered physical injury and long-term psychological harm.

“For almost thirty years the survivors and the families of the dead had to campaign against the police, government and media who blamed the supporters for the tragedy. Eventually, in 2016 a second inquest ruled that the supporters were unlawfully killed due to failures of the police and ambulance services.

“Published to mark the 30th anniversary of the disaster, Truth Street combines the eye-witness testimonies of the survivors at the second inquest to create an epic-poem that is part oral history and part documentary theatre.”

Significant Other, by Isabel Galleymore

“In her first book of poems, Isabel Galleymore takes a sustained look at the ‘eight million differently constructed hearts’ of species currently said to inhabit the earth. These are part of the significant other of her title; so too are the intimacies - loving, fraught, stalked by loss and extinction - that make up a life.”

If All the World and Love Were Young, by Stephen Sexton

“Memories of going ‘through the looking-glass’ into the land of video games are some of the most evocative of all childhood. In these poems we are rushed back to years spent playing Super Mario World, a place where people are small and flowers are large, a place of treacherous labyrinths and heart-stopping leaps of faith, where the materiality, wonder and peril of that world bleeds into our own as the young player bravely travels with his mother on the journey of her life-ending illness.

“Drawing on traditions of elegy and pastoral, this is a daring, moving and lyrically beautiful exploration of memory, grief and the unreal.”