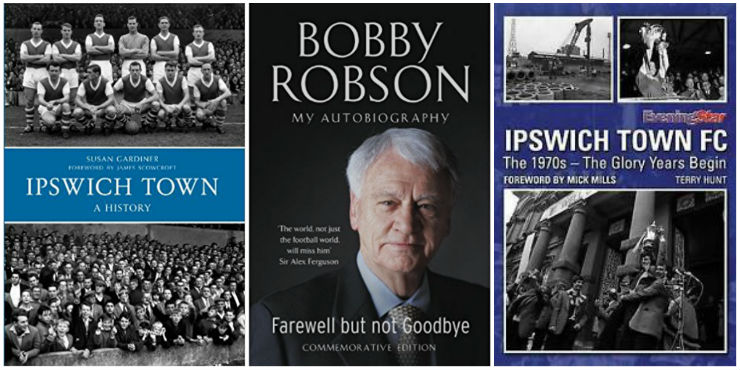 Sunday 6 May is the 40th anniversary of Ipswich Town’s FA Cup victory. We’ve picked out some great books to mark the occasion.

Want to reminisce about the Blues with like-minded fans? Have a look at our Sporting Memories groups.

“The 1970s was the greatest decade in the history of Ipswich Town Football Club, and now all the memories have been encapsulated in one book. The book includes more than 300 photographs from the archives of the East Anglian Times and Evening Star newspapers.”

On the Map: Sir Bobby Robson: the Ipswich Town years, by Nick Fuller

Bobby Robson was manager of Ipswich Town during the most successful period in their history. This book takes us back to that time.

Bobby Robson: farewell but not goodbye: my autobiography, by Bobby Robson & Paul Hayward

“Sir Bobby Robson, national icon and widely admired footballing legend, tells his life story - from his playing days with Fulham and West Brom in the 1950s and 60s, his 20 England caps to his management career over the past 38 years. He also remembers epic incidents from the ‘Hand of God’ to the tears of Gazza.”

By 2009 Bobby Robson had left Ipswich and gone on to success with England and in Europe. This autobiography covers his later career but also touches on his time at Ipswich Town.

Kevin Beattie was one of the stars of the 1978 FA Cup team but his career was wrecked by injury. The Beat tells his story.

This book in the Images of Sport series tells the full story of Ipswich Town, including many pictures of their greatest moments.

Wark On, by John Wark

This book concentrates on Wark’s first spell at Ipswich and his time at Liverpool. It also includes tales from his time on the film set of Escape to Victory.

Got, Not Got: the lost world of Ipswich Town, by Derek Hammond & Gary Silke

This is the kind of book you can dip into at will. You will find heroes of the past and pictures of big match programmes, football cards and petrol freebies covering the glory years and the 1978 Cup win.

“This book presents the history of Ipswich Town Football Club, tracing some of the many ways it has changed and developed over time.”