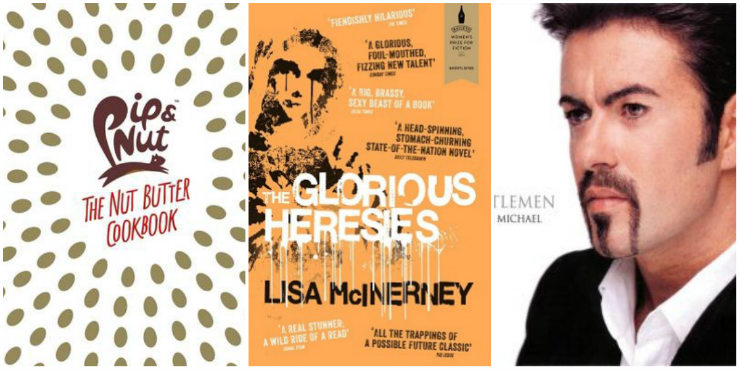 Did you know you can access eBooks, eAudiobooks, eMagazines and listen to music with your library card? Set up OverDrive, BorrowBox, Zinio and Freegal here. Information and content librarian Lisa Brennan has picked out this month’s newest and top titles to get you downloading.

A Night In with Grace Kelly, by Lucy Holliday

“The LOL conclusion to the series that started with A Night in With Audrey Hepburn. Perfect for fans of Sophie Kinsella and Lindsey Kelk.

“Fate has got it in for Libby Lomax. She realised, far too late, that her best friend Olly is the actual Love of Her Life. Now he’s in love with the so-nice-it-hurts Tash, and it looks like her happy ending is completely out of reach. Things start looking up when she, quite literally, runs into the completely gorgeous Joel. Libby discovers that there is more to Joel than his six-pack, not least, the incredible fact that he honestly believes he has found his fairy tale princess in her. And if this wasn’t enough, an unwanted guest shows up on Libby’s enchanted sofa; Grace Kelly, wearing her iconic wedding dress and convinced that Libby is figment of her imagination.

“But one thing that Grace doesn’t believe in is fairy tales. Grace believes that if you really want something, then you’ve got to make it happen yourself; words which give Libby hope that happy endings aren’t just for fairy tale princesses…”

The Death of Kings, by Rennie Airth

“I have reason to believe that the jade pendant accompanying this letter is the same one that disappeared from Miss Portia Blake’s body in August 1938 … Since the piece could not have been stolen by the man who was hanged for Miss Blake’s murder, the question arises: who else could have taken it? And why?”

“1949. An unsigned letter arrives on the desk of Chief Inspector Derry of the Canterbury police. Enclosed is a jade pendant, identical to the one that went missing from the body of Portia Blake, an actress murdered a decade previously. The case had been shut quickly at the time - the accused vagrant gave a written confession and was sentenced to the gallows - but in the police’s haste to close the inquiry, the necklace was never recovered. Until now.

“Inspector Madden is asked to investigate the letter’s worrying claims by his old friend, and former Chief Inspector, Angus Sinclair, who fears the wrong man may have been hanged on his watch. But with a world war separating Madden from the murder, the truth will not come easy…”

“A story of struggle and hardship and one girl’s battle for survival from the best-selling author of If You Were the Only Girl and Another Man’s Child.

“Angela McCluskey comes to Birmingham from Ireland with her family as a young girl to escape the terrible poverty in her homeland. But the dream of a better life is dashed as bad fortune dogs the family. When Angela marries her childhood sweetheart, she has hopes of a brighter future, which are dashed when her husband is called up to fight in the Great War. Tragedy strikes and Angela is left to rear her frail daughter on her own, though the worst is yet to come when Angela suffers another terrible misfortune.

“Pregnant and destitute and already with one mouth to feed that she can ill afford, there is nowhere left to turn. What destiny awaits Angela and her unborn child? Caught between the devil and the deep blue sea, will Angela forever be punished for the choices that she makes?”

A Family Secret, by Josephine Cox

“Sometimes you just need the courage to tell the truth…

“Although she’s surrounded by a loving family, Marie feels lost: living with a lie can be very lonely. Marie has been carrying a secret for years, one that could ruin the lives of those she loves most, and the guilt she feels weighs heavily. Her granddaughter, Cathy, is a most cheerful young woman, and in the first flush of love. The secret Marie is about to tell her will not only change her future but rewrite her past. Cathy now has a dangerous choice to make that could change her life forever. As far as everyone can see Cathy’s future sister-in-law, Beth, has a happy life and a good marriage, but she’s heartbreakingly sad. One day, perhaps she’ll be brave enough to speak out and run away…

“Secrets at the heart of a family can last a lifetime… but it’s the love of a family that can set you free.”

“The 5:2, or fast diet, works by restricting calorie intake for two non-consecutive days a week, while allowing you to eat normally on the other five days. In The Fast Days Cookbook, food writer Laura Herring shows you how you can avoid entering the hunger zone on your fast days with recipes that give you maximum satisfaction for the fewest calories.

“The focus is on planning what to eat and when, cleverly combining ingredients that provide huge flavours – fast days should not be a punishment! If you enjoy food, then you should also enjoy it on your fasting days, not resign yourself to sad-looking salads.”

How to Lose Weight Well, by Dr Xand van Tulleken

“Written by Dr Xand van Tulleken, who slimmed down from 19 stone, How to Lose Weight Well accompanies the hit Channel 4 show and champions a foolproof weightloss method. He presents a simple 4-step plan for a healthy diet, backed by science. No gimmicks, no expensive supplements, no hassle – just practical advice and 70 easy recipes for every day of the week.”

“Nut butter is the new superfood. You’re now as likely to see almond butter as peanut butter on supermarket shelves everywhere. It’s a fabulous, high-protein option for those looking to avoid both dairy and palm oil, as well as tasting fantastic. From almond to cashew and peanut, this trailblazing cookbook shows you how to use versatile nut butters in breakfasts, snacks, smoothies, savoury dishes, desserts and bakes, as well as make your own.”

“Thanks to his Dopamine Diet, Michelin-starred chef Tom Kerridge has shed eleven stone over the past three years. That’s the same as 70 bags of sugar. If you’re struggling with your weight and need to shift unhealthy pounds, this new approach makes it easy, and is guaranteed to make you feel happier in the process.

“Most people find it hard to keep to a long-term diet, but this one is different. The recipes feature ingredients that trigger the release of the ‘happy hormone’ dopamine in your brain, so it’s a diet that will make you feel good! Tom’s ‘dopamine heroes’ include dairy products such as double cream and yoghurt, good-quality meats including beef, chicken and turkey, and even chocolate. By ditching alcohol and starchy carbs in favour of plenty of protein, fresh fruit and veg, you will be eating meals that will help you shed the weight, whilst offering a satisfying intensity of flavour.

“Treats in store for Dopamine Dieters include spinach, bacon and mint soup; roasted onion salad with fried halloumi; shepherd’s pie with creamy cauliflower topping; soy glazed cod with chilli, garlic and ginger; braised beef with horseradish; Chinese pork hot pot; and chocolate mousse with sesame almond biscuits. These are recipes that don’t feel like diet food, and can be shared with friends and family. It worked for Tom and it can work for you. Give it a go! And lose weight the Dopamine Diet way.”

Lawyer for the Cat, by Lee Robinson

“Whilst juggling the demands of the court room, an aging mother and a confusing romantic life, will Sally make the right decision for Beatrice? And, as she delves deeper into the case, will she uncover the truth behind the family’s secrets?”

The Glorious Heresies, by Lisa McInerney

“We all do stupid things when we’re kids. Ryan Cusack’s grown up faster than most – being the oldest of six with a dead mum and an alcoholic dad will do that for you. And nobody says Ryan’s stupid. Not even behind his back. It’s the people around him who are the problem. The gangland boss using his dad as a ‘cleaner’. The neighbour who says she’s trying to help but maybe wants something more than that. The prostitute searching for the man she never knew she’d miss until he disappeared without trace one night…

“The only one on Ryan’s side is his girlfriend Karine. If he blows that, he’s all alone. But the truth is, you don’t know your own strength till you need it.”

This month, we’re highlighting our range of sports and fitness themed magazines.

The January issue features food trends for 2017, the best new sports gear and interviews with ‘this year’s hottest influencers.

The February 2 issue features new product comparisons, information on how to assess your strength, and a ‘training makeover’.

The latest issue includes a feature on players to watch in the Champions League this year.

Discover six dos and don’ts of sugar, tips that will help you regain your motivation to run, and ways you can move more during the day.

Find out about the 5 best bunkerless courses in the UK, the best new gear for 2017, and discover how you can perfect your putting.

Learn how to ‘Eat Yourself Lean in 2017’, improve your heart’s strength by 18%, and how to get fit in the great outdoors instead of the gym.

Number 3 in the Official Albums Chart at the time of writing. Features Shout Out to My Ex and Touch.

Number 9 in the Official Albums Chart at the time of writing. Features Careless Whisper, Faith and Outside.

James Arthur - Back From The Edge

Number 11 in the Official Albums Chart at the time of writing. Features Say You Won’t Let Go.

Number 28 in the Official Albums Chart at the time of writing. Features Club Tropicana, Wake Me Up Before You Go-Go and I’m Your Man.

Number 42 in the Official Albums Chart at the time of writing, having entered at Number 1. Features You Don’t Know Love and Years & Years.