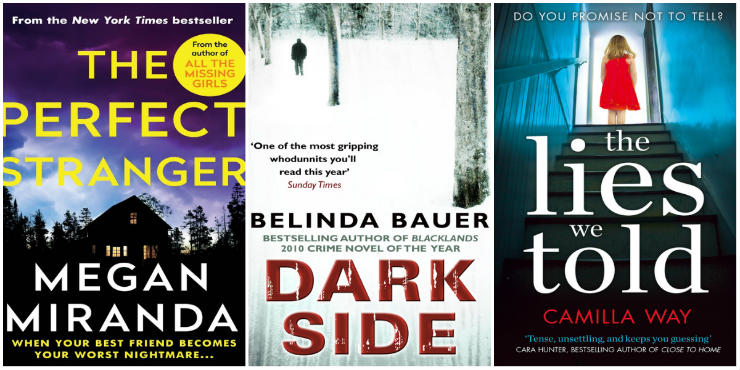 The Way of All Flesh, by Ambrose Parry

“In Edinburgh’s Old Town young women are being found dead, all having suffered similarly gruesome ends. Across the city in the New Town, medical student Will Raven is about to start his apprenticeship with the brilliant and renowned Dr Simpson. Simpson’s patients range from the richest to the poorest of this divided city. His house is like no other, full of visiting luminaries and daring experiments in the new medical frontier of anaesthesia.

“It is here that Raven meets housemaid Sarah Fisher, who recognises trouble when she sees it and takes an immediate dislike to him. She has all of Raven’s intelligence but none of his privileges, in particular his medical education. With each having their own motive to look deeper into these deaths, Raven and Sarah find themselves propelled headlong into the darkest shadows of Edinburgh’s underworld, where they will have to overcome their differences if they are to make it out alive.”

Mine, by Susi Fox

“This is not your baby.

“You wake up alone after an emergency caesarean, dying to see your child. But when you are shown the infant, you just know … This baby is not yours.

“No one believes you. They say you’re delusional, confused, dangerous. But you’re a doctor … Do you trust yourself?

“Because you know only one thing - You must find your baby.”

“It is freezing mid-winter on Exmoor, and in a close-knit community where no stranger goes unnoticed, a local woman has been found murdered in her bed. This is local policeman Jonas Holly’s first murder investigation. But he is distracted by anonymous letters, accusing him of failing to do his job.

“Taunted by the killer and sidelined by his abrasive senior detective, Jonas has no choice but to strike out alone on a terrifying hunt … but who is hunting who?”

The Perfect Stranger, by Megan Miranda

“Having reached a dead end in Boston, failed journalist Leah Stevens needs a change. When she runs into an old friend, Emmy Grey, who is moving to rural Pennsylvania, Leah decides to join her. But their fresh start is quickly threatened when a woman with an eerie resemblance to Leah is assaulted by the lake, and Emmy disappears days later.

“Determined to find Emmy, Leah helps Detective Kyle Donovan to investigate her friend’s life for clues. But with no friends, family or digital footprint, the police begin to suspect that there is no Emmy Grey. Forced to question her version of reality and to save herself, Leah must uncover the truth - no matter how dark or terrible it may be…”

The Lies We Told, by Camilla Way

“Beth has always known there was something strange about her daughter, Hannah. The lack of emotion, the disturbing behaviour, the apparent delight in hurting others… sometimes Beth is scared of her, and what she could be capable of.

“Luke comes from the perfect family, with the perfect parents. But one day, he disappears without trace, and his girlfriend Clara is left desperate to discover what has happened to him.

“As Clara digs into the past, she realizes that no family is truly perfect, and uncovers a link between Luke’s long-lost sister and a strange girl named Hannah. Now Luke’s life is in danger because of the lies once told and the secrets once kept. Can she find him before it’s too late?”

“Detective Lindsay Boxer is on the case of a series of shootings of the homeless in San Francisco, where the killer is methodical yet unpredictable. An encounter with a confidential informant leads her to disturbing conclusions – something has gone very wrong inside the police department itself.

“The hunt for the killer lures Lindsay out of her jurisdiction, and Lindsay’s friends in the Women’s Murder Club are concerned that she’s taking the crimes too much to heart. But with lives on the line, Lindsay can’t stop herself from following the case into ever more terrifying terrain – even though the killer could cost her everything…”

Race to Death, by Leigh Russell

“When a man plummets to his death from a balcony at York races, his wife and brother become suspects in a murder enquiry.

“Meanwhile Richard is being stalked by a killer issuing death threats. Richard is reluctant to go to the police, for fear his own dark secret will be exposed.”

The Devil’s Own Luck, by David Donachie

“During the Napoleonic Wars, Harry and James Ludlow are aboard the Magnanime, a gunship under the command of Oliver Carter. Oliver and Harry are old rivals and when James is found near the dead body of the First Lieutenant, Carter assumes James is the murderer. Harry has to prove otherwise.”

“Elizabeth Cage is a child when she discovers that there are things in this world that only she can see. But she doesn’t want to see them and she definitely doesn’t want them to see her.

“What is a curse to Elizabeth is a gift to others – a very valuable gift they want to control. When her husband dies, Elizabeth’s world descends into a nightmare. But as she tries to piece her life back together, she discovers that not everything is as it seems. Alone in a strange and frightening world, she’s a vulnerable target to forces beyond her control. And she knows that she can’t trust anyone…”

The Night Stalker, by Clare Donoghue, read by Imogen Church

“Dead Woman’s Ditch. The site of a grisly 200-year-old murder – and a recent hit and run. When a young woman’s body is found at the macabre landmark in Somerset’s Quantock Hills, DI Mike Lockyer and Sergeant Jane Bennett are called in to investigate.

“They find a community gripped by fear and superstition. The locals won’t venture out at night, believing there’s a man stalking the hills; a phantom cloaked in folklore and legend, keeping the sinister legacy of Dead Woman’s Ditch alive.

“Confronted by a hostile CID team and a murder victim with close ties to their own squad, Lockyer and Bennett will have to accept what they can’t see before they can find what’s really there…”

The Innocent Wife, by Amy Lloyd, read by Christina Cole

“Twenty years ago, Dennis Danson was arrested and imprisoned for the brutal murder of a young girl in Florida’s Red River County. Now he’s the subject of a true-crime documentary that’s whipping up a frenzy online to uncover the truth and free him from his wrongful conviction.

“Thousands of miles away in England, Samantha is obsessed with Dennis’s case. She exchanges letters with him, and is quickly won over by his apparent charm and kindness to her. Soon she has left her old life behind to marry him and campaign for his release.

“But when the campaign is successful and Dennis is freed, Sam begins to discover new details that suggest he may not be quite so innocent after all.

“But how do you confront your husband when you don’t want to know the truth?”

The Killer, by Susan Wilkins, read by Lucy Price-Lewis

“Kaz Phelps is on the run – from the past, from the legacy of her criminal family, from the haunting memories of her murdered lover. The police want her back in jail and her enemies want her dead. While standing by the grave of her gangster brother, Kaz realises she only has one option. To fight back.

“Nicci Armstrong was one of the Met’s best detectives until personal tragedy forced her to quit. Now she’s responsible for the security of the super-rich who use her city as a playground. She is one of the few people Kaz might trust. But Nicci’s biggest mistake yet is falling in love with a man she knows is only using her.

“Meanwhile, as envious rivals back home plot against him, a Russian billionaire searches for a special gift to keep the Kremlin onside, a disgraced politician dreams of revenge and a Turkish drug baron plots to purge his dishonour with blood.”

“Being a cop runs in Billy Harney’s family. The son of Chicago’s Chief of Detectives whose twin sister, Patty, also followed in their father’s footsteps, there’s nothing Billy won’t give up for the job, including his life.

“Left for dead alongside his tempestuous former partner and a hard-charging assistant district attorney out for blood, Billy miraculously survives. But he remembers nothing about the events leading up to the shootout.

“Charged with double murder and desperate to clear his name, Billy retraces his steps to get to the bottom of what happened. When he discovers the existence of a little black book that everyone who’s anyone in Chicago will stop at nothing to get their hands on, Billy suspects it contains the truth that will either set him free… or confirm his worst fears.”

Don’t Wake Up, by Liz Lawler, read by Zara Ramm

“Alex Taylor wakes up tied to an operating table. The man who stands over her isn’t a doctor. The choice he forces her to make is utterly unspeakable.

“But when Alex re-awakens, she’s unharmed – and no one believes her horrifying story. Ostracised by her colleagues, her family and her partner, she begins to wonder if she really is losing her mind.

“And then she meets the next victim.”

A Stranger in the House, by Shari Lapena, read by Tavia Gilbert

“Why would you run scared from a happy home?

“You’re waiting for your beloved husband to get home from work. You’re making dinner, looking forward to hearing about his day.

“That’s the last thing you remember.

“You wake up in hospital, with no idea how you got there. They tell you that you were in an accident; you lost control of your car whilst driving in a dangerous part of town.

“The police suspect you were up to no good. But your husband refuses to believe it. Your best friend isn’t so sure. And even you don’t know what to believe…”

The Quiet Child, by John Burnley, read by MacLeod Andrews

“It’s the summer of 1954, and the residents of Cottonwood, California, are dying. At the centre of it all is six-year-old Danny McCray, a strange and silent child the townspeople regard with fear and superstition, and who appears to bring illness and ruin to those around him. Even his own mother is plagued by a disease that is slowly consuming her.

“Sheriff Jim Kent, increasingly aware of the whispers and rumors surrounding the boy, has watched the people of his town suffer — and he worries someone might take drastic action to protect their loved ones. Then a stranger arrives, and Danny and his ten-year-old brother, Sean, go missing. In the search that follows, everyone is a suspect, and the consequences of finding the two brothers may be worse than not finding them at all.”