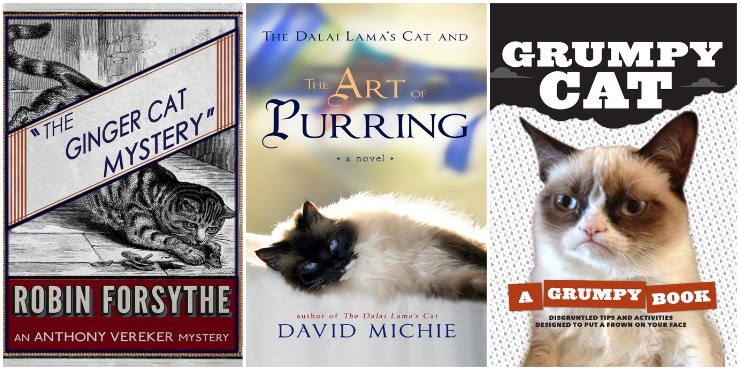 Calling all kitten kissers and cat cuddlers! We’ve put together a list of some of our best cat-themed titles from our OverDrive and BorrowBox services.

The No 2 Feline Detective Agency, by Mandy Morton

“Hettie Bagshot has bitten off more than any cat could chew. As soon as she launches her No. 2 Feline Detective Agency, she’s bucketed into a case: Furcross, home for slightly older cats, has a nasty spate of bodysnatching, and three of the residents have been stolen from their graves. Hettie and her sidekick, Tilly, set out to reveal the terrible truth.

“Is Nurse Mogadon involved in a deadly game? Has the haberdashery department of Malkin & Sprinkle become a mortuary? And what flavour will Betty Butter’s pie of the week be?”

“Everyone was astonished when the beautiful Josephine Rivron rejected the young, popular and handsome Frank Cornell, and married his elderly, wealthy father John instead. When John fell ill and died shortly after marrying, there were suspicions that the cause wasn’t pneumonia, but a nasty case of poisoning. Then Frank Cornell too was dead - shot through the head, the weapon vanished. This time no one had any doubt it was murder.

“Amateur sleuth Algernon Vereker is drawn to the case by a recurring bout of his “old detective fever”. He packs his Colt automatic and joins Inspector Heather down at Marston Manor to investigate.

“The Ginger Cat Mystery (1935) is a classic country house whodunit stuffed with suspects, clues, red herrings and dark deeds. Not to mention the eponymous feline, whose tell-tale fur might just help to hang a murderer.”

“Internet sensation Grumpy Cat’s epic feline frown has inspired legions of devoted fans. Celebrating the grouch in everyone, the Grumpy Cat book teaches the fine art of grumpiness and includes enough bad attitude to cast a dark cloud over the whole world.

The Dalai Lama’s Cat, The Art of Purring and The Power of Meow, by David Michie

This series, narrated by His Holiness’s Cat (HHC), provides a brilliant and accessible introduction and insight into the teachings of Buddhism.

‘Escape to the enchanting and exotic world of the Dalai Lama’s monastery in the Himalayas, and take a peek inside the mind of a delightfully imperfect creature on the path to enlightenment. By accompanying HHC on her journey, you will learn new ways to relate to your own mind: slowing down, finding peace, and abiding in the boundless radiance and benevolence that is your own true nature. ‘

How to Live Like Your Cat, by Stéphane Garnier, read by Roland Glasser

“Do cats worry about their pension? Nope. Do cats take on work they don’t want to do? As if! Do cats rush around hectically when they’d rather be licking their paws and looking out of the window? Please.

“Cats are free. They are calm, observant, wise, elegant, charismatic and proud. In fact, cats have found nothing less than the secret of how we should all live, whatever species we are! And in this book, Stéphane Garnier will show you what he’s learned over fifteen years of closely observing his cat, and teach you all the ways in which you too can apply the secrets of cats to your own life – at work, at home and with your friends.

“Unplug your laptop. Throw away your alarm clock. It’s time to live like your cat!”

Lawyer for the Cat, by Lee Robinson, read by Liza Ross

“Whilst juggling the demands of the court room, an ageing mother and a confusing romantic life, will Sally make the right decision for Beatrice? And, as she delves deeper into the case, will she uncover the truth behind the family’s secrets?”

“When James Bowen found an injured, ginger street cat curled up in the hallway of his sheltered accommodation, he had no idea just how much his life was about to change. James was living hand to mouth on the streets of London and the last thing he needed was a pet.

“Yet James couldn’t resist helping the strikingly intelligent tom cat, whom he quickly christened Bob. He slowly nursed Bob back to health and then sent the cat on his way, imagining he would never see him again. But Bob had other ideas.

“Soon the two were inseparable and their diverse, comic and occasionally dangerous adventures would transform both their lives, slowly healing the scars of each other’s troubled pasts.”