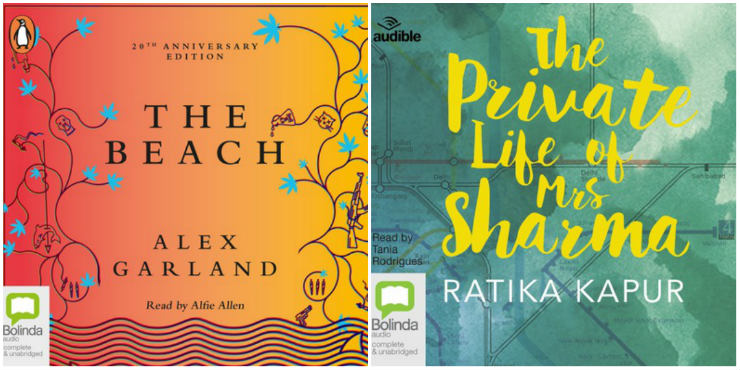 Whether you’re soaking up the sun on the beach or in the garden, relax with one of our favourite stories on BorrowBox.

“On the day of his daughter’s wedding, Agamemnon orders her sacrifice.

“His daughter is led to her death, and Agamemnon leads his army into battle, where he is rewarded with glorious victory.

“Three years later, he returns home and his murderous action has set the entire family – mother, brother, sister – on a path of intimate violence, as they enter a world of hushed commands and soundless journeys through the palace’s dungeons and bedchambers. As his wife seeks his death, his daughter, Electra, is the silent observer to the family’s game of innocence while his son, Orestes, is sent into bewildering, frightening exile where survival is far from certain. Out of their desolating loss, Electra and Orestes must find a way to right these wrongs of the past even if it means committing themselves to a terrible, barbarous act.”

“Timothy Gandy has kept his lifetime’s ambition secret for 40 years.

“Now, suddenly (if tragically) released from the hen-pecked tedium of his ordinary existence, he is unexpectedly free to realise his dreams.

“He will embark on a Grand Tour of Europe, following in the footsteps of the aristocrats of the 18th century.

“He anticipates high art, culture and pleasant weather. He never expected to encounter new friendships – and possibly even love – along the way.

“Trudy has betrayed her husband, John. She’s still in the marital home – a dilapidated, priceless London townhouse – but John’s not there. Instead, she’s with his brother, the profoundly banal Claude, and the two of them have a plan. But there is a witness to their plot: the inquisitive, nine-month-old resident of Trudy’s womb.”

The Private Life of Mrs Sharma, by Ratika Kapur, read by Tania Rodrigues

“Renuka Sharma is a dutiful wife, mother, and daughter-in-law holding the fort in a modest rental in Delhi while her husband tries to rack up savings in Dubai.

“Working as a receptionist and committed to finding a place for her family in the new Indian dream of air-conditioned malls and high-paid jobs at multinationals, life is going as planned until the day she strikes up a conversation with an uncommonly self-possessed stranger at a Metro station. Because while Mrs. Sharma may espouse traditional values, India is changing all around her, and it wouldn’t be the end of the world if she came out of her shell a little, would it?”

The Lake House, by Kate Morton, read by Caroline Lee

“June 1933, and the Edevane family’s country house, Loeanneth, is polished and gleaming, ready for the much-anticipated Midsummer Eve party. Alice Edevane, sixteen years old and a budding writer, is especially excited. Not only has she worked out the perfect twist for her novel, she’s also fallen helplessly in love with someone she shouldn’t. But by the time midnight strikes and fireworks light up the night skies, the Edevane family will have suffered a loss so great that they leave Loeanneth forever.”

“Seventy years later, after a particularly troubling case, Sadie Sparrow is sent on an enforced break from her job with the Metropolitan Police. She retreats to her beloved grandfather’s cottage in Cornwall but soon finds herself at a loose end. Until one day, Sadie stumbles upon an abandoned house surrounded by overgrown gardens and dense woods, and learns the story of a baby boy who disappeared without a trace.”

“Meanwhile, in the attic writing room of her elegant Hampstead home, the formidable Alice Edevane, now an old lady, leads a life as neatly plotted as the bestselling detective novels she writes. Until a young police detective starts asking questions about her family’s past, seeking to resurrect the complex tangle of secrets Alice has spent her life trying to escape…”

My Name is Lucy Barton, by Elizabeth Strout, read by Kimberly Farr

“Lucy Barton is recovering slowly from what should have been a simple operation. Her mother, to whom she hasn’t spoken for many years, comes to see her. Gentle gossip about people from Lucy’s childhood in Amgash, Illinois, seems to reconnect them, but just below the surface lie the tension and longing that have informed every aspect of Lucy’s life: her escape from her troubled family, her desire to become a writer, her marriage, her love for her two daughters.

“Knitting this powerful narrative together is the brilliant storytelling voice of Lucy herself: keenly observant, deeply human, and truly unforgettable.”

The Beach, by Alex Garland, read by Alfie Allen

“Richard lands in East Asia in search of an earthly utopia. In Thailand, he is given a map promising an unknown island, a secluded beach – and a new way of life. What Richard finds when he gets there is breathtaking: more extraordinary, more frightening than his wildest dreams.

“But how long can paradise survive here on Earth? And what lengths will Richard go to in order to save it?”

“Some memories are too powerful to live only in the past.

“During a ferocious storm, a red-haired stranger appears in the garden of a small farming cottage. Eliza and her parents take him in. But very soon, it’s clear he has no intention of leaving.

“A century later, Mary and Graham have experienced every parent’s worst nightmare. Now, escaping their old London life, the memories and the headlines, they have found an idyllic new home in rural Suffolk. A cottage, a beautiful garden. The perfect place to forget. To move on.

“But in The Stopped Heart, the past never dies.”