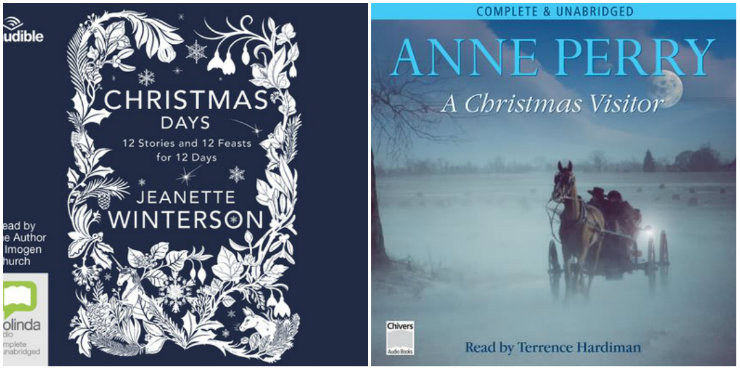 “For years Jeanette Winterson has loved writing a new story at Christmastime, and here she brings together 12 of her brilliantly imaginative, funny and bold tales. For the 12 Days of Christmas – a time of celebration, sharing and giving – she offers these 12 plus one: a personal story of her own Christmas memories.

“These tales give the listener a portal into the spirit of the season, where time slows down and magic starts to happen. From trees with mysterious powers to a tinsel baby that talks, philosophical fairies to flying dogs, a haunted house and a disappearing train, Winterson’s innovative stories encompass the childlike and spooky wonder of Christmas.”

The Spy Who Came in from the Cold, by John le Carré, read by Michael Jayston

“In the shadow of the newly erected Berlin Wall, Alec Leamas watches as his last agent is shot dead by East German sentries. For Leamas, the head of Berlin Station, the Cold War is over. As he faces the prospect of retirement or worse – a desk job – Control offers him a unique opportunity for revenge.

“Assuming the guise of an embittered and dissolute ex-agent, Leamas is set up to trap Mundt, the deputy director of the East German Intelligence Service – with himself as the bait. In the background is George Smiley, ready to make the game play out just as Control wants.”

“In the bitter dawn of a winter’s morning, a young man and a woman escape from a priory. In fear of their lives, they are forced to flee across a land ravaged by conflict.

“For this is the War of the Roses, one of the most savage and bloody civil wars in history, where brother confronts brother, king faces king, and Thomas and Katherine must fight – just to stay alive…”

Christmas at Woolworths, by Elaine Everest, read by Annie Aldrington

“Best friends Sarah, Maisie and Freda are brought together by their jobs at Woolworths. With their loved ones away on the front line, their bonds of friendship strengthen each day.

“Betty Billington is the manager at Woolworths, and a rock for the girls, having given up on love … Until a mysterious stranger turns up one day. Could he reignite a spark in Betty?

“As the year draws to a close, and Christmas approaches, the girls must rely on each other to navigate the dark days that lie ahead. With so much change, can their friendship survive the war?”

“Joel is growing up. He is getting interested in girls. Just look at his New Year’s resolutions: 1 – to see a naked lady; 2 – to toughen himself up so that he can live to be a hundred; and 3 – to see the sea.

“They all look pretty impossible for a motherless boy in Northern Sweden. Especially as his sailor dad is keen to drown his sadness in drink, and all the local matrons are narrowly watching the pair of them.

“And then he saves old Simon from a frozen death in the woods, and Joel becomes a local hero.”

A Christmas Visitor, by Anne Perry, read by Terrence Hardiman

“Henry Rathbone arrives to spend Christmas at the Dreghorn family manor house near Ullswater. He is greeted by the news that the master of the house, Judah Dreghorn, has died, presumed accidentally drowned. Not only this, but Judah’s good name is being slandered by someone claiming to be the rightful owner of the manor and estate. Rathbone and Judah’s brothers must investigate.”