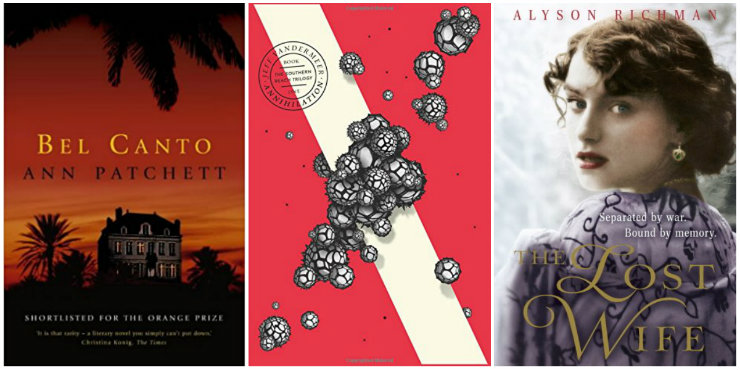 Ready Player One, by Ernest Cline

If you’re a fan of immersive computer games, you will love this book. It’s really highly regarded, so the cast and director Steven Spielberg really have their work cut out to impress its readers.

“2044. We’re out of oil. We’ve wrecked the climate. Famine, poverty, and disease are widespread. Like most of humanity, Wade Watts escapes this depressing reality by spending his waking hours jacked into the OASIS, a sprawling virtual utopia where you can be anything you want to be. And like most of humanity, Wade is obsessed by the ultimate lottery ticket that lies concealed within this alternate reality: OASIS founder James Halliday, who dies with no heir, has promised that control of the OASIS - and his massive fortune - will go to the person who can solve the riddles he has left scattered throughout his creation.

“For years, millions have struggled fruitlessly to attain this prize. And then Wade stumbles onto the key to the first puzzle. Suddenly, he finds himself pitted against thousands of competitors in a desperate race to claim the ultimate prize.”

Terrorists crash a birthday party opera gala in South America and a hostage situation develops. A group of strangers, including a world-renowned opera singer (played by Julianne Moore) are forced to live together for weeks. The fighters make demands, a poor Red Cross volunteer acts as intermediary with officers outside, and meanwhile, everyone inside the house tries to get along, despite numerous language barriers.

This would make an interesting book group choice as there is plenty to discuss.

The Girl in the Spider’s Web, by David Lagercrantz, translated by George Goulding

Biographer David Lagercrantz picks up where the late Stieg Larsson left off with the hugely popular Millennium Series. Claire Foy is playing Lisbeth Salander this time around:

“Lisbeth Salander and Mikael Blomkvist have not been in touch for some time.

“Then Blomkvist is contacted by renowned Swedish scientist Professor Balder. Warned that his life is in danger, but more concerned for his son’s well-being, Balder wants Millennium to publish his story - and it is a terrifying one.

“More interesting to Blomkvist than Balder’s world-leading advances in Artificial Intelligence is his connection with a certain female superhacker.

“It seems that Salander, like Balder, is a target of ruthless cyber gangsters - and a violent criminal conspiracy that will very soon bring terror to the snowbound streets of Stockholm, to the Millennium team, and to Blomkvist and Salander themselves.”

The Lost Wife, by Alyson Richman

“During the last moments of calm in pre-war Prague, Lenka, a young art student, falls in love with Josef. They marry - but soon, like so many others, they are torn apart by the currents of war. Now, decades later, an unexpected encounter in New York brings Lenka and Josef back together.”

Expect an epic story and coverage of the full horrors of war in both book and film. British Star Wars actor Daisy Ridley is rumoured to star.

“It’s January 1946, and writer Juliet Ashton sits at her desk, vainly seeking a subject for her next book. Out of the blue, she receives a letter from one Dawsey Adams of Guernsey - by chance, he’s acquired a secondhand book that once belonged to Juliet - and, spurred on by their mutual love of Charles Lamb, they begin a correspondence.”

The film version has the snappier title of Guernsey. Lily James stars alongside a distinguished collection of British acting talents.

“For 30 years, Area X has remained mysterious, remote, and concealed by the government as an environmental disaster zone - even though it is to all appearances pristine wilderness. Over the same period, a secret agency known as the Southern Reach has monitored it and sent in expeditions to try to discover the truth. Some have suffered terrible consequences. Others have reported nothing out of the ordinary.

“Now, as Area X seems to be changing and perhaps expanding, the next expedition will attempt to succeed where all others have failed. What is happening in Area X, and what is the true nature of the invisible border that surrounds it?”

When Stephen King says a book is creepy, it probably is! Natalie Portman and Oscar Isaac star in the film.

Dakota Johnson and Jamie Dornan reprise their roles as Ana and Christian for the third and final time. In case you haven’t read the book:

“When Ana Steele first encountered the driven, damaged Christian Grey, it sparked an affair that changed both their lives irrevocably. Ana must learn to share Grey’s opulent lifestyle without sacrificing her own integrity or independence; and Grey must overcome his compulsion to control and lay to rest the horrors that still haunt him.”

I Heard You Paint Houses, by Charles Brandt

“‘I heard you paint houses’ are the first words Jimmy Hoffa ever spoke to Frank ‘the Irishman’ Sheeran. To paint a house is to kill a man. The paint is the blood that splatters on the wall and floors. In the course of nearly five years of recorded interviews Frank Sheeran confessed to Charles Brandt that he handled more than twenty-five hits for the Mob, and for his friend Hoffa.

“Sheeran learned to kill in the US Army, where he saw an astonishing 411 days of active combat during World War 2. After returning home he became a hustler and a hit man, working for legenday crime boss Russell Bufalino. Eventually Sheeran would rise to a position of such prominence that he was named as one of only two non-Italians on a list of the twenty-six most wanted Mob figures.

“When Bufalino ordered Sheeran to kill Hoffa, the Irishman did the deed, knowing that if he refused, he would have been killed himself.”

All the Bright Places, by Jennifer Niven

“Theodore Finch is fascinated by death, and he constantly thinks of ways he might kill himself. But each time, something good, no matter how small, stops him. Violet Markey lives for the future, counting the days until graduation, when she can escape her Indiana town and her aching grief in the wake of her sister’s recent death.

“When Finch and Violet meet on the ledge of the bell tower at school, it’s unclear who saves whom. And when they pair up on a project to discover the ‘natural wonders’ of their state, both Finch and Violet make more important discoveries.”

Although this book is aimed at young adults, its themes are applicable to all ages and it would make an excellent book club read. Elle Fanning is lined up to play Violet.

A Wrinkle in Time, by Madeleine L’Engle

“When Charles Wallace Murry goes searching through a ‘wrinkle in time’ for his lost father, he finds himself on an evil planet where all life is enslaved by a huge pulsating brain known as ‘It’. How Charles, his sister Meg and friend Calvin find and free his father makes this a very special and exciting mixture of fantasy and science fiction, which all the way through is dominated by the funny and mysterious trio of guardian angels known as Mrs Whatsit, Mrs Who and Mrs Which.”

The adaptation of this classic children’s sci-fi adventure from 1962 is bound to be a grand production, starring big names including Reese Witherspoon, Chris Pine and Oprah Winfrey.