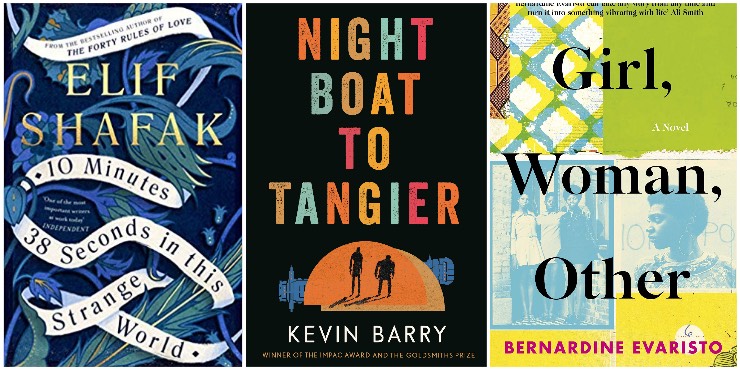 The plot of The Testaments, which picks up 15 years after the end of The Handmaid’s Tale, is a closely-guarded secret ahead of its publication in September!

“It’s late one night at the Spanish port of Algeciras and two fading Irish gangsters are waiting on the boat from Tangier. A lover has been lost, a daughter has gone missing, their world has come asunder - can it be put together again?

“Night Boat to Tangier is a novel drenched in sex and death and narcotics, in sudden violence and old magic, but it is obsessed, above all, with the mysteries of love.”

My Sister, the Serial Killer, by Oyinkan Braithwaite

“When Korede’s dinner is interrupted one night by a distress call from her sister, Ayoola, she knows what’s expected of her: bleach, rubber gloves, nerves of steel and a strong stomach. This’ll be the third boyfriend Ayoola’s dispatched in, quote, self-defence and the third mess that her lethal little sibling has left Korede to clear away. She should probably go to the police for the good of the menfolk of Nigeria, but she loves her sister and, as they say, family always comes first.

“Until, that is, Ayoola starts dating the fit doctor where Korede works as a nurse. Korede’s long been in love with him, and isn’t prepared to see him wind up with a knife in his back: but to save one would mean sacrificing the other.”

“Latticing one cherry pie after another, an Ohio housewife tries to bridge the gaps between reality and the torrent of meaningless info that is the United States of America. She worries about her children, her dead parents, African elephants, the bedroom rituals of ‘happy couples’, Weapons of Mass Destruction, and how to hatch an abandoned wood pigeon egg. Is there some trick to surviving survivalists? School shootings? Medical debts? Franks ‘n’ beans?

“A scorching indictment of America’s barbarity, past and present, and a lament for the way we are sleepwalking into environmental disaster, Ducks, Newburyport is a heresy, a wonder - and a revolution in the novel.”

Girl, Woman, Other, by Bernardine Evaristo

“Girl, Woman, Other follows the lives and struggles of twelve very different characters. Mostly women, black and British, they tell the stories of their families, friends and lovers, across the country and through the years.”

The Wall, by John Lanchester

The Man Who Saw Everything, by Deborah Levy

“In 1989 Saul Adler (a narcissistic, young historian) is hit by a car on the Abbey Road. He is apparently fine; he gets up and goes to see his art student girlfriend, Jennifer Moreau. They have sex then break up, but not before she has photographed Saul crossing the same Abbey Road.

“Saul leaves to study in communist East Berlin, two months before the Wall comes down. There he will encounter - significantly - both his assigned translator and his translator’s sister, who swears she has seen a jaguar prowling the city. He will fall in love and brood upon his difficult, authoritarian father. And he will befriend a hippy, Rainer, who may or may not be a Stasi agent, but will certainly return to haunt him in middle age.

“In 2016, Saul Adler is hit by a car on the Abbey Road. He is rushed to hospital, where he spends the following days slipping in and out of consciousness, and in and out of memories of the past.”

“Suppose you and Pa were gone, and we were lost. What would happen then?

“A family in New York packs the car and sets out on a road trip. A mother, a father, a boy and a girl, they head south west, to the Apacheria, the regions of the US which used to be Mexico. They drive for hours through desert and mountains. They stop at diners when they’re hungry and sleep in motels when it gets dark. The little girl tells surreal knock knock jokes and makes them all laugh. The little boy educates them all and corrects them when they’re wrong. The mother and the father are barely speaking to each other.”

An Orchestra of Minorities, by Chigozie Obioma

“Umuahia, Nigeria. Chinonso, a young poultry farmer, sees a woman attempting to jump to her death from a highway bridge. Horrified by her recklessness, Chinonso joins her on the roadside and hurls two of his most prized chickens into the water below to demonstrate the severity of the fall. The woman, Ndali, is moved by his sacrifice.

“Bonded by this strange night on the bridge, Chinonso and Ndali fall in love. But Ndali is from a wealthy family, and when they officially object to the union because he is uneducated, Chinonso sells most of his possessions to attend a small college in Cyprus. Once in Cyprus, he discovers that all is not what it seems. Furious at a world which continues to relegate him to the sidelines, Chinonso gets further and further away from his dream, from Ndali and the place he called home.”

“Quichotte, an ageing travelling salesman obsessed with TV, is on a quest for love. Unfortunately, his daily diet of reality TV, sitcoms, films, soaps, comedies and dramas has distorted his ability to separate fantasy from reality. He wishes an imaginary son, Sancho, into existence, while obsessively writing love letters to a celebrity he knows only through his screen. Together the two innocents set off across America in Quichotte’s trusty Chevy Cruze to find her and convince her of his love.

“Quichotte’s story is told by Brother, a mediocre spy novelist in the midst of a midlife crisis. As the stories of Brother and Quichotte intertwine, we are taken on a wild, picaresque journey through a country on the edge of moral and spiritual collapse.”

10 Minutes 38 Seconds in this Strange World, by Elif Shafak

“Our brains stay active for ten minutes after our heart stops beating. For Leila, each minute brings with it a new memory: growing up with her father and his wives in a grand old house in a quiet Turkish town; watching the women gossip and wax their legs while the men went to mosque; sneaking cigarettes and Western magazines on her way home from school; running away to Istanbul to escape an unwelcome marriage; falling in love with a student who seeks shelter from a riot in the brothel where she works.

“Most importantly, each memory reminds Leila of the five friends she met along the way - friends who are now desperately trying to find her.”

“In Brexit Britain, a young transgender doctor called Ry is falling in love - against their better judgement - with Victor Stein, a celebrated professor leading the public debate around AI. Meanwhile, Ron Lord, just divorced and living with Mum again, is set to make his fortune launching a new generation of sex dolls for lonely men everywhere. Across the Atlantic, in Phoenix, Arizona, a cryogenics facility houses dozens of bodies of men and women who are medically and legally dead but waiting to return to life.

“But the scene is set in 1816, when nineteen-year-old Mary Shelley writes a story about creating a non-biological life-form.”