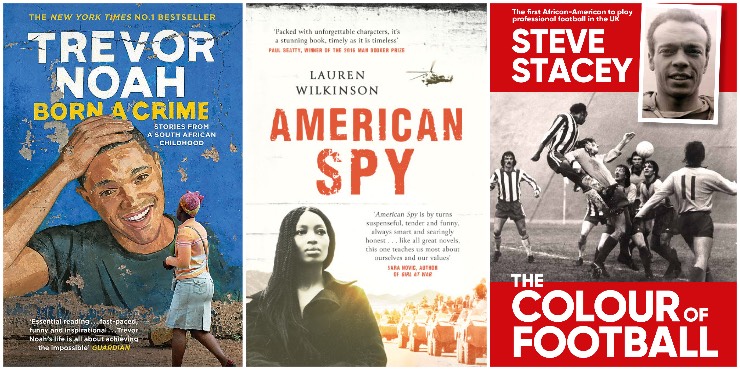 October is Black History Month. We’ve picked out a selection of books and DVDs to help you mark the occasion.

“Terrible, unspeakable things happened to Sethe at Sweet Home, the farm where she lived as a slave for so many years until she escaped to Ohio. Her new life is full of hope but 18 years later she is still not free. Sethe’s new home is not only haunted by the memories of her past but also by the ghost of her baby, who died nameless.”

Notes from a Black Woman’s Diary, by Kathleen Collins

Stunning collection of fiction, diary entries, screenplays and scripts by the brilliant African-American artist and filmmaker.

Wonderful Adventures of Mrs Seacole in Many Lands, by Mary Seacole

“This text is an engaging self portrait. The author emerges as am independent and respected maternal figure, the model of female achievement in Victorian culture. She also gives the reader an insight into the life of a Jamaican woman in the 19th century.”

Half of a Yellow Sun, by Chimamanda Ngozi Adichie

Between the World and Me, by Ta-Nehisi Coates

A reflection on the culture and discrimination around being black in the USA, addressed as a letter to the author’s teenage son.

Go Ahead in the Rain: notes to A Tribe Called Quest, by Hanif Andurraqib

This book is nominally about groundbreaking rap group A Tribe Called Quest but is also about growing up black in the 90s.

Hidden Figures: the untold story of the African American women who helped win the space race, by Margot Lee Shetterley

Three brilliant African-American women at NASA – Katherine Johnson, Dorothy Vaughan and Mary Jackson serve as the brains behind one of the greatest operations in history: the launch of astronaut John Glenn into orbit. True story which was also made into a feature film.

The Hate U Five, by Angie Thomas

“Starr Carter’s world is shattered when she is the only witness to the fatal shooting of her unarmed best friend, Khalil, by a police officer. Now what Starr says could destroy her community. It could also get her killed.”

A popular choice. The former First Lady’s autobiography chronicles her journey to becoming one of the most influential people in America.

“In a life filled with meaning and accomplishment, Michelle Obama has emerged as one of the most iconic and compelling women of our era. As First Lady of the United States of America - the first African-American to serve in that role - she helped create the most welcoming and inclusive White House in history, while also establishing herself as a powerful advocate for women and girls in the U.S. and around the world, dramatically changing the ways that families pursue healthier and more active lives, and standing with her husband as he led America through some of its most harrowing moments. Along the way, she showed us a few dance moves, crushed Carpool Karaoke, and raised two down-to-earth daughters under an unforgiving media glare.”

The TV host tells the story of the discrimination he faced as a mixed-race child growing up in South Africa.

“Trevor Noah is the host of The Daily Show with Trevor Noah, where he gleefully provides America with its nightly dose of serrated satire. He is a light-footed but cutting observer of the relentless absurdities of politics, nationalism and race - and in particular the craziness of his own young life, which he’s lived at the intersections of culture and history.

“In his first book, Noah tells his coming of age story with his larger-than-life mother during the last gasps of apartheid-era South Africa and the turbulent years that followed. Noah was born illegal - the son of a white, Dutch father and a black Xhosa mother, who had to pretend to be his nanny or his father’s servant in the brief moments when the family came together.”

The Booker Prize winner’s first book in a new series has been referred to as the “African Game of Thrones”.

“Tracker is known far and wide for his skills as a hunter: ‘He has a nose,’ people say - as well as the eye of a wolf. Engaged to find a mysterious boy who has disappeared three years before, Tracker breaks his own rule of always working alone when he finds himself part of a rag-tag group that comes together to search for the boy.

“Full of striking characters with secrets of their own, including a shape-shifting man-animal known as Leopard, a witch and the giant-sized Ogo, this unlikely band follow the lost boy’s scent from one ancient city to another; into dense forests and across deep rivers, set upon by creatures intent on destroying them.

“As he struggles to survive, Tracker starts to wonder: Who, really, is this boy? Why has he been missing for so long? Why do so many people want to keep Tracker from finding him? And who is telling the truth, and who is lying?”

An FBI agent, Marie Mitchell is sent to Burkina Faso to monitor the revolutionary president Thomas Sankara for the CIA. When she gets there, she realises that the lies that her bosses have told her are being used to subvert a government that is providing healthcare to the poor and equal rights to women.

“It’s 1986, the heart of the Cold War, and Marie Mitchell is an intelligence officer with the FBI. She’s brilliant and talented, but she’s also a black woman working in an all-white boys’ club, and her career has stalled with routine paperwork - until she’s recruited to a shadowy task force aimed at undermining Thomas Sankara, the charismatic, revolutionary president of Burkina Faso, whose Communist ideology has made him a target for American intervention.

“In the year that follows, Marie will observe Thomas, seduce him, and ultimately, have a hand in the coup that will bring him down. But doing so will change everything she believes about what it means to be a spy, a lover, and a good American.”

The Colour of Football, by Steve Stacey

Steve Stacey was the first African-American to play professional football in the UK. He played for Ipswich Town in 1969.

“Dido (Gugu Mbatha-Raw) is the daughter of English Naval captain Sir John Lindsay (Matthew Goode) and an African woman. Sent to England to be raised on the Kenwood House Estate by her uncle, Lord Mansfield (Tom Wilkinson), Dido quickly realises that her ethnicity is problematic in upper class society. Though her cousin Elizabeth (Sarah Gadon) accepts her friendship immediately and the girls become inseparable, Lord Mansfield and Lady Mansfield (Emily Watson) are tormented by the question of Dido’s social status.

“As Dido points out, it leaves her in a somewhat lonely position to be deemed ‘too good’ to dine with the servants and ‘not good enough’ to entertain visitors, but when she meets dashing young lawyer John Davinier (Sam Reid) she discovers an Englishman who accepts her as she is and offers his hand in marriage. Can the couple’s love overcome the conventions and prejudices of the time?”

American superhero film based on the Marvel Comics character of the same name. Black Panther was the first black superhero to headline a film since the Blade trilogy.

“Returning home to his technologically advanced homeland of Wakanda, King T’Challa (Chadwick Boseman) settles into his new role of leading his nation. However, T’Challa soon finds his rule challenged as a number of rival factions look to take control for themselves. With the threat of war edging ever closer and the future of Wakanda hanging in the balance, T’Challa, in his guise as Black Panther, must team up with CIA agent Everett K. Ross (Martin Freeman) in an attempt to restore order and save his people.”