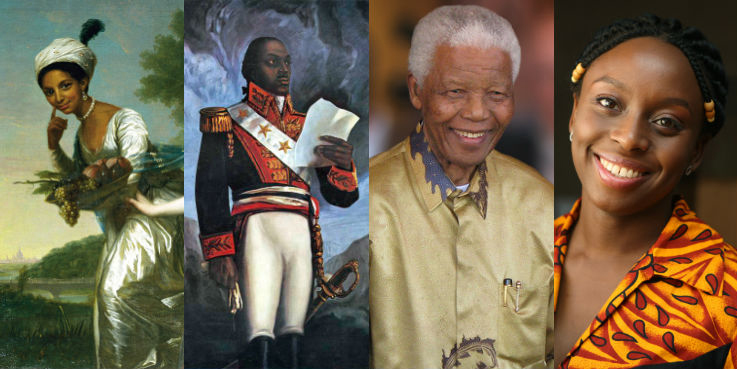 Belle, a film by Amma Asante

Based on the true story of Dido Elizabeth Belle, a mixed-race woman brought up in English aristocracy and her family’s involvement in legally ending slavery in the UK.

The interesting narrative and other writings by Olaudah Equiano

Equiano details his 18th century life in the Igbo province of Africa, followed by capture and later freedom.

The Haitian revolution by Toussaint L’Ouverture

The general led a successful slave revolt to free the people of Haiti.

The Black Count: glory, revolution, betrayal and the real Count of Monte Cristo by Tom Reiss

Fascinating biography of the high ranking French general during the Napoleonic era and father of author Alexandre Dumas.

Wonderful adventures of Mrs Seacole in many lands by Mary Seacole

The nursing pioneer during the Crimean War accounts her life and struggles in the 19th century.

Roots: The Next Generation

An impressive follow-up to the excellent series Roots, covering black American life from the Reconstruction era, through two world wars and up to the 1960s.

There was a country: a personal history of Biafra by Chinua Achebe

An autobiographical account of Achebe’s experiences during the Nigerian Civil War, from the author of Things Fall Apart.

Half of a yellow sun by Chimamanda Ngozi Adichie

Biopic film based on Mandela’s life, starring Idris Elba as the anti-apartheid activist.

Between the world and me by Ta-Nehisi Coates

A reflection on the culture and discrimination around being black in the USA, addressed as a letter to the author’s teenage son.