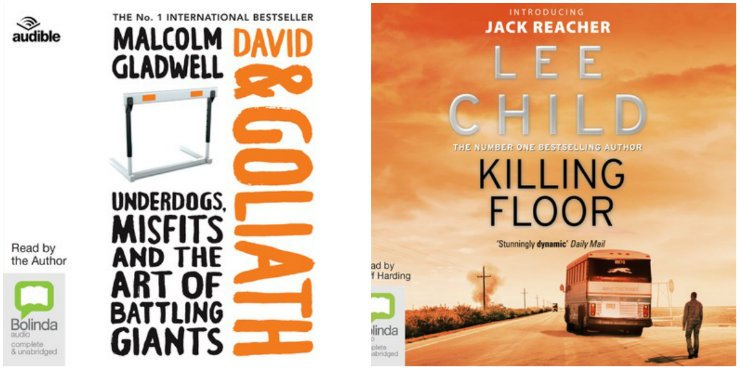 Have you been meaning to read an award-winning book but not had the time? Why not listen to it instead?

“In northern Iceland, 1829, Agnes Magnúsdóttir is condemned to death for her part in the brutal murder of two men.

“Agnes is sent to wait out the months leading up to her execution on the farm of district officer Jón Jónsson, his wife and their two daughters. Horrified to have a convicted murderess in their midst, the family avoid contact with Agnes – until one winter night, she begins her whispered confession to them, and they realise that all is not as they had assumed.

“Based on a true story, Burial Rites is an astonishing and moving novel about the truths we claim to know and the ways in which we interpret what we’re told”.

Life After Life, by Kate Atkinson, read by Fenella Woolgar

“What if there were second chances? And third chances? In fact an infinite number of chances to live your life? Would you eventually be able to save the world from its own inevitable destiny? And would you even want to?

“Life After Life follows Ursula Todd as she lives through the turbulent events of the last century again and again. With wit and compassion, Kate Atkinson finds warmth even in life’s bleakest moments, and shows an extraordinary ability to evoke the past. Here she is at her most profound and inventive, in a novel that celebrates the best and worst of ourselves.”

David & Goliath: underdogs, misfits, and the art of battling giants, written and read by Malcolm Gladwell

“Why do underdogs succeed so much more than we expect? How do the weak outsmart the strong? In David and Goliath, Malcolm Gladwell takes us on a scintillating and surprising journey through the hidden dynamics that shape the balance of power between the small and the mighty. From the conflicts in Northern Ireland and Vietnam, through the tactics of civil rights leaders and the problem of privilege, Gladwell demonstrates how we misunderstand the true meaning of advantage and disadvantage.”

Does My Head Look Big in This?, by Randa Abdel-Fattah, read by Rebecca Macauley

“Welcome to my world. I’m Amal Abdel-Hakim, a seventeen year-old Australian-Palestinian-Muslim still trying to come to grips with my various identity hyphens. It’s hard enough being cool as a teenager when being one issue behind the latest Cosmo is enough to disqualify you from the in-group. Try wearing a veil on your head and practising the bum’s-up position at lunchtime and you know you’re in for a tough time at school.

“Luckily my friends support me, although they’ve got a few troubles of their own. Simone, blonde, gorgeous and overweight - she’s got serious image issues, and Leila’s really intelligent but her parents are more interested in her getting a marriage certificate than her high school certificate! And I thought I had problems.”

“Since her mother’s death, fifteen-year-old Jem has kept a secret. When her eyes meet someone else’s, a number pops into her head - the date on which they will die.

“Knowing that nothing lasts forever, Jem avoids relationships, but when she meets a boy called Spider, and they plan a day out together, her life takes a new twist and turn. Waiting for the London Eye, she sees everyone in the queue has the same number - something terrible is going to happen…”

“Grace Marks. Female fiend? Femme fatale? Or weak and unwilling victim? Around the true story of one of the most enigmatic and notorious women of the 1840s, Margaret Atwood has created an extraordinarily potent tale of sexuality, cruelty and mystery.

“Sixteen years have passed since teenaged Grace was locked up for the cold-blooded murder of her employer Thomas Kinnear and his lover, Nancy Montgomery. Saved from the gallows where her alleged accomplice was hanged, Grace claims to have no memory of the events which changed her life for ever.

“Dr Simon Jordan is an expert in the field of amnesia. His objective is to unlock the dormant part of Grace’s mind and discover the truth behind one of the most enigmatic and notorious women of all time.”

Winner of the Canadian Giller Prize 1996.

“Jack Reacher jumps off a bus and walks 14 miles down a country road into Margrave, Georgia. An arbitrary decision he’s about to regret.

“Reacher is the only stranger in town on the day they have had their first homicide in 30 years. The cops arrest Reacher and the police chief turns eyewitness to place him at the scene. As nasty secrets leak out, and the body count mounts, one thing is for sure.

“They picked the wrong guy to take the fall.”