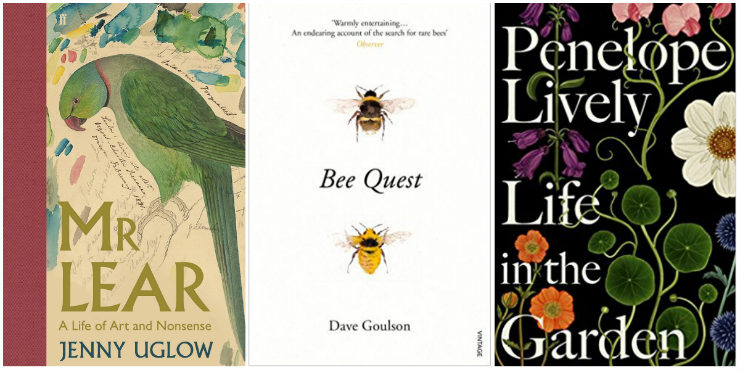 The 17th Aldeburgh Literary Festival runs from Thursday 1 to Sunday 4 March. One of the cultural highlights of the year, the participants’ books are always well worth a read.

You can find out more about this year’s programme on the Aldeburgh Literary Festival website.

Mr Lear: a life of art and nonsense, by Jenny Uglow

“Edward Lear’s poems follow and break the rules. They abide by the logic of syntax, the linking of rhyme and the dance of rhythm, and these ‘nonsenses’ are full of joy - yet set against darkness. Where do these human-like animals and birds and these odd adventures - some gentle, some violent, some musical, some wild - come from? His many drawings that accompany his verse are almost hyper-real, as if he wants to free the creatures from the page. They exist nowhere else in literature, springing only from Lear’s imagination.

“Lear lived all his life on the borders of rules and structures, of disciplines and desires. He vowed to ignore politics yet trembled with passionate sympathies. He depended on patrons and moved in establishment circles, yet he never belonged among them and mocked imperial attitudes.”

This is a beautifully produced book which captures a man of many contradictions.

Bee Quest: in search of rare bees, by Dave Goulson

“A hunt for the world’s most elusive bees leads Dave Goulson from Salisbury plain to the Sussex hedgerows, from Poland to Patagonia. Whether he is tracking great yellow bumblebees in the Hebrides or chasing orchid bees through the Ecuadorian jungle, Dave Goulson’s wit, humour and deep love of nature make him the ideal travelling companion.

“But perhaps Bee Quest is most fascinating when Dave Goulson explores closer to home, amongst the secret places hidden right under our noses: the abandoned industrial estates where great crested newts roam; or the rewilded estate at Knepp Castle, where, with the aid of some hairy, bluebell-eating Tamworth pigs, nightingale song has been heard for the first time in generations.”

This charming book will inspire you to think about the ways in which we are all responsible for the natural world.

Life in the Garden, by Penelope Lively

“Penelope Lively has always been a keen gardener. This book is partly a memoir of her own life in gardens: the large garden at home in Cairo where she spent most of her childhood, her grandmother’s garden in a sloping Somerset field, then two successive Oxfordshire gardens of her own, and the smaller urban garden in the North London home she lives in today.

“It is also a wise, engaging and far-ranging exploration of gardens in literature, from Paradise Lost to Alice in Wonderland, and of writers and their gardens, from Virginia Woolf to Philip Larkin.”

This is garden writing of an exceptionally high standard.

The Production of Money: how to break the power of bankers, by Ann Pettifor

“Money makes the world go round: but what is it really? And how is it produced? Above all, who controls its production, and in whose interests? Money is never a neutral medium of exchange. Nor are bankers simply go-betweens for savers and borrowers.

This is already very popular among our customers and was one of our Suffolk Loves picks.

“One rainy evening in November, a handsome young stranger fresh off the boat pitches up at a counting-house door in Golden Hill Street: this is Mr Smith, amiable, charming, yet strangely determined to keep suspicion simmering. For in his pocket, he has what seems to be an order for a thousand pounds, a huge amount, and he won’t explain why, or where he comes from, or what he can be planning to do in the colonies that requires so much money.

“Should the New York merchants trust him? Should they risk their credit and refuse to pay? Should they befriend him, seduce him, arrest him - maybe even kill him?”

Where We Are: the state of Britain now, by Roger Scruton

Writer and academic Sir Roger Scruton examines why Britain is the country it is, what unites us as a nation and why seismic political events such as Brexit have occurred.

Gainsborough: a portrait, by James Hamilton

“Thomas Gainsborough (1727-1788) lived as if electricity shot through his sinews and crackled at his finger ends. He was a gentle and empathetic family man, but had a volatility that could lead him to slash his paintings, and a loose libidinous way of speaking, writing and behaving that shocked many deeply. In this exhilarating new biography - the first in decades - James Hamilton reveals Gainsborough in his many contexts.”

The Natural Baker: a new way to bake using the best natural ingredients, by Henrietta Inman

More tempting recipes from the author of Clean Cakes.