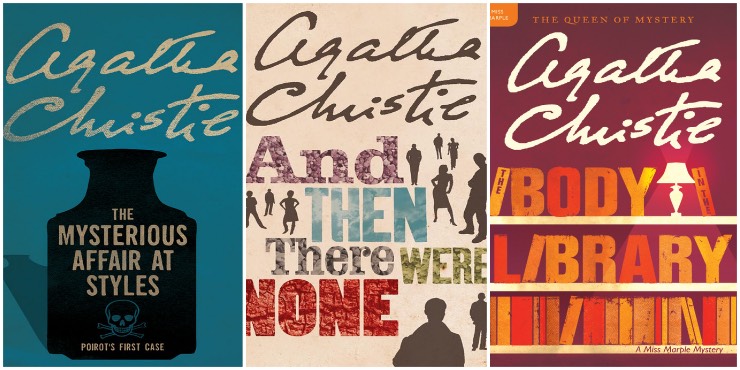 15 September marks 129 years since legendary crime writer Agatha Christie’s birth. Discover some of her titles or revisit some old favourites with our eBooks and eAudiobooks on OverDrive.

“Just as Amy Leatheran is about to return to England, she is hired by celebrated archaeologist Dr Leidner to work as a nurse/companion for his wife, who is subject to fits of nervous terrors. As they travel to an ancient site in the Iraqi desert, Amy finds herself in a situation stranger than she could ever have imagined, whilst Mrs Leidner proves to be a demanding yet fascinating woman. Gradually Mrs Leidner warms to Amy and, taking her into her confidence, she reveals the source of her terror.

“But as the oppressive tension in the air thickens, events come to a terrible climax and result in murder. With just one spot of blood as his only clue, Hercule Poirot must embark on a journey not just across the desert but into the darkest crevices of the human soul. There he hopes to unravel a mystery which taxes even his remarkable powers.”

Murder on the Orient Express

“An international cast of suspects, all passengers on the crowded train, are speeding through the snowy European landscape when a bizarre and terrible murder brings them to an abrupt halt. One of their glittering number lies dead in his cabin, stabbed a mysterious twelve times. There is no lack of clues for Poirot - but which clue is real and which is a clever plant? Poirot realises that this time he is dealing with a murderer of enormous cunning and that in a case fraught with fear and inconsistencies only one thing is certain - the murderer is still aboard the train waiting to strike again…”

“Elspeth McGillicuddy is down from Scotland for a holiday and boards the 4:50 train from Paddington station to visit her friend, Miss Marple. During the journey, another train pulls alongside, and through the window Mrs McGillicuddy witnesses a tall, dark man strangling a blonde woman. She reports what she has seen, yet no one takes any notice. There is no report of any murder, no dead woman found on any train, and the police have no record of any persons reported missing that match the description.

“Only Miss Marple believes her account, and realising that the body must have been thrown off the train, with the help of maps and train timetables she pinpoints the exact spot where the body must be. With the help of her young friend Lucy Eyelesbarrow, she goes about the tricky task of uncovering a murder - and a cunning murderer…”

“Recuperating from a flying accident, Jerry Burton needs to take a break somewhere peaceful. He and his sister Joanna rent a house in the little village of Lymstock, where they know no-one and hope to be able to relax. Their quiet life is shattered, however, by the arrival of an obscene anonymous letter accusing them of impropriety.

“Jerry refuses to take it seriously and throws it on the fire. But during a routine check-up with the local GP, Doctor Griffiths, he soon discovers that theirs is by no means the first unpleasant missive: a number of other village residents have been similarly harassed. Suspicion is rife, and matters are brought to a head by the suicide of one of the letters’ recipients.

“With the whole village in a state of shock, the vicar’s wife decides to invite down an old friend with considerable experience of the darker side of human nature. Can Miss Marple’s arrival in Lymstock cast light on events? And can she discover the culprit before more deaths occur?”

“A dying woman confesses a terrible secret to her priest along with a cryptic list of nine names. Before he is able to uncover anything more, the priest is struck dead in the fog and the police discover the list in his shoe.

“Our hero Mark Easterbrook, a historian, learns of a secretive organisation known as The Pale Horse and of their supernatural connections in the village of Much Deeping. The list of names seems to foretell the deaths of several people and Mark must piece together the clues and unearth the connections between them all.

“Who is behind the strange powers of The Pale Horse?”

“Agatha Christie is the acknowledged ‘Queen of Crime’, and these twelve short stories showcase her skilful plotting and talent for producing compelling mysteries. First broadcast in the early 2000s, the stories were adapted and brought up-to-date for a contemporary audience.

“Unconventional detective Parker Pyne features in two of the stories, all twelve of which are infused with Agatha Christie’s trademark tension and suspense. These tantalising tales of revenge, jealousy, love and death will thrill her many fans.”

Looking for some appropriate music to play while you read? Check out Music from Agatha Christie’s Poirot on Freegal.

The Mysterious Affair at Styles

“With impeccable timing Hercule Poirot, the renowned Belgian detective, makes his dramatic entrance on to the English crime stage.

“Recently, there had been some strange goings on at Styles St Mary. Evelyn, constant companion to old Mrs Inglethorp, had stormed out of the house muttering something about ‘a lot of sharks’. And with her, something indefinable had gone from the atmosphere. Her presence had spelt security; now the air seemed rife with suspicion and impending evil.

“A shattered coffee cup, a splash of candle grease, a bed of begonias… all Poirot requires to display his now legendary powers of detection.”

The Murder of Roger Ackroyd

“Roger Ackroyd was about to be married. He had a life of wealth and privilege. First he lost his fiancée – and then his life. The day after her tragic suicide he retires upstairs to read a mysterious letter, leaving his closest friends and family to eat dinner below. Just a few hours later he is found stabbed to death in a locked room with a weapon from his own collection. Was he killed for money? For love? Or for something altogether more sinister? The truth will out.But you won’t see it coming.”

The Body in the Library

“It’s seven in the morning. The Bantrys wake to find the body of a young woman in their library. She is wearing an evening dress and heavy makeup, which is now smeared across her cheeks. But who is she? How did she get there? And what is the connection with another dead girl, whose charred remains are later discovered in an abandoned quarry?

“The respectable Bantrys invite Miss Marple into their home to investigate. Amid rumors of scandal, she baits a clever trap to catch a ruthless killer.”

The Murder at the Vicarage

“Colonel Protheroe, local magistrate and overbearing land-owner is the most detested man in the village. Everyone—even in the vicar—wishes he were dead. And very soon he is—shot in the head in the vicar’s own study. Faced with a surfeit of suspects, only the inscrutable Miss Marple can unravel the tangled web of clues that will lead to the unmasking of the killer.”

And Then There Were None

“Ten people, each with something to hide and something to fear, are invited to a lonely mansion on Indian Island by a host who, surprisingly, fails to appear. On the island they are cut off from everything but each other and the inescapable shadows of their own past lives. One by one, the guests share the darkest secrets of their wicked pasts. And one by one, they die…”

Why Didn’t They Ask Evans?

“While playing an erratic round of golf, Bobby Jones slices his ball over the edge of a cliff. His ball is lost, but on the rocks below he finds the crumpled body of a dying man. With his final breath the man opens his eyes and says, ‘Why didn’t they ask Evans?’

“Haunted by these words, Bobby and his vivacious companion, Frankie, set out to solve a mystery that will bring them into mortal danger.”