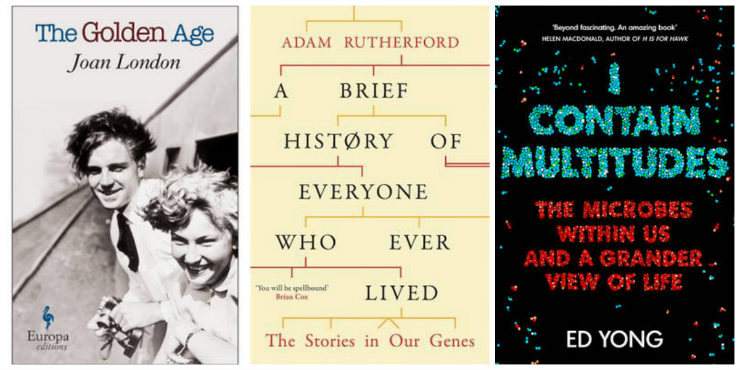 Are you interested in health or medicine, or simply looking for something new and different to read? The 2017 Wellcome Prize longlist features fiction and non-fiction titles across several genres. Lose yourself in a novel, learn something new - or even do both at once!

How to Survive a Plague: the story of how activists and scientists tamed AIDS, by David France

“The riveting, powerful and profoundly moving story of the AIDS epidemic and the grass-roots movement of activists, many of them facing their own life-or-death struggles, who grabbed the reins of scientific research to help develop the drugs that turned HIV from a mostly fatal infection to a manageable disease.”

“During the 20th century, humankind has managed to do the impossible: we have brought famine, plague and war under control. Today, more people die from obesity than from starvation; more people die from old age than from infectious diseases; and more people commit suicide than are killed in war. We are the only species in earth’s long history that has single-handedly changed the entire planet, and we no longer expect any higher being to shape our destinies for us.

“As the self-made gods of planet earth, which projects should we undertake, and how will we protect this fragile planet and humankind itself from our own destructive powers? Yuval Noah Harari examines the implications of our newly acquired divine capabilities, from our desperate pursuit of happiness to our dogged quest for immortality.”

“You are a young neurosurgeon. You have completed 11 years of training. You are devoted to your work and on the brink of a wonderful career. Then you are diagnosed with inoperable lung cancer.

“When Breath Becomes Air is an unforgettable reflection on the practice of medicine and the relationship between doctor and patient, from a gifted writer who became both.”

“A twenty-four-hour whirlwind of death and life.

“This is the heart of Simon Limbeau. This is the black box of his 20-year-old body, circulating 5 litres of blood each minute, compressing itself a hundred thousand times each day. No bigger than a fist, yet it is capable of pumping blood through 60 thousand miles of blood vessels. This heart has leaped, swelled, melted, sunk, and now, on this glacial winter night, it rests and recharges, readying itself for the day ahead. 5.50am. This is his heart. And here is its story.

The Golden Age, by Joan London

“The Golden Age is an immensely satisfying and generous story about displacement, recovery, resilience, and love.

“13 year old Frank Gold’s family has escaped from Hungary and the perils of World War II to the safety of Australia, but not long after their arrival Frank is diagnosed with polio. He is sent to a sprawling children’s hospital called The Golden Age, where he meets Elsa, the most beautiful girl he has ever seen, a girl who radiates pure light. Frank and Elsa fall in love, fueling one another’s rehabilitation, facing the perils of polio and adolescence hand in hand, and scandalising the prudish staff of The Golden Age.”

Cure: a journey into the science of mind over body, by Jo Marchant

“The field of mind-body medicine is plagued by wild claims that mislead patients and instil false hope. But that doesn’t mean the mind plays no role in health. By taking a scientific approach to understanding how our mental state influences our physiology, can we finally live in tune with our bodies in a way that is based on evidence, not fantasy?

“In her eye-opening book, Jo Marchant delves deep into the latest scientific research and asks these questions: are those who turn to alternative medicine deluded, or are they on to something? Do our thoughts, beliefs, and emotions influence our physical health? Can we train our brains to heal our bodies?”

The Tidal Zone, by Sarah Moss

“Adam is a stay-at-home dad who is also working on a history of the bombing and rebuilding of Coventry Cathedral. He is a good man and he is happy. But one day, he receives a call from his daughter’s school to inform him that, for no apparent reason, 15 year old Miriam has collapsed and stopped breathing.

“In that moment, he is plunged into a world of waiting, agonising, not knowing. The story of his life and the lives of his family are rewritten and re-told around this shocking central event, around a body that has inexplicably failed.”

The Gene: an intimate history, by Siddharta Mukherjee

“An epic, moving history of a scientific idea coming to life, by the author of The Emperor of All Maladies: a biography of cancer.

“But woven through this title, like a red line, is also an intimate history - the story of Mukherjee’s own family and its recurring pattern of mental illness, reminding us that genetics is vitally relevant to everyday lives. These concerns reverberate even more urgently today as we learn to read and write the human genome - unleashing the potential to change the fates and identities of our children.”

“Set in Victorian London and an Essex village in the 1890s, and enlivened by the debates on scientific and medical discovery which defined the era, The Essex Serpent has at its heart the story of two extraordinary people who fall for each other, but not in the usual way. They are Cora Seaborne and Will Ransome. Cora is a well-to-do London widow who moves to the Essex parish of Aldwinter, and Will is the local vicar. They meet as their village is engulfed by rumours that the mythical Essex Serpent, once said to roam the marshes claiming human lives, has returned.”

A Brief History of Everyone Who Ever Lived, by Adam Rutherford

“This is a story about you. It is the history of who you are and how you came to be. It is unique to you, as it is to each of the 100 billion modern humans who have ever drawn breath. But it is also our collective story, because in every one of our genomes we each carry the history of our species - births, deaths, disease, war, famine, migration and a lot of sex.

“Since scientists first read the human genome in 2001 it has been subject to all sorts of claims, counterclaims and myths. In fact, as Adam Rutherford explains, our genomes should be read not as instruction manuals, but as epic poems. DNA determines far less than we have been led to believe about us as individuals, but vastly more about us as a species.

“In this captivating journey through the expanding landscape of genetics, Adam Rutherford reveals what our genes now tell us about history, and what history tells us about our genes.”

“Inspired by the true story of his own great-aunt, Brad Watson explores the life of Miss Jane Chisolm, born in rural, early-twentieth-century Mississippi with a genital birth defect that would stand in the way of the central ‘uses’ for a woman in that time and place - namely, sex and marriage.

I Contain Multitudes: the microbes within us and a grander view of life, by Ed Yong

“Your body is teeming with tens of trillions of microbes. It’s an entire world, a colony full of life. In other words, you contain multitudes. These microscopic companions sculpt our organs, protect us from diseases, guide our behaviour, and bombard us with their genes. They also hold the key to understanding all life on Earth.

“Ed Yong opens our eyes and invites us to marvel at ourselves and other animals in a new light, less as individuals and more as thriving ecosystems. We learn the invisible and wondrous science behind the corals that construct mighty reefs and the squid that create their own light shows. We see how bacteria can alter our response to cancer-fighting drugs, tune our immune system, influence our evolution, and even modify our genetic make-up. And we meet the scientists who are manipulating these microscopic partners to our advantage.”