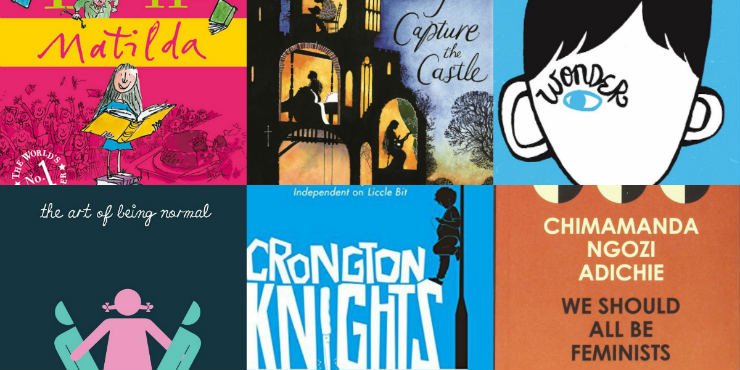 Reading Well have brought out a new list of uplifting titles for young people. The books were suggested by Reading Hack groups, young library volunteers and visitors to the Southbank’s 2016 YA Weekender, with the final list being decided by young people from Shoreditch Library.

The Art of Being Normal, by Lisa Williamson

“David is funny and quirky and has always felt different from other people - but he also has a huge secret that only his two best friends know. Ever since he can remember, he has felt like a girl trapped in the body of a boy.”

More Than This, by Patrick Ness

“A boy called Seth drowns, desperate and alone in his final moments, losing his life as the pounding sea claims him. But then he wakes. How is that possible? And where is this place? It looks like the suburban English town where he lived as a child, before an unthinkable tragedy happened and his family moved to America. But the neighbourhood around his old house is overgrown, covered in dust and completely abandoned. What’s going on?”

“Wonder is the funny, sweet and incredibly moving story of Auggie Pullman. Born with a terrible facial abnormality, this shy, bright ten-year-old has been home-schooled by his parents for his whole life, in an attempt to protect him from the stares and cruelty of the outside world.”

“When I decided to write a book about my life I thought I’d have to make loads of stuff up. I mean, who wants to read about someone like me? But as soon as I started writing, the weirdest thing happened. I found out I wasn’t who I thought I was. And I stopped being scared. Best of all, I discovered that when you finally decide to be brave it’s like waving a wand over your life - the most magical things can happen.”

The Rest Of Us Just Live Here, by Patrick Ness

“This bold, irreverent novel powerfully asks what if you weren’t the ‘chosen one’? The one who’s supposed to fight the zombies, or the soul-eating ghosts, or whatever this new thing is, with the blue lights and the death? What if you were like Mikey? Who just wants to graduate and go to prom and maybe finally work up the courage to ask Henna out before someone goes and blows up his high school. Again. Because sometimes there are problems bigger than this week’s end of the world and sometimes you just have to find the extraordinary in your ordinary life. Even if your best friend might just be the God of mountain lions!”

We Should All Be Feminists, by Chimamanda Adichie Ngozi

“What does ‘feminism’ mean today? That is the question at the heart of this personal, eloquently-argued essay by Chimamanda Ngozi Adichie, the award-winning author of Americanah and Half of a Yellow Sun.”

“Eleanor is the new girl in town, and with her chaotic family life, her mismatched clothes and unruly red hair, she couldn’t stick out more if she tried. Park is the boy at the back of the bus. Black T-shirts, headphones, head in a book - he thinks he’s made himself invisible. But not to Eleanor. Slowly, steadily, through late-night conversations and an ever-growing stack of mix tapes, Eleanor and Park fall for each other. They fall in love the way you do the first time, when you’re young, and you feel as if you have nothing and everything to lose.”

I Capture The Castle, by Dodie Smith

“This is the journal of Cassandra Mortmain. First, there is her eccentric father. Then there is her sister, Rose - and her stepmother, Topaz. Finally, there is Stephen, who is in love with Cassandra. Cassandra records her feelings on all of them.”

Aristotle and Dante Discover the Secrets of the Universe, by Benjamin Alire Sa’enz

“Aristotle is an angry teen with a brother in prison. Dante is a know-it-all who has an unusual way of looking at the world. When they meet at the swimming pool, they seem to have nothing in common. But as the two loners start spending time together, they discover that they share a special kind of friendship - the kind of friendship that changes lives and lasts a lifetime. And it is through their friendship that Ari and Dante will learn the most important truths about themselves - and about the kind of people they want to be.”

“Living on the South Crongton council estate has its worries - and life for McKay has been even tougher since his mum died. His dad has been working all hours to keep the bailiffs from their door. His brother is always out riding the streets at night, tempting trouble. And now, having strayed off his turf on a ‘heroic’ (if misguided) mission to help out a girl, McKay finds himself facing a friend’s crazy ex-boyfriend, some power-tripping hood-rats and a notoriously violent gangster with a vendetta which hits too close to home. Poor McKay. He never asked for trouble. But during one madcap night of adventure and danger, he will find out who his true friends are and what it means to stick with your family.”

Am I Normal Yet?, by Holly Bourne

“Evie, Amber and Lottie: three girls facing down tough issues with the combined powers of friendship, feminism and cheesy snacks. Both hilarious and heart-rending, this is Evie’s no-holds-barred story of struggling to live a ‘normal’ teen life in the grip of OCD.”

This One Summer, by Jillian and Mariko Tamaki

“Every summer, Rose goes with her mum and dad to a lake house in Awago Beach. It’s their getaway, their refuge. Rosie’s friend Windy is always there, too, like the little sister she never had. But this summer is different. Rose’s mum and dad won’t stop fighting, and when Rose and Windy seek a distraction from the drama, they find themselves with a whole new set of problems. It’s a summer of secrets and sorrow and growing up, and it’s a good thing Rose and Windy have each other.”

“Matilda’s parents have called her some terrible things. The truth is, she’s a genius and they’re the stupid ones. Find out how she gets the better of them and her spiteful headmistress, as well as discovering that she has a very special power.”

Milk and Honey, by Rupi Kaur

“This is a collection of poetry and prose about survival. About the experience of violence, abuse, love, loss, and femininity. The book is divided into four chapters, and each chapter serves a different purpose; deals with a different pain; heals a different heartache.”

Harry Potter and the Philosopher’s Stone

“Harry Potter lives in a cupboard under the stairs at his Aunt and Uncle’s house. He is bullied by them and his spoilt cousin, and lives a very unremarkable life. But then Harry is transported to a world of magic and excitement.”

Harry Potter and the Chamber of Secrets

“Harry Potter is in his second year at Hogwarts School of Witchcraft and Wizardry, and this year promises to be just as eventful as the last.”

Harry Potter and the Prisoner of Azkaban

“Harry Potter, along with his best friends, Ron and Hermione, is about to start his third year at Hogwarts School of Witchcraft and Wizardry. Harry can’t wait to get back to school after the summer holidays. But when Harry gets to Hogwarts, the atmosphere is tense. There’s an escaped mass murderer on the loose.”

Harry Potter and the Order of the Phoenix

“This novel by J.K. Rowling continues the further adventures of boy wizard Harry and his friends. Harry is due to start his fifth year at Hogwarts School, and what he is about to discover will turn his world upside down.”

Harry Potter and the Half-Blood Prince

“This novel takes up the story of Harry Potter’s sixth year at Hogwarts School of Witchcraft and Wizardry as Voldemort’s power and followers are increasing day by day, in the midst of the battle of good and evil.”

Harry Potter and the Deathly Hallows

“Harry has been burdened with a dark, dangerous and seemingly impossible task - that of locating and destroying Voldemort’s remaining Horcruxes. Harry must find the strength within himself to complete the tasks he has been given, leaving the warmth of The Burrow and following the inexorable path that has been laid out for him.”

“In a dangerous world, everyone needs protection. No one suspects that a teenager could protect someone - by Connor Reeves is no ordinary 14-year-old. He’s a bodyguard, a martial arts expert trained in surveillance, hostage survival and unarmed combat. When he’s summoned to protect the President’s daughter, his skills face the ultimate test. Alicia doesn’t want to be guarded. She just wants to have fun. With no clue that Connor is her bodyguard, she tries to escape the Secret Service and lead him astray. But unknown to her and Connor a terrorist sleeper cell has been activated. Its mission: to take the President’s daughter hostage.”

“Now Connor Reeves is on board the mega-yacht of a media mogul. His job: to protect the twin daughters of this wealthy man. His challenge: pirates storm the yacht and Connor is in very stormy waters…”

“Teenage martial arts expert Connor Reeves is tasked with protecting a foreign ambassador’s family on safari. Considered the perfect assignment, the holiday turns to hell when their convoy is ambushed by gunmen. Fleeing through the bush, Connor and his assigned family become the prey in a shoot-to-kill hunt across the African plains. As they fight for their survival, Connor realizes the gunmen are the least of their problems. For no amount of bodyguard training can prepare him for the wilds of Africa and one prowling hungry leopard.”

“Ash Wild is the most successful teen rockstar in history. Millions of fans adore him, but one fanatic wants him dead. Surf champion and top bodyguard recruit Charley Hunter is assigned to protect the superstar on his sell-out US tour. But Ash isn’t pleased to discover his new bodyguard is a girl! Faced with a growing number of death threats, several suspicious accidents and an unruly rockstar, Charley has her work cut out keeping Ash alive. How will she spot a killer in a crowd of 50,000 screaming fans?”