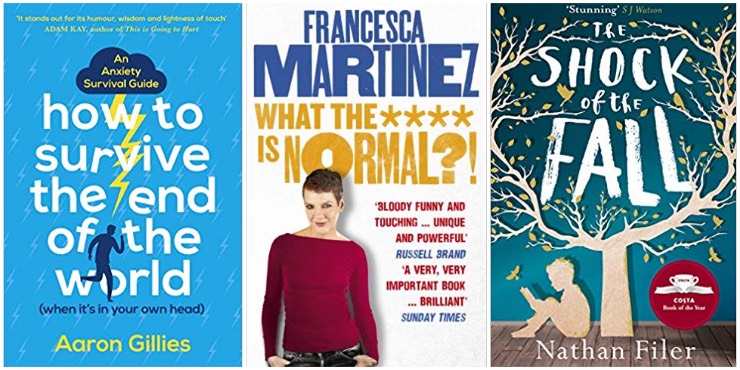 Mental Health Awareness Week runs from 13 - 19 May 2019. We’ve picked out some top fiction and non-fiction books to mark the occasion.

A Mindfulness Guide for the Frazzled, by Ruby Wax

“500 years ago no-one died of stress: we have invented this concept and now we let it rule us. Rest has become a dirty word, and our idea of satisfaction is answering the last email. We’re sleepwalking through our own lives. Ruby Wax shows us how to wake up from this stupor with a scientific solution to modern problems: mindfulness.

“Outrageously witty, smart and accessible, Ruby Wax shows ordinary people how and why to change for good.”

Mind Over Mood: change how you feel by changing the way you think, by Dennis Greenberger & Christine A. Padesky

The Shock of the Fall, by Nathan Filer

“The Shock of the Fall is an extraordinary portrait of one man’s journey through the spinning vortex that is mental illness. It is a brave and groundbreaking novel from one of the most exciting new voices in fiction.”

“Aged 24, Matt Haig’s world caved in. He could see no way to go on living. This is the true story of how he came through crisis, triumphed over an illness that almost destroyed him and learned to live again.

“A moving, funny and joyous exploration of how to live better, love better and feel more alive, Reasons to Stay Alive is more than a memoir. It is a book about making the most of your time on earth.”

Mentors: how to help and be helped, by Russell Brand

“Living and working a conscious programme has helped Russell Brand reframe his thinking in all areas of his life. Across the twelve chapters of this book, he looks at twelve themes that inform the process of recovery and, using that framework, discusses the lessons he has learned along his fifteen-year recovery path so far.”

The Bipolar Disorder Survival Guide: what you and your family need to know, by David Jay Miklowitz

“This comprehensive guide offers straight talk that can help people with bipolar disorder take charge of their illness and reclaim their lives. It is filled with practical self-assessment and self-management strategies from a compassionate professional.”

The Stranger on the Bridge: my journey from despair to hope, by Jonny Benjamin & Britt Pflüger

“In 2008, 20 year-old Jonny Benjamin stood on Waterloo Bridge, about to jump. A stranger saw his distress and stopped to talk with him - a decision that saved Jonny’s life.

“Fast forward to 2014 and Jonny, together with Rethink Mental Illness, launch a campaign with a short video clip so that Jonny could finally thank that stranger who put him on the path to recovery. More than 319 million people around the world followed the search. ITV’s breakfast shows picked up the story until the stranger, whose name is Neil Laybourn, was found and - in an emotional and touching moment - the pair reunited and have remained firm friends ever since.

“The Stranger on the Bridge is a memoir of the journey Jonny made both personally, and publicly to not only find the person who saved his life, but also to explore how he got to the bridge in the first place and how he continues to manage his diagnosis of schizoaffective disorder.”

“Henry Fraser was 17 years old when a tragic accident severed his spinal cord. Paralysed from the shoulders down, he has conquered unimaginable difficulty to embrace life and a new way of living. Through challenging adversity, he has found the opportunity to grow and inspire others.

Cheer Up Love: adventures in depression with the crab of hate, by Susan Calman

“Susan Calman has depression and she’s not alone in that. Despite being one of the funniest women in the UK (OK, the world) she has had her own black dog, the Crab of Hate, whispering in her ear since she can remember. And her answer? To talk about it.

“A woman who measures the length of her depression by box sets (Cracker good, West Wing bad) and who has made therapy more of a hobby than a medical requirement, Susan has written the book on what’s it’s like to be gloomy and enjoy it. Certain that the world needs people with a more cynical outlook on life, the book is a celebration of what she, and if statistics are to be believed, one in four of us, go through daily.”

A Beginner’s Guide to Losing Your Mind, by Emily Reynolds

“Emily Reynolds is mad. After years of trying - and failing - to cope with her symptoms, she was finally diagnosed as bipolar in her early twenties.

“Since then, Emily has been on a mission to find the best way to live with her illness, and now she wants to share that knowledge with you. Living with mental illness is isolating, infuriating and painful - but also very boring and, sometimes, kind of gross. This book is a companion to make the journey feel a little less lonely.”

Mad Girl: a happy life with a mixed-up mind, by Bryony Gordon

“On the surface it seems that Bryony Gordon has the perfect life. One of the UK’s most successful journalists, she is married to a man she loves with a two-year-old daughter she adores. Yet inside Bryony’s head things are never as straightforward as they seem. Is it possible that she’s murdered someone and can’t remember? Why did her hair fall out when she was a teenager? Is she capable of hurting her daughter? Has she mysteriously contracted an STD? Why is she always so fat? For while Bryony does have a life many would envy, she is also engaged in a daily battle with mental illness.

“Fighting with OCD, bulimia and depression, like millions of others in this country, sometimes she finds it a struggle just to get out of bed. Here, in Mad Girl, she tackles all of these subjects with her trademark humour, warmth and eye watering honesty.”

How to Survive the End of the World (when it’s in your own head): an anxiety survival guide, by Aaron Gillis

“There are plenty of books out there on how to survive a zombie apocalypse, all-out nuclear war, or Armageddon. But what happens when it feels like the world is ending every single time you wake up? That’s what having anxiety is like - and How to Survive the End of the World is here to help. Or at least make you feel like you’re not so alone.

“From helping readers identify the enemy, to safeguarding the vulnerable areas of their lives, Aaron Gillies will examine the impact of anxiety, and give readers some tools to fight back - whether with medication, therapy, CBT, coping techniques, or simply with a dark sense of humour.”

What the **** is Normal?!, by Francesca Martinez

“What do you do when you’re labelled abnormal in a world obsessed with normality? If you grow up in a world where wrinkles are practically illegal, cellulite is cause for a mental breakdown and women over a size ten are encouraged to shoot themselves (immediately), what the ** do you do if you’re, gasp, disabled?

“When Francesca was two years old, she was diagnosed with cerebral palsy. Her parents were told by a consultant that she would never lead a normal life. For many girls, this would have meant hiding away and accepting some things were beyond their reach. Not this girl.

“This book is personal, funny and insightful, and explores just how bloody hard it is to learn to like yourself - wobbly or not - in this world.”

“Meet Tim. For nearly a decade he kept his depression secret. It made him feel so weak and shameful and he thought it would destroy his whole life if anyone found out. When he finally opened up, he realised he wasn’t alone, and that mental illness was affecting many men around the globe - and he knew that wasn’t ok.

“A brutally honest, wickedly warming and heart-breaking tale about what it really takes to be a ‘real man’, Boys Don’t Cry is written by one who decided that he wanted to change the world by no longer being silent. This is Tim’s story, but it could be yours too.”

The Happiness Trap: based on ACT - a revolutionary mindfulness-based programme for overcoming stress, anxiety and depression, by Russ Harris

“Dr Russ Harris reveals how millions of people are unwittingly caught in ‘The Happiness Trap’, where the more they strive for happiness the more they suffer in the long term. He then provides an effective means to escape through a groundbreaking new approach based on mindfulness skills.”

Mindfulness: a practical guide to finding peace in a frantic world, by Mark Williams & Danny Penman

“Mindfulness reveals the secrets of lifelong happiness and details a unique programme developed by Oxford University psychologist Professor Mark Williams with colleagues around the world.”