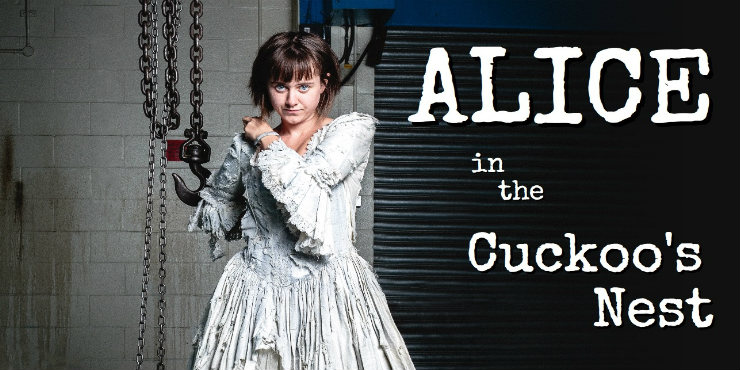 Librarian Theatre are bringing their new production, Alice in the Cuckoo’s Nest, to five Suffolk Libraries this December. We asked co-artistic director Kelly Eva May about the mental health themes in this experimental adaptation of Alice in Wonderland, set in a modern day mental institution.

1. Alice in Wonderland is already a very surreal story. Do you think that made it easier or more difficult to adapt it to a modern day mental health institutional setting?

That’s a rather tricky question to start with! I suppose the style of Lewis Carroll’s writing had both pros and cons for our adaptation - it has a wealth of bizarre characters, conversations and scenarios which translate very easily into the confused, jumbled world of a character experiencing psychosis, but to root our story in something more ‘real’ and relevant required a lot of imagination.

One problem we kept coming up against when stealing from Alice in Wonderland was the fairly episodic style, where Alice quite passively experiences one scene after another, then wakes up and carries on with her day. We were keen for our Alice to be more active in her journey: to be striving for something, and to make a discovery at the end.

2. We’ve read that Alice has psychosis. What other mental health problems are portrayed in Alice in the Cuckoo’s Nest?

In the show, we never actually openly communicate a specific diagnosis with the audience. We have our own ideas of what Alice might be struggling with, but we leave this is for the audience to ponder on.

After lots of research and interviews with mental health practitioners we learned that diagnosing mental illness is far more complex than we might imagine. It is not uncommon to experience many different illnesses at the same time, and diagnoses can change several times throughout even one episode - let alone a lifetime. The mind is constantly evolving, and mental health is an ever changing spectrum.

3. What messages about the experiences of mental health issues and being detained do you hope audiences will take away from Alice in the Cuckoo’s Nest?

One of the main purposes of choosing to approach this story in the way we did was to start a conversation about mental health with our audiences, which hopefully will have a bit of a ripple effect in the communities we’re reaching with the tour.

We’ve found it incredibly beneficial to offer Q&A sessions after the performance to receive valuable feedback about the show itself and audience reactions, but also for us to discuss our process and research techniques. Through holding Q&As we hope to continue the conversation about mental health awareness and openness that we start as soon as audiences enter the performance space.

4. You say on your blog that you spoke to mental health practitioners, assessment teams and people with experience of being detained under Section 2 of the Mental Health Act as part of your research for Alice in the Cuckoo’s Nest. Can you tell us a bit more about that?

These meetings were vital to establish characters based in truth. Although our Alice’s story was imagined, and originally based on fiction, we were very keen to ensure that her experiences weren’t too far from a realistic experience of an episode of psychosis.

The more we researched and spoke to different professionals and individuals with personal experience, we learned that what may feel far-fetched on paper or in the rehearsal room can be absolutely real when dealing with psychosis. For instance, we heard one example of a patient who spent long periods entirely convinced she was a caterpillar, wriggling on the floor. So it became less of a question of checking if the more surreal scenes were plausible, and more about finding ways to perform them in a way that communicated how real they were to Alice.

5. Were there any books or online resources that you found particularly helpful in informing how you wrote and directed Alice in the Cuckoo’s Nest?

We did lots of research as part of our rehearsal process. We watched several TED Talks and listened to podcasts such as The Guilty Feminist as well as directly interviewing nurses and mental health workers.

Two of the books we referred to were Living with a Black Dog by Ainsley and Matthew Johnstone and A Straight Talking Introduction to Being a Mental Health Service User by Peter Beresford.