Michael Jecks is the author of 43 novels. His work encompasses his highly acclaimed Templar series of historical thrillers, his humorous Bloody Mary Tudor series, the Vintener trilogy, and a modern spy story, Act of Vengeance - described by Lee Child as ‘an instant classic British spy novel’. His books are inspired by history and legends covering the moors where he lives, but his stories are grounded in real life and real people: what motivates them, and what makes them turn to violence. 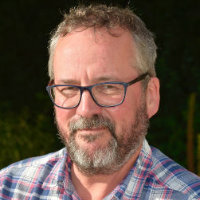 The founder of Medieval Murderers, he has served on the committees of the Crime Writers’ Association, Historical Writers’ Association, and The Detection Club. He has taught writing at Swanwick, Evesham, and tutored for the Royal Literary Fund at Exeter University. In 2014 he was honoured as the International Guest of Honour at the Bloody Words festival in Toronto, and as Grand Master of the first parade in the New Orleans Mardi Gras!