Hear about Julia’s Strong Winds series, set along the Suffolk Coast, then make some origami boats, fish and other marine creatures. 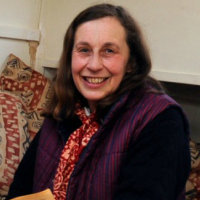 Julia Jones was born in Woodbridge, and her Strong Winds series, the latest title in which is Pebble, is set in familiar spots including Bawdsey and Lowestoft. When she was three years old, her father bought the wooden sailing ketch Peter Duck, a yacht originally commissioned and owned by children’s novelist Arthur Ransome and named for a character in one of his novels. This nautical connection with Ransome, along with numerous pony titles, influenced Julia to love books and become an author.

← Back to Waveney Kids’ Book Festival