This event is now sold out.

Queen of Crime Val McDermid will be talking about her latest Karen Pirie novel, Broken Ground, and her other bestselling series. 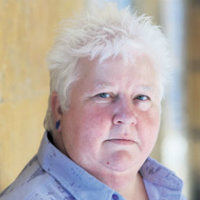 Val was born in Kirkcaldy and graduated in English at St Hilda’s College, Oxford, before becoming an award-winning journalist. She published her first novel, Report for Murder in 1987, and since then has sold over 16 million books in over 40 languages. She is perhaps best-known for her Wire in the Blood series, featuring clinical psychologist Dr Tony Hill and DCI Carol Jordan; she has also written series about private detective Kate Brannigan and journalist Lindsay Gordon respectively. Her many awards include the CWA Cartier Diamond Dagger.

Val is also an experienced broadcaster, who regularly features on TV and radio. She lives in Edinburgh and Cheshire.

← Back to Slaughter in Southwold