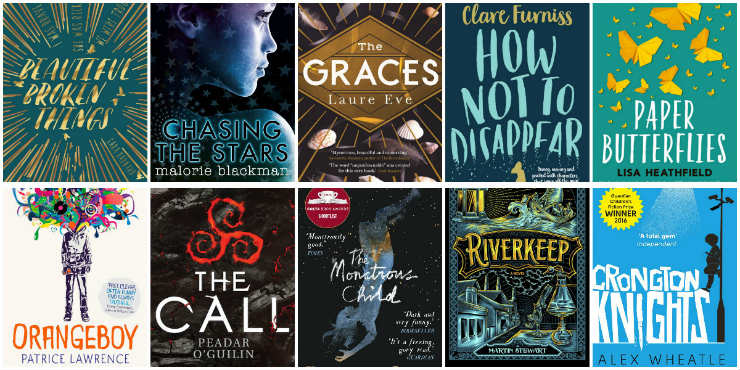 The shortlist for The YA Book Prize was announced on Thursday 2 March. Established by The Bookseller on 2-14, this award "celebrates great books for teenagers and young adults and aims to get more teens reading.

"Best friends Caddy and Rosie are inseparable. Their differences have brought them closer, but as she turns 16 Caddy begins to wish she could be a bit more like Rosie - confident, funny and interesting.

"Then Suzanne comes into their lives: beautiful, damaged, exciting and mysterious, and things get a whole lot more complicated. As Suzanne's past is revealed and her present begins to unravel, Caddy begins to see how much fun a little trouble can be. But the course of both friendship and recovery is rougher than either girl realises, and Caddy is about to learn that downward spirals have a momentum of their own."

Chasing the Stars by Malorie Blackman

"Olivia and her twin brother Aidan are heading alone back to Earth following the virus that wiped out the rest of their crew, and their family, in its entirety. Nathan is part of a community heading in the opposite direction. But on their journey, Nathan's ship is attacked and most of the community killed. Only a few survive.

"Their lives unexpectedly collided, Nathan and Olivia are instantly attracted to each other, deeply, head-over-heels - like nothing they have ever experienced. But not everyone is pleased. Surrounded by rumours, deception, even murder, is it possible to live out a happy ever after?"

The Graces, by Laure Eve

"Everyone said the Graces were witches.

"They moved through the corridors like sleek fish, ripples in their wake. Stares followed their backs and their hair.

"They had friends, but they were just distractions. They were waiting for someone different.

"All I had to do was show them that person was me.

"Like everyone else in her town, River is obsessed with the Graces, attracted by their glamour and apparent ability to weave magic. But are they really what they seem? And are they more dangerous than they let on?"

Check out Woodbridge library volunteer Emily's review of The Graces.

How Not To Disappear, by Clare Furniss

"Hattie's summer isn't going as planned. Her two best friends have abandoned her: Reuben has run off to Europe to 'find himself' and Kat is in Edinburgh with her new girlfriend. Meanwhile Hattie is stuck babysitting her twin siblings and dealing with endless drama around her mum's wedding. Oh, and she's also just discovered that she's pregnant with Reuben's baby.

"Then Gloria, Hattie's great-aunt who no one even knew existed, comes crashing into her life. Gloria's fiercely independent, rather too fond of a gin sling and is in the early stages of dementia. Together the two of them set out on a road trip of self-discovery - Gloria to finally confront the secrets of her past before they are erased from her memory forever and Hattie to face the hard choices that will determine her future."

This seems to be a real favourite with book prize judges this year.

"June's life at home with her stepmother and stepsister is a dark one - and a secret one. Not even her father knows about it. She's trapped like a butterfly in a net. But then she meets Blister, a boy in the woods. And in him, June recognises the tiniest glimmer of hope that perhaps she can find a way to fly far, far away from home and be free. Because every creature in this world deserves their freedom - but at what price?"

""Not cool enough, not clever enough, not street enough for anyone to notice me. I was the kid people looked straight through. Not any more. Not since Mr Orange."

"Sixteen-year-old Marlon has made his mum a promise - he'll never follow his big brother, Andre, down the wrong path. So far, it's been easy, but when a date ends in tragedy, Marlon finds himself hunted. They're after the mysterious Mr Orange, and they're going to use Marlon to get to him. Marlon's out of choices - can he become the person he never wanted to be, to protect everyone he loves?"

Another title that's up for a few awards this year.

The Call, by Peadar O'Guilin

""Your people drove them out of their homes. Thousands of years later they turn up again – and they’re gonna wipe you out."

"On her birthday, Nessa finds out the terrible truth about her home in Ireland – the truth that will change her future forever.

"That she and her friends must train for the most dangerous three minutes of their lives:

"That any day now, without warning, they will each wake in a terrifying land, alone and hunted, with a one in ten chance of returning alive.

"And it is Nessa, more than anyone, who is going to need every ounce of the guts, wit, and sheer spirit she was born with, if she – and the nation – are to survive."

The Monstrous Child, by Francesca Simon

"A stunning, operatic and epic drama like no other. Meet Hel, an ordinary teenager - and goddess of the Underworld. Why is life so unfair? But Hel tries to make the best of it, creating gleaming halls in her dark kingdom and welcoming the dead who she is forced to host for eternity. Until eternity itself is threatened."

"Fifteen-year-old Wulliam is dreading taking up his family's mantle of Riverkeep, tending the river and fishing corpses from its treacherous waters. But then everything changes. One night his father is possessed by a dark spirit, and Wull hears that a cure lurks deep within the great sea-beast known as the mormorach. He realizes he must go on an epic journey downriver to find it - or lose Pappa forever."

"Living on the South Crongton council estate has its worries - and life for McKay has been even tougher since his mum died. His dad has been working all hours to keep the bailiffs from their door. His brother is always out riding the streets at night, tempting trouble. And now, having strayed off his turf on a 'heroic' (if misguided) mission to help out a girl, McKay finds himself facing a friend's crazy ex-boyfriend, some power-tripping hood-rats and a notoriously violent gangster with a vendetta which hits too close to home. Poor McKay. He never asked for trouble. But during one madcap night of adventure and danger, he will find out who his true friends are and what it means to stick with your family."

Crongton Knights has already won the Guardian Children's Fiction Prize 2016 and is on Reading Well's 2017 list of moodboosting books for young people.