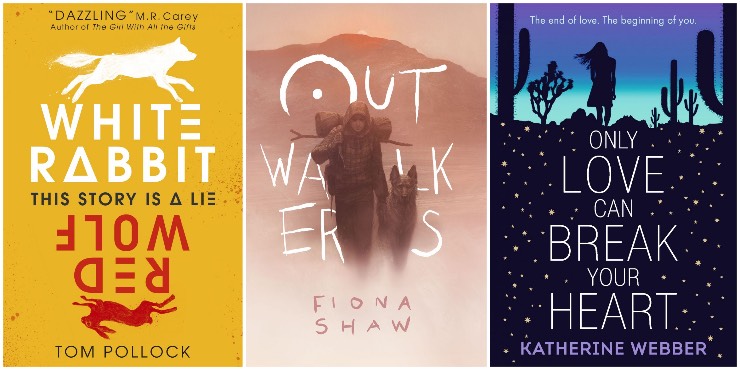 "Eden McKinley knows she can’t count on much in this world, but she can depend on Bonnie, her solid, steady, straight-A best friend. So it’s a bit of a surprise when Bonnie runs away with the boyfriend Eden knows nothing about five days before the start of their GCSEs. Especially when the police arrive on her doorstep and Eden finds out that the boyfriend is actually their music teacher, Mr Cohn.

"Sworn to secrecy and bound by loyalty, only Eden knows Bonnie’s location, and that’s the way it has to stay. There’s no way she’s betraying her best friend. Not even when she’s faced with police questioning, suspicious parents, and her own growing doubts. As the days pass and things begin to unravel, Eden is forced to question everything she thought she knew about the world, her best friend, and herself."

"Lexi hit rock bottom. After almost overdosing in a penthouse suite her brother stages an intervention and takes her to the Clarity facility for troubled young people. After a gruelling and painful detox, Lexi enters group therapy and meets her fellow ‘inmates’. Through her therapy sessions and a ten step programme, Lexi gradually opens up about her destructive life."

"Bluebelle, aka BB, aka Big Bones, is a sixteen-year-old girl encouraged to tackle her weight even though she’s perfectly happy, thank you, and getting on with her life and in love with food. Then a tragedy in the family forces BB to find a new relationship with her body and herself."

I Am Thunder, by Muhammad Khan

"15-year-old Muzna Saleem is passionate about writing and dreams of becoming a novelist. There’s just one problem - her super-controlling parents have already planned her life out for her: Step 1: Get educated. Step 2: Qualify as a doctor. Step 3: Marry a cousin from Pakistan. Oh, and boyfriends are totally haram.

"No one is more surprised than humble Muzna when high school hottie, Arif Malik, takes an interest in her. But Arif and his brother are angry at the West for demonising Islam and hiding a terrible secret. As Arif begins to lead Muzna down a dark path, she faces a terrible choice: keep quiet and betray her beliefs, or speak up and betray her heart?"

The Surface Breaks, by Louise O'Neill

"Deep beneath the sea off the cold Irish coast, Gaia is a young mermaid who dreams of being human - but at what terrible price? Hans Christian Andersen's dark original fairy tale is reimagined through a feminist lens."

I Was Born for This, by Alice Oseman

"For Angel Ahmadi, life is only about one thing: The Ark - a pop-rock trio of teenage boys who are currently taking the world by storm. Being part of The Ark's fandom has given her everything - her friendships, her dreams, her place in the world.

"Jimmy Kaga-Ricci owes everything to The Ark too. He's their frontman - and playing in a band is all he's ever dreamed of doing. It's just a shame that recently everything in his life seems to have turned into a bit of a nightmare. Because that's the problem with dreaming - eventually, inevitably, real life arrives with a wake-up call. And when Angel and Jimmy are unexpectedly thrust together, they will discover just how strange and surprising facing up to reality can be."

"17-year-old Pete Blankman is a maths prodigy. He also suffers from severe panic attacks. Afraid of everything, he finds solace in the orderly and logical world of mathematics and in the love of his family: his scientist mum and his tough twin sister Bel, as well as Ingrid, his only friend.

"However, when his mother is found stabbed before an award ceremony and his sister is nowhere to be found, Pete is dragged into a world of espionage and violence where state and family secrets intertwine."

"No one can get into Scotland, just like no one can cross the channel. England is under control of an authoritarian regime. They can track anyone, anywhere from a chip implanted in their skin.

"But Jake, who breaks out of the Academy dorm he's been housed in, has decided to escape. To go off-grid. To join a small group of independent spirits determined to keep out of the government's prying eyes. The Outwalkers. It's only with them he'll be able to reach Scotland - and safety."

Only Love Can Break Your Heart, by Katherine Webber

"Reiko loves the endless sky and electric colours of the Californian desert. It is a refuge from an increasingly claustrophobic life of family pressures and her own secrets. Then she meets Seth, a boy who shares a love of the desert and her yearning for a different kind of life.

"But Reiko and Seth both want something the other can't give them. As summer ends, things begin to fall apart. But the end of love can sometimes be the beginning of you."

"Growing up in her sleepy Cornish village dreaming of being a writer, 16-year-old Lou has always wondered about the grand Cardew house which has stood empty for years. And when the owners arrive for the summer - a handsome, dashing brother and sister - Lou is quite swept off her feet and into a world of moonlit cocktail parties and glamour beyond her wildest dreams.

"But, as she grows closer to the Cardews, is she abandoning her own ambitions - and is there something darker lurking at the heart of the Cardew family?"

See the rest of our Young Adult section for reviews of many of these titles as well as lots of further reading suggestions and reviews.