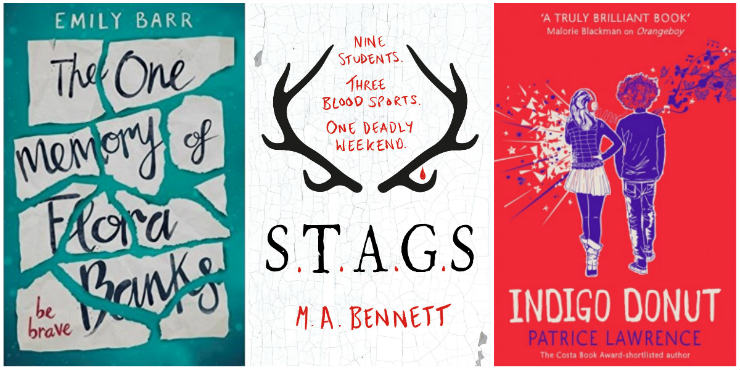 The shortlist for The YA Book Prize was announced on Friday 1 March. This award "celebrates great books for teenagers and young adults and aims to get more teens reading."

The One Memory of Flora Banks, by Emily Barr

“Flora has amnesia. She can’t remember anything day-to-day: the joke her friend made, the instructions her parents gave her, how old she is. Then she kisses someone she shouldn’t, and the next day she remembers it. It’s the first time she’s remembered anything since she was ten. But the boy is gone. She thinks he’s moved to the Arctic. Will following him be the key to unlocking her memory? Who can she trust?”

"It is the autumn term and Greer MacDonald is struggling to settle into the sixth form at the exclusive St Aidan the Great boarding school, known to its privileged pupils as S.T.A.G.S. Just when she despairs of making friends Greer receives a mysterious invitation with three words embossed upon on it: huntin' shootin' fishin'.

"When Greer learns that the invitation is to spend the half term weekend at the country manor of Henry de Warlencourt, the most popular and wealthy boy at S.T.A.G.S., she is as surprised as she is flattered. But when Greer joins the other chosen few at the ancient and sprawling Longcross Hall, she realises that Henry's parents are not at home; the only adults present are a cohort of eerily compliant servants."

It Only Happens in the Movies, by Holly Bourne

"Audrey is over romance. Since her parents’ relationship imploded her mother’s been catatonic, so she takes a cinema job to get out of the house. But there she meets wannabe film-maker Harry. Nobody expects Audrey and Harry to fall in love as hard and fast as they do. But that doesn't mean things are easy. Because real love isn't like the movies..."

Read Kate's review of It Only Happens in the Movies →

“Bailey is 17, mixed race, lives with his mum and dad in Hackney and spends all his time playing guitar or tending to his luscious ginger afro. Indigo is 17 and new to London, having grown up in the care system after being found by her mum’s dead body as a toddler. All Indigo wants is to know who she really is.

“When Bailey and Indigo meet at sixth form, sparks fly. But when Bailey becomes the target of a homeless man who seems to know more about Indigo than is normal, Bailey is forced to make a choice he should never have to make.”

“Today will change Adam Thorn’s life. Between his religious family, unpleasant boss and his ex-boyfriend, the bindings of his world are coming undone. And way across town, a ghost has risen from the lake. Is there time for Adam to find his release?”

"Evelyn is 17, and though she is rich and clever, she may never be allowed to follow her older brother to university. Enraged that she is expected to marry her childhood sweetheart rather than be educated, she joins the Suffragettes, and vows to pay the ultimate price for women's freedom.

"May is 15, and already sworn to the cause, though she and her fellow Suffragists refuse violence. When she meets Nell, a girl who's grown up in hardship, she sees a kindred spirit. Together and in love, the two girls start to dream of a world where all kinds of women have their place.

"But the fight for freedom will challenge Evelyn, May and Nell more than they ever could believe. As war looms, just how much are they willing to sacrifice?"

Read Amélie's review of Things a Bright Girl Can Do

"Eleven-year-old Malcolm Polstead and his dæmon, Asta, live with his parents at the Trout Inn near Oxford. Across the River Thames (which Malcolm navigates often using his beloved canoe, a boat by the name of La Belle Sauvage) is the Godstow Priory where the nuns live. Malcolm learns they have a guest with them; a baby by the name of Lyra Belacqua..."

“Round these ends, it’s hard to hold on to your dreams. Life’s a constant hustle for Mo. Her mum’s boyfriend Lloyd is just another man who likes to beat down women; the South Crong streets are fraught with hazards and nasty G’s; and when it comes to matters of the heart, she’s still hung up on Sam. No wonder she’s vexed so much of the time. Thank god she has her sisters, Elaine and Naomi, on her side: if one of them falls then they all fall.

“But when badness goes down and a life is left hanging in the balance, Mo has to face her hot urge for revenge and she might end up losing more than she wins.”