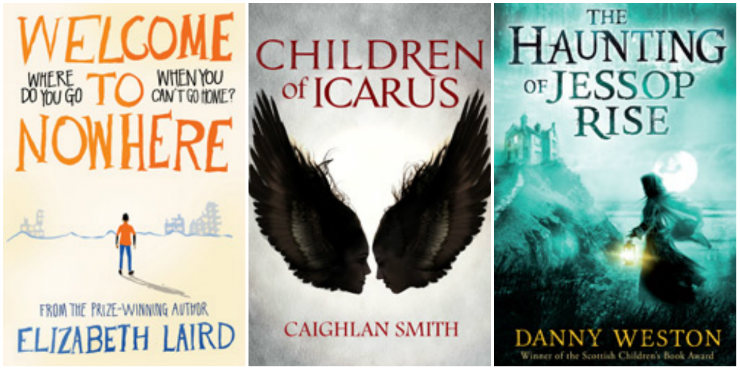 Not sure what to read next? Why not try something from the Scottish Teenage Book Prize shortlist. This award celebrates the best of Scottish Young Adult fiction, and the winner will be revealed on 1 March 2018.

"12-year-old Omar and his brothers and sisters were born and raised in the beautiful and bustling city of Bosra, Syria. Omar doesn't care about politics - all he wants is to grow up to become a successful businessman who will take the world by storm.

"But when his clever older brother, Musa, gets mixed up with some young political activists, everything changes. Before long, bombs are falling, people are dying, and Omar and his family have no choice but to flee their home with only what they can carry. Yet no matter how far they run, the shadow of war follows them - until they have no other choice than to attempt the dangerous journey to escape their homeland altogether. But where do you go when you can't go home?"

Children of Icarus, by Caighlan Smith

"It's Clara who's desperate to enter the labyrinth and it's Clara who's bright, strong and fearless enough to take on any challenge. It's no surprise when she's chosen. But so is the girl who has always lived in her shadow. Together they enter. Within minutes, they are torn apart forever.

"Now the girl who has never left the city walls must fight to survive in a living nightmare, where one false turn with who to trust means a certain dead end."

The Haunting of Jessop Rise, by Danny Weston

"Alone and penniless after his father is killed in a cotton mill accident, fourteen-year-old William faces the rest of his childhood in a brutal workhouse. Then his long-estranged uncle Seth sends for him, and William thinks his fortunes are changing.

"But arriving at Uncle Seth's grand house in North Wales, Jessop Rise, William encounters a ghostly figure. It soon becomes clear that the place is haunted by more than just one ghost. But who are the spectral creatures that prowl about the estate? What are they trying to tell William? And what is the dark secret that Uncle Seth has been keeping for so long?"

"With mainly black and white illustration and deceptively simple text, author and illustrator Debi Gliori examines how depression affects one's whole outlook upon life, and shows that there can be an escape - it may not be easy to find, but it is there."

This trilogy follows the adventures of teenage pilot Amity Vancour, who, in a world where war has been replaced by dogfights, discovers the organisation she works for is corrupt. She ends up in a secure prison camp, and goes on to lead a secret network of rebels.