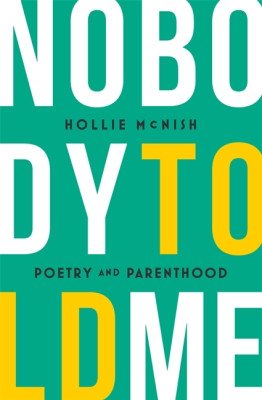 Nobody Told Me: Poetry and Parenthood, by Hollie McNish

There were many things that Hollie McNish didn't know before she was pregnant. How her family and friends would react; that Mr Whippy would be off the menu; how quickly ice can melt on a stomach.

These were on top of the many other things she didn't know about babies: how to stand while holding one; how to do a poetry gig with your baby as a member of the audience; how drum'n'bass can make a great lullaby.

And that's before you even start on toddlers. How to answer a question like 'is the world a jigsaw?'; dealing with a ten-hour train ride together; and how children can be caregivers too. But Hollie learned. And she's still learning, slowly.