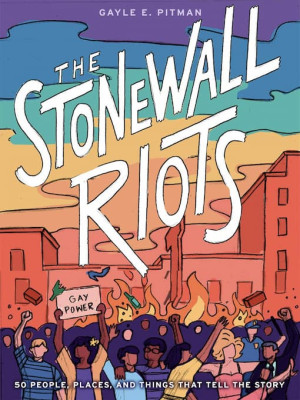 Celebrate LGBT History Month with these featured young adult titles. Enjoy our selected titles with a range of themes related to sexuality and identity.

Have pride: an inspirational history of the LGBTQ+ movement, by S. A. Caldwell

This inspirational history of the international LGBTQ+ movement will teach readers to accept and have pride in themselves and others, whatever their sexuality. It details the struggles and successes of LGBTQ+ movements around the world, looking at decriminalisation, the Stonewall riots and their legacy, global Pride movements, the HIV/AIDS crisis and equal marriage. It also includes profiles of significant LGBTQ+ figures from history and messages from young, modern-day members of the LGBTQ+ community, explaining why they have pride in themselves - and why you should, too.

Queer, there, and everywhere: 23 people who changed the world, by Sarah Prager

World history has been made by countless lesbian, gay, bisexual, transgender, and queer individuals - and you've never heard of many of them. Queer author and activist Sarah Prager delves deep into the lives of 23 people who fought, created, and loved on their own terms. From high-profile figures like Abraham Lincoln and Eleanor Roosevelt to the trailblazing gender-ambiguous Queen of Sweden and a bisexual blues singer who didn't make it into your history books, these astonishing true stories uncover a rich queer heritage that encompasses every culture, in every era.

Borrow Queer, there, and everywhere →

Rainbow revolutions: power, pride and protest in the fight for queer rights, by Jamie Lawson and Eve Lloyd Knight

On June 28 1969, around one o'clock in the morning, New York City Police raided the Stonewall Inn, a bar in Greenwich Village, New York. What happened that night would come to be a defining moment in the LGBTQ+ rights movement and for queer people everywhere. From the impassioned speeches of bold activists Karl Ulrichs and Audre Lorde to the birth of Pride and queer pop culture, 'Rainbow Revolutions' charts the dramatic rise of the LGBTQ+ rights movement, and celebrates the courageous individuals who stood up and demanded recognition.

Stonewall riots: coming out in the streets, by Gayle E. Pitman

This book is about the Stonewall Riots, a series of spontaneous, often violent demonstrations by members of the gay (LGBTQ+) community in reaction to a police raid that took place in the early morning hours of June 28, 1969, at the Stonewall Inn in the Greenwich Village neighborhood of Manhattan, New York City. The Riots are attributed as the spark that ignited the LGBTQ+ movement. The author describes American gay history leading up to the Riots, the Riots themselves, and the aftermath, and includes her interviews of people involved or witnesses, including a woman who was ten at the time.

Profusely illustrated, the book includes contemporary photos, newspaper clippings, and other period objects. A timely and necessary read, The Stonewall Riots helps readers to understand the history and legacy of the LGBTQ+ movement.

A positive and uplifting book for young people who are queer or curious - and their allies looking to support them. In this empowering and uplifting book, award-winning podcaster Alexis Caught sets out to help queer and curious teenagers explore their LGBTQ+ identity and understanding. Alongside the author's personal experiences are first-hand stories from notable LGBTQ+ figures, providing a inclusive account of what it means to grow up queer.

What's the T?, by Juno Dawson

Discover what it means to be a young transgender or non-binary person in the 21st century in this frank and funny guide for teens, from the author of 'This Book is Gay'.

Yay! You're gay! Now what?, by Riyadh Khalaf

In this personal, heartfelt go-to guide for young queer guys, YouTuber and presenter Riyadh Khalaf shares frank advice about everything from coming out to relationships, as well as interviews with inspirational queer role models, and encouragement for times when you're feeling low. There's a support section for family and friends written by Riyadh's parents and loads of hilarious, embarrassing, inspiring and moving stories from gay boys around the world.

This book is gay, by Juno Dawson and Spike Gerrell

Former PSHCE teacher and acclaimed YA author James Dawson gives an uncensored look at sexual orientation and gender identity. Including testimonials from people across the gender and sexual spectrums, this frank, funny, fully inclusive book explores everything anyone who ever dared to wonder wants to know - from sex to politics, how to pull, stereotypes, how to come-out and more.

Borrow This book is gay →

Coming out stories: personal experiences of coming out from across the LGBTQ+ spectrum, by Emma Goswell and Sam Walker

An empowering, witty and uplifting collection of coming out stories and advice from LGBTQ+ people from around the world, based on the hugely successful podcast 'Coming Out Stories.'

Can everyone please calm down?: Mae Martin's guide to 21st century sexuality, by Mae Martin

Mae Martin is a Canadian comedian with an encyclopedic knowledge of Harry Potter trivia. Aside from this, if there's one area that she's 100% anecdotally and personally qualified to tackle, it's sexuality: should there be any such thing as a 'sexuality spectrum', then Mae has probably existed at every point on it at some stage in her life. This book is Mae's attempt to demystify sexuality by narrating her own often humiliating adventures in sex, dating and gender identity.

Borrow Can everyone please calm down? →

Trans global: transgender then, now and around the world, by Honor Head

The whole concept of gender identity is being increasingly challenged and words such as non-binary, pansexual, transgender, cisgender and gender dysphoria are becoming commonplace. This book explores the cultures and people of the past who have embraced, challenged or quietly subverted society's expectations about gender. It features the current stories of openly transgender people around the world in positions of power and authority, who are helping to increase recognition and acceptance of the trans community.