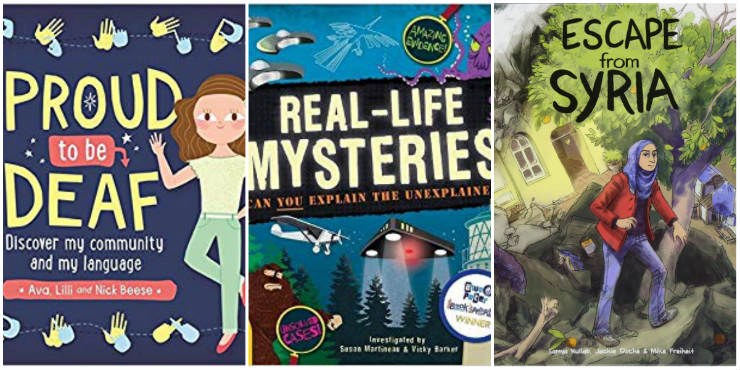 The winner of the School Library Association Information Book Award will be announced this week, as part of National Non-fiction November. We invite 7-16 year-olds to pick up an interesting book from one of the shortlists.

"Children have everything they need to be amazing scientists: a curious brain and super senses. Look I'm a Scientist is bursting with exciting, easy-peasy science fun to do at home."

Proud to be Deaf: discover my community and my language, by Ana, Lilli & Nick Beese

"Ava is like any other 7-year-old. She likes to talk and laugh with her friends, is obsessed with dogs and loves being active. Ava is also deaf - and she's proud of it. She loves her Deaf community, that she's bilingual, and that she experiences the world differently from hearing people.

"In this book, Ava welcomes her hearing peers to her daily life, the way technology helps her navigate the world and explains common misconceptions about deaf people - and introduces some of her deaf heroes who have achieved amazing things. She talks about her experiences at school making friends with hearing children, and teaches readers the BSL alphabet and BSL phrases."

"What's nestling between the rocks? Who's hiding inside an empty shell? What's that in a swirling cloud of black ink? Lift the flaps to discover these and many more intriguing rock pool secrets."

"An eye-catching information book filled with 100 interesting facts to learn about food: for example, learn about how cooking came about, the different methods used (grilling, boiling, fermentation etc) and what purposes it served in terms of nutrition. It will also be a great way to educate children about nutrition and the issues around overeating, junk food and obesity."

"Travel back in time 150 million years. Open the gate-folds to reveal lost prehistoric lands and the dinosaurs that once roamed them. Uncover the latest dinosaur discoveries and read fascinating stories about how these ancient creatures lives - and who dug them up."

Real-life Mysteries: can you explain the unexplained?, by Susan Martineau & Vicky Barker

"Have you ever wondered what exactly does go bump in the night? From mysteries like Shackleton's ghostly companion to the Loch Ness Monster and friends, read the amazing evidence about these mysterious cases and make up your own mind. Quench your curiosity with this myth-busting (and sometimes, myth-confirming!) fascinating kids' case study book. Things are not always what they seem - until they are, then you might wish you had never asked!"

The Ways of the Wolf, by Smriti Prasadam-Halls & Jonathan Woodward

"Majestic and fierce, proud and strong, the wolf has always been a source of fascination - and fear. It remains one of the most misunderstood of all creatures, frequently cast as our mortal enemy. The truth is that wolves and humans are more closely connected than we dare to admit.

"With beautifully lyrical language, Smriti Prasadam-Halls explores the lightning speed, echoing howl and family life of these mysterious animals, revealing astonishing facts and overturning misconceptions as she does so."

"Escape from Syria is a fictionalised account that calls on real-life circumstances and true tales of refugee families to serve as a microcosm of the Syrian uprising and the war and refugee crisis that followed.

"The story spans six years in the lives of Walid, his wife Dalia, and their two children, Amina and Youssef. Forced to flee from Syria, they become asylum-seekers in Lebanon, and finally resettled refugees in the West. It is a story that has been replayed thousands of times by other families.

"When the family home in Aleppo is destroyed by a government-led bomb strike, Walid has no choice but to take his wife and children and flee their war-torn and much loved homeland. They struggle to survive in the wretched refugee camps in Lebanon, and when Youssef becomes fatally ill as a result of the poor hygenic conditions, his father is forced to take great personal risk to save his family."

Explanatorium of Nature, by Shaila Brown

"From fruit to flowers, from shells to sharks, from ants to elephants, this encyclopedia will keep young readers interested. They will find out how things work, why they exist, and what they mean. The book inspires inquisitive young minds by depicting and explaining the wonders of plants, animals and the living world around us."

From Prejudice to Pride: a history of the LGBTQ+ movement, by Amy Lamé

"From Prejudice to Pride looks at the rise and achievements of the LGBTQ+ movement and the different communities, pioneers and stories of heartbreak and courage that have marched alongside it. Perfect for readers aged 11 and upwards, this book will inspire courage and pride in young LGBTQ+ people and help answer questions for all readers interested in gender and identity."