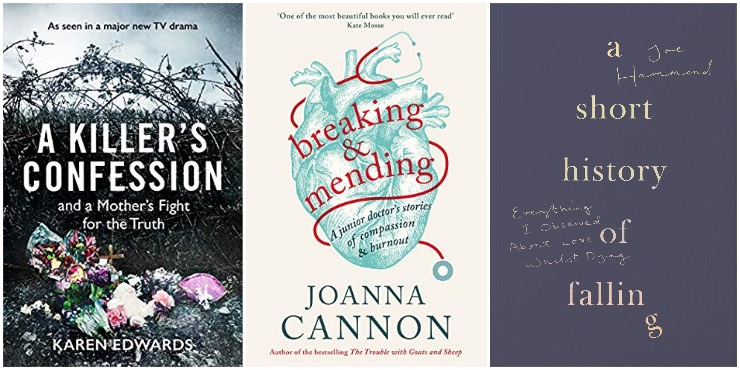 I Love the Bones of You: my father and the making of me, by Christopher Eccleston

"A son. A father he adores. A profession he loves, and, a disease that destroys. The painful and life-changing journey one of Britain's finest actors takes as his late father struggles with dementia."

Breaking and Mending: a junior doctor's stories of compassion & burnout, by Joanna Cannon

Joanna Cannon, bestselling fiction author and former Meet the Author interviewee ventures into non-fiction to tell the very personal story of her time as a medic.

"An intimate and urgent account of doctor burnout, Breaking and Mending is a frank assessment of mental health from both sides of the doctor/patient divide."

A Short History of Falling: everything I observed about love whilst dying, by Joe Hammond

"As I get weaker, less a part of this world, or less a part of what I love, less a part of my family's life, I can perceive its edges with fantastic clarity. I can lie against it, lolling my arm over the edge, running my fingers around the rim. And this is where I am.

"In 2018, Joe Hammond wrote a piece for the Guardian about the 33 birthday cards he was writing for his two sons. It was shared by thousands. In this book he tells the story behind that piece, about the experience of living with - and dying of - motor neurone disease (ALS)."

The Anarchy: the relentless rise of the East India Company, by William Dalrymple

The prize winning travel writer and historian turns his attention to the first great global corporation, the East India Company, drawing parallels with the present day.

Beth Chatto: a life with plants, by Catherine Horwood

"This volume tells the story of the most influential British plantswoman of the past 100 years. Beth Chatto was the inspiration behind the 'right plant, right place' ethos that lies at the heart of modern gardening. She also wrote some of the best-loved gardening books of the 20th century, among them The Dry Garden, The Damp Garden, and Drought-resistant planing: lessons from Beth Chatto's gravel garden.

"Some years before her death in May 2018, aged 94, Beth authorised Catherine Horwood to write her biography, with exclusive access to her archive. This title also includes extracts from Beth's notebooks and diaries, never previously published, bringing Beth's own distinctive and much-loved voice into the book. Most of the photographs, from Beth's personal archives, have also never been seen in print before."

Gotta Get Theroux This: my life and strange times in television, by Louis Theroux

"A funny, insightful memoir by much-loved documentary maker Louis Theroux, taking us on a weird and wonderful journey through two decades of groundbreaking television."

A Killer's Confession and a mother's fight for the truth, by Karen Edwards & Deborah Lucy

This is the true story behind the ITV series starring Martin Freeman and Imelda Staunton.

"A mother's story behind one of the most dramatic true crime cases in recent history.

"'I have lived every parent's worst nightmare. On what would have been my daughter's 29th birthday, Detective Superintendent Stephen Fulcher knocked on the door and told me my beautiful Becky was dead. She had been found buried in a shallow grave in a remote field in the Gloucestershire countryside. Becky had been brutally murdered.'

"This is Karen's story of an unbreakable love for her daughter despite unimaginable tragedy: from her despair through Becky's troubled teenage years, to the agonising eight years when Becky was missing, and then the dramatic story of how a killer's confession led to a terrible discovery.

"Karen was thrown into a world where the truth was never guaranteed; where taxi driver Christopher Halliwell nearly got away with murder; where the police officer who found her daughter was punished instead."

The Fear Bubble: hearness fear and live without limits, by Ant Middleton

"Ant Middleton is no stranger to fear: as a point man in the Special Forces, he confronted fear on a daily basis, never knowing what lay behind the next corner, or the next closed door. In prison, he was thrust into the unknown, cut off from friends and family, isolated with thoughts of failure and dread for his future. And at the top of Everest, in desperate, life-threatening conditions, he was forced to face up to his greatest fear, of leaving his children and wife without a father and husband.

"But fear is not his enemy. It is the energy that propels him. Thanks to the revolutionary concept of the 'Fear Bubble', Ant has learned to harness the power of fear and understands the positive force that it can become. Here Ant retells the story of his death-defying climb of Everest and reveals the concept of the 'Fear Bubble', showing how it can be used in our lives to help us break through our limits."

"Myth-debunking and taboo-busting, this is going to be the book that everyone is talking about. Period.

"At a time when women around the world are raising their voices in the fight for equality, there is still one taboo where there remains a deafening silence: periods. This book is an agenda-setting manifesto to remove the stigma and myths continuing to surround the female body. Bold, unapologetic, and a crusade to ignite conversation, this is a book for every woman - and man - everywhere."

"Operation Chastise, the destruction of the Mohne and Eder dams in north-west Germany by the RAF's 617 Squadron on the night of 16/17 May 1943, was an epic that has passed into Britain's national legend. Max Hastings grew up embracing the story, the classic 1955 movie and the memory of Guy Gibson, the 24-year-old wing-commander who led the raid. In the 21st Century, however, he urges that we should see the Dambusters in much more complex shades.

"The aircrew's heroism was entirely real, as was the brilliance of Barnes Wallis, inventor of the 'bouncing bombs'. But commanders who promised their young fliers that success could shorten the war fantasised as ruthlessly as they did about the entire bomber offensive."