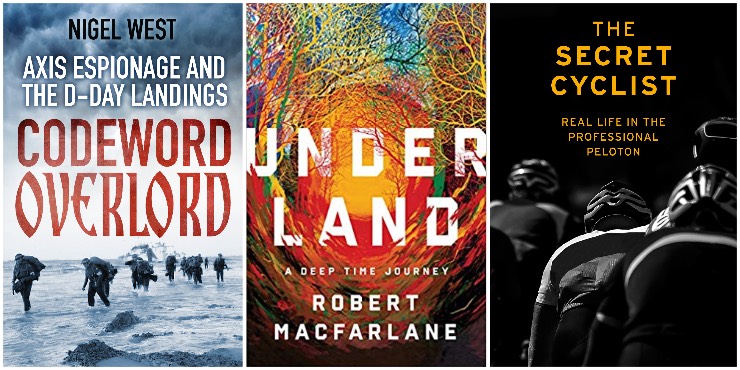 "In Underland, Robert Macfarlane takes us on a journey into the worlds beneath our feet. From the ice-blue depths of Greenland's glaciers, to the underground networks by which trees communicate, from Bronze Age burial chambers to the rock art of remote Arctic sea-caves, this is a deep-time voyage into the planet's past and future.

"Global in its geography, gripping in its voice and haunting in its implications, it is a work of huge range and power, and a remarkable new chapter in Macfarlane's long-term exploration of landscape and the human heart."

Interiors: the greatest rooms of the century, by Phaidon

This sumptuous coffee table volume is one that will appeal to design students, and let’s be honest, the plain nosy! This is a pictorial celebration of the finest design and it offers the reader a glimpse into the houses of the likes of Giorgio Armani, Peggy Guggenheim and Madonna.

"A stunning collection of the best living spaces created and commissioned by the most influential people in interior design, Interiors is the ultimate global celebration of residential interior design and decorating.

"With 400 rooms organised by designer from A-Z, the book goes beyond decorators, designers, and architects to highlight exquisite interiors designed by fashion designers, artists, style icons, and film stars who have made a unique contribution to the world of interior design.

"Covering work from the beginning of the 20th century to the present day, the book features everything from extraordinary chateaux, stunning town houses, and luxury penthouses - to desert ranches, beach houses, and tiny jewel-like apartments in more than 25 countries."

Who Owns England?, by Guy Shrubsole

"Who owns England? Behind this simple question lies this country's oldest and darkest secret. This is the history of how England's elite came to own our land - from aristocrats and the church to businessmen and corporations - and an inspiring manifesto for how we can take control back."

Lowborn: growing up, getting away and returning to Britain's poorest towns, by Kerry Hudson

"Kerry Hudson is proudly working class but she was never proudly poor. The poverty she grew up in was all-encompassing, grinding and often dehumanising. Always on the move with her single mother, Kerry attended nine primary schools and five secondaries, living in B&Bs and council flats. She scores eight out of ten on the Adverse Childhood Experiences measure of childhood trauma.

"Twenty years later, Kerry's life is unrecognisable. She's a prizewinning novelist who has travelled the world. She has a secure home, a loving partner and access to art, music, film and books. But she often finds herself looking over her shoulder, caught somehow between two worlds.

"Lowborn is Kerry's exploration of where she came from, revisiting the towns she grew up in to try to discover what being poor really means in Britain today and whether anything has changed."

"In 1970 Roger Deakin acquired Walnut Tree Farm, a semi-ruined Elizabethan farmhouse deep in the countryside of northern Suffolk, on the edge of Mellis Green, the largest area of common grazing land in England. Leaving swinging London behind, Deakin bought the farm in a spirit of 'back to the land' fervour; and, in the coming decades, lovingly restored it.

"Deakin lived here until his death in 2006, dredging the moat (in which he swam daily), planting woods and buying more of the surrounding fields, where he grew hay and wild flowers. Walnut Tree Farm became a place of pilgrimage and inspiration for nature-lovers, writers, intellectuals and artists, while Deakin's Waterlog has become a much-loved classic of nature writing and gave impetus to the wild swimming movement."

"The Allied invasion of Europe during summer 1944 was widely expected and it fell to the Axis intelligence services to provide High Command with advance warning of the precise date and place of the landings. Using cryptanalysis of Allied signals, undercover agents and ships, and photographic evidence, Axis intelligence was pitted directly against their Allied counterparts, who actively tried to create a decoy and aim their enemies at the wrong location.

"The success of Operation Overlord has played a large part in historians usually disparaging the German army as incompetent and corrupt. However, recently declassified documents suggest a different story. Here Nigel West provides the full, true story of Axis intelligence and how they affected the events of the D-Day landings."

"Award-winning anti-poverty campaigner Jack Monroe is back with Tin Can Cook, a delicious collection of seventy-five recipes, all made from store-cupboard ingredients available from corner shops and local supermarkets."

Following in the successful tradition of the Secret Footballer, Barrister etc., here is an anonymous professional cyclist telling us what life is really like in the peloton.

"Omertà is the strict code of silence that governed cycling during the Lance Armstrong era of doping. While it no longer rules the peloton, only anonymity can allow a rider to truly reveal what the world of modern professional cycling is really like.

"Every aspect of a rider's life is here: the pressure and the pitfalls in joining the pro ranks, the highs and lows of having teammates and being away for months at a time, the desperation of injuries, the glory of success, the spectre of drugs - everything about what it's actually like to ride a bike for a living.

"The Secret Cyclist takes us inside the team bus, along the road with the peloton and in the breakaways to hear the hidden, often weird and always entertaining stories of life as a racer."