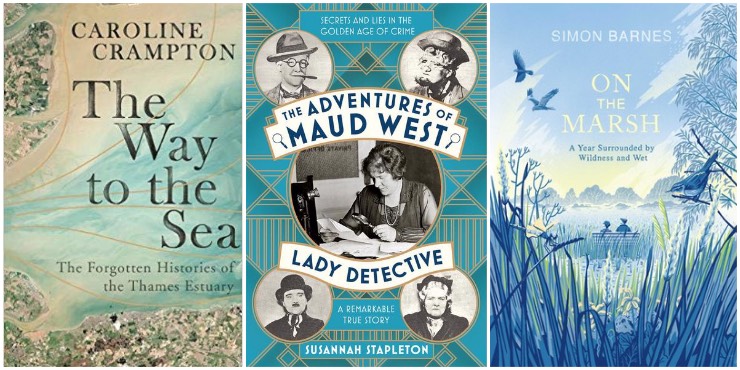 The Lost Boys, by Catherine Bailey

"Innsbruck, Austria, December 1944. The night is bitterly cold as a solitary black car moves silently through the snow-lined streets of the city. Behind the wheel is a Gestapo driver. In the back seat, two young boys huddle together. Brothers, aged four and two. Their destination: Wiesenhof, a Nazi orphanage. There they will be given new names, new identities, new lives. This ensures they will be almost impossible to trace.

"Berlin, Germany, One month earlier. Urlich von Hassell, former ambassador to Italy and a key member of the German Resistance, is executed for his involvement in an assassination plot against Hitler. As he goes to the gallows, he thinks of his daughter, ensconced in the ancestral castle of her Italian husband, and her two young sons. It is only a matter of time before the Nazis get to her. This is the extraordinary true account of a family ripped apart by persecution and war."

The Way to the Sea: the forgotten histories of the Thames Estuary, by Caroline Crampton

This guide takes the reader from the source of the Thames in Gloucestershire to the North Sea, telling many stories along the way.

"Caroline Crampton was born on the Thames Estuary to parents who had sailed there from South Africa in the early 1980s. Having grown up with seafaring legs and a desire to explore, Caroline is both a knowledgeable guide to the most hidden-away parts of this overlooked and unfashionable part of the country, and a persuasive advocate for its significance, both historically and culturally.

"As one of the key entrances and exits to England, the estuary has been pivotal to London's economic fortunes and in defining its place in the world. It has also been the entry point for immigrants for generations, yet it has an ambivalent relationship with newcomers, and UKIP's popularity in the area is on the rise."

The Adventures of Maud West, Lady Detective: secrets and lies in the golden age of crime, by Susannah Stapleton

"Maud West ran her detective agency in London for more than 30 years, having started sleuthing on behalf of society's finest in 1905. Her exploits grabbed headlines throughout the world but, beneath the public persona, she was forced to hide vital aspects of her own identity in order to thrive in a class-obsessed and male-dominated world. And - as Susannah Stapleton reveals - she was a most unreliable witness to her own life. Who was Maud? And what was the reality of being a female private detective in the Golden Age of Crime?

"Interweaving tales from Maud West's own 'casebook' with social history and extensive original research, Stapleton investigates the stories Maud West told about herself in a quest to uncover the truth."

The Prison Doctor: my time on the wards of Britain's most notorious jails, by Amanda Brown

"Horrifying, heartbreaking and eye-opening, these are the stories, the patients and the cases that have characterised a career spent behind bars. These are the no-holds-barred memoirs of a GP who went from working at a quiet suburban practice to treating the country's most dangerous criminals - first in young offenders' institutions, then at the notorious Wormwood Scrubs and finally at Europe's largest women-only prison in Europe, Bronzefield."

Vegan food is massively popular at the moment. In this book, YouTube star Ama takes inspiration from her Caribbean and West African roots.

"This volume offers brilliant plant-based dishes that make cooking and enjoying delicious vegan food every day genuinely easy - and fun. No bland or boring dishes, and forget all-day cooking. Rachel has created great full-flavour recipes that are easy to make and will inspire you to make vegan food part of your daily life.

"Rachel's recipes are quick and often one-pot; ingredients lists are short and supermarket-friendly; dishes can be prepped-ahead and, most importantly, she has included a song with each recipe so that you have a banging playlist to go alongside every plate of delicious food."

Adventures of the Yorkshire Shepherdess, by Amanda Owen

"Millions of viewers of Our Yorkshire Farm watched Amanda Owen, husband Clive and their nine children share their daily lives at Ravenseat, one of the most remote hill farms in the country. It's a beautiful place, high in the Dales, and a rewarding existence close to nature. But Ravenseat is a tenant farm and may not stay in the family, so when Amanda saw a nearby farmhouse up for sale, she knew it was her chance to create roots for the next generation.

"The old house needed a lot of renovation and money was tight, so with her usual resourcefulness Amanda set about the work herself, with some help from a travelling monk, a visiting plumber and Clive. It's fair to say things did not go according to plan."

On the Marsh: a year surrounded by wildness and wet, by Simon Barnes

A journalist and nature writer’s account of how he rewilded the marshland next to his garden to attract new species and to bring a better quality of life to his family, including his son Eddie, who has Down’s Syndrome.