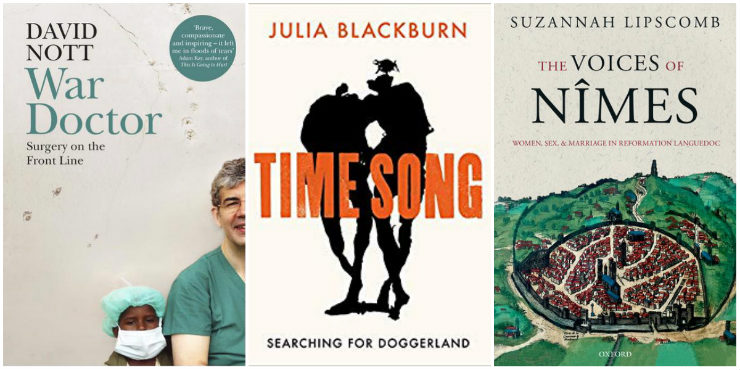 Latest title from the author of Threads : the delicate life of John Craske and former Meet the Author interviewee.

"Julia Blackburn has always collected things that hold stories about the past, especially the very distant past: mammoth bones, little shells that happen to be two million years old, a flint shaped as a weapon long ago.

"Time Song brings many such stories together as it tells of the creation, the existence and the loss of a country now called Doggerland, a huge and fertile area that once connected the entire east coast of England with mainland Europe, until it was finally submerged by rising sea levels around 5000 BC."

War Doctor: surgery on the front line, by David Nott

Gripping true story of a front-line trauma surgeon in the world's most dangerous war zones.

Threads of Life: a history of the world through the eye of a needle, by Clare Hunter

"For the mothers of the disappeared in 1970s Argentina, protest was difficult. Every Thursday they marched in front of government buildings wearing headscarves embroidered with the names of their lost children.

"In Tudor England Mary, Queen of Scots was under house arrest and her letters were censored, so she sewed secret treason into her needlework to communicate with the world outside.

"From the political propaganda of the Bayeux Tapestry and First World War soldiers with PTSD, to the maps sewn by schoolgirls in the New World, Threads of Life stretches from medieval France to contemporary Mexico, from a POW camp in Singapore to a family attic in Scotland."

Long Shot: my life as a sniper in the fight against ISIS, by Azad Cudi

"As Syria imploded in civil war in 2011, Kurdish volunteers in the north rose up to free their homeland from centuries of repression and create a progressive sanctuary of tolerance and democracy. To the medievalists of ISIS, this was an affront, so they amassed 10,000 men, heavy artillery, tanks, mortars and ranks of suicide bombers to crush the uprising. Against them stood 2,500 volunteer fighters armed with 40-year-old rifles. There was only one way for the Kurds to survive. They would have to kill the invaders one by one.

"A decade earlier, as a 19-year-old Iranian army conscript, Azad had been forced to fight his own people. Instead he deserted and sought asylum in Britain. Here Azad tells the inside story of how a group of activists and intellectuals built their own army and team of snipers, and then fought off a ferocious assault in nine months of bitter and bloody street battles."

"For 8 years, Clare Mackintosh wrote for Cotswold Life about the ups and downs of life with a young family in the countryside. In this memoir she brings together all of those stories - and more - for the first time. From keeping chickens to getting the WI drunk, longing for an Aga to dealing with nits, Clare opens the door to family life with warmth and humour and heart."

Bailey: my reason to live, by Andy Hutchins

We’re into A Street Cat Named Bob territory with this one. This is the story of how after 20 years on the street, Andy Hutchins turned his life around after fighting addiction and spells in prison with the help of a puppy.

Double Crossed: a code of honour, a complete betrayal, by Brian Wood

"At the age of 23, Brian Wood was thrust into the front line in Iraq, in the infamous Battle of Danny Boy. Ambushed, he led a charge across open ground with insurgents firing at just five soldiers. On his return, he was awarded the Military Cross.

"But Brian's story had only just begun. Struggling to re-integrate into family life, he suffered from PTSD. Then, five years later, a letter arrived: it summoned him to testify at the Al-Sweady Inquiry into allegations of war crimes by British soldiers during the 2003 Iraq invasion. After five years of public shame, Brian took the stand and his testimony led to full vindication. Phil Shiner, the lawyer who made the accusations, was struck off.

"In this memoir, Brian speaks movingly about the three battles in his life, from being ambushed with no cover, to the mental battle to adjust at home, to being falsely accused of hideous war crimes."

The Voices of Nîmes: women, sex, and marriage in Reformation Languedoc, by Suzannah Lipscomb

Fascinating and unusual book from historian Suzannah Lipscomb. Based on over 1,000 personal testimonies this book gives an insight into the lives of a group of ordinary French women in the 16th and 17th centuries. Subjects include concerns about their lives, sex, and friendships.