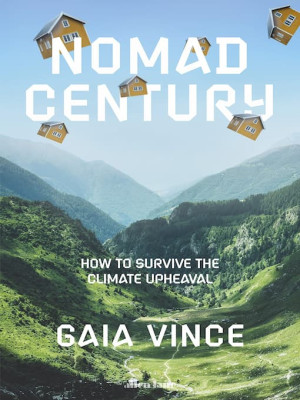 Take a look at our latest non-fiction titles for August 2022.

Nomad century: how to survive the climate upheaval, by Gaia Vince

An urgent investigation of the most underreported, seismic consequence of climate change - how it will force us to change where - and how - we liveWe are facing a species emergency. With every degree of temperature rise, a billion people will be displaced from the zone in which humans have lived for thousands of years. While we must do everything we can to mitigate the impact of climate change, the brutal truth is that huge swathes of the world are becoming uninhabitable.

From Bangladesh to Sudan to the western United States, and in cities from Cardiff to New Orleans to Shanghai, the quadruple threat of drought, heat, wildfires and flooding will utterly reshape Earth's human geography in the coming decades.

Without warning and only sometimes: scenes from an unpredictable childhood, by Kit De Waal

Kit de Waal grew up in a household of opposites and extremes. Her haphazard mother rarely cooked, forbade Christmas and birthdays, worked as a cleaner, nurse and childminder sometimes all at once and believed the world would end in 1975. Meanwhile, her father stuffed barrels full of goodies for his relatives in the Caribbean, cooked elaborate meals on a whim and splurged money they didn't have on cars, suits and shoes fit for a prince. Both of her parents were waiting for paradise. It never came.

Caught between three worlds, Irish, Caribbean and British in 1960s Birmingham, Kit and her brothers and sisters knew all the words to the best songs, caught sticklebacks in jam jars and braved hunger and hellfire until they could all escape.

Borrow Without warning and only sometimes →

Designed to ensure maximum flavour with the greatest of ease - including no-cook, quick-prep, quick-cook and one-pot dishes - 'Persiana Everyday' is full of generous, inviting and delicious recipes to cook again and again for family and friends.

The real prime suspect: my life as a female detective, by Jackie Malton

Jackie Malton was a no-nonsense girl from Leicestershire who joined the police force in the 1970s when women were kept apart from the men. Feisty and determined, Jackie worked in CID and the famous flying squad before rising to become one of only three female detective chief inspectors in the Metropolitan Police.

In 'The Real Prime Suspect', Malton describes the struggles she faced as a gay woman in the Metropolitan Police, where sexism and homophobia were rife. Jackie dealt with rapists, wife beaters, murderers, blackmailers and armed robbers but it was tackling the corruption in her own station that proved the most challenging.

From bestselling author Jane Dunn, this title is packed with simple bakes, mouth-watering flavours and iconic treats that will make every day special. Whether you're looking for a fancy funfetti sponge cake for a Birthday, a chunky Mini Egg Cookie for Easter, or a gooey S'more Muffin to add a little sparkle to your Sunday, this book has everything you need to treat yourself and celebrate every day.

Walking back home, by Ricky Ross

In 1986, Ricky Ross started a full-time career in music, which has lasted for over 35 years. His earlier working life was spent in youth work and teaching in his home city of Dundee, and his adopted home of Glasgow. It was in these two cities where he spent his formative years learning how to write and play songs.

Having always written about the people and places who've made an impact on his life, it's no surprise that this is how he has approached 'Walking Back Home', his first ever memoir, which takes the reader on a journey from Ricky's childhood to the rollercoaster of leading his band Deacon Blue to top of the charts and the band's eventual break-up and his solo career.

Nailing it, by Rich Hall

Growing up, Rich Hall aspired to be a writer, and after school he trained to be a journalist. But after a stint at the Knoxville News Sentinel in Tennessee, he found himself trying to impress a girl by doing a one-man show in a state university campus in Kansas, armed with a bucket, a loudhailer and some dog biscuits. It wasn't exactly a triumph, and he didn't get the girl, but he had found his true calling. 'Nailing It' is a collection of true stories from both Hall's professional and personal life where he really had to nail it.

'Epic Annette' is written in the form of an epic poem. It is also an epic literary event: a slender book of 45,000 words that describes the life of Annette de Beaumanoir, born in Brittany in 1923. She joined the French youth communist faction and the French resistance, and rescued two Jewish children inthe second world war. She subsequently trained as a neuropsychologist, fought against French colonialism in Algeria, was imprisoned by her own compatriots while pregnant with her third child, made a dramatic escape, and then worked with Ben Bella until his fall in 1965. She moved to Switzerland where she led a neuropsychology unit and thence to southern France.