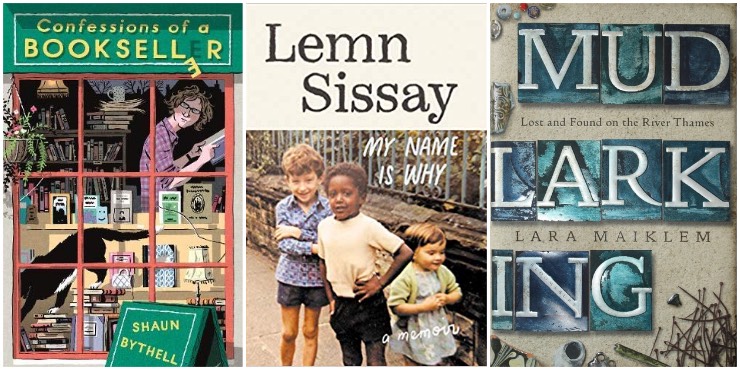 Confessions of a Bookseller, by Shaun Bythell

"'Do you have a list of your books, or do I just have to stare at them?'

"Shaun Bythell is the owner of The Bookshop in Wigtown, Scotland. With more than a mile of shelving, real log fires in the shop and the sea lapping nearby, the shop should by an idyll for bookworms. Unfortunately, Shaun also has to contend with bizarre requests from people who don't understand what the shop is, home invasions during the Wigtown Book Festival and Granny, his neurotic Italian assistant who likes digging for river mud to make poultices.

"The Diary of a Bookseller (soon to be a major TV series) introduced us to the joys and frustrations of life lived in books. Sardonic and sympathetic in equal measures, 'Confessions of a Bookseller' will reunite readers with the characters they've come to know and love."

Why You Should Read Children's Books, Even Though You Are So Old and Wise, by Katherine Rundell

"Katherine Rundell - Fellow of All Souls College, Oxford, and prize-winning author of five novels for children - explores how children's books ignite, and can re-ignite, the imagination; how children's fiction, with its unabashed emotion and playfulness, can awaken old hungers and create new perspectives on the world."

I Never Said I Loved You, by Rhik Samadder

"I'm in bed with my mother, in a Bangkok sex hotel. It is my 30th birthday, it is time for me to become a man, and I have grave worries about the kind of man I'm going to become."

This must rank as one of the more unlikely opening lines for a book. I Never Said I Loved You is a book about speaking openly, discovering family secrets and overcoming depression.

Mudlarking: lost and found on the River Thames, by Lara Maiklem

A fascinating history of London and its people told through the objects discarded by London residents throughout the ages found on the banks of the Thames.

"For thousands of years human beings have been losing their possessions and dumping their rubbish in the River Thames, making it the longest and most varied archaeological site in the world. For those in the know, the muddy stretches provide a tangible link with the past, a connection to the natural world, and an oasis of calm in a chaotic city.

"Lara Maiklem left the countryside for London in her twenties. At first enticed by the city, she soon found herself cut adrift, yearning for the solace she had known growing up among nature. Down on the banks of the River Thames, she discovered mudlarking: the act of scavenging in the mud for items discarded by past generations of Londoners.

"Moving from the river's tidal origins in the west of the city to the point where it reaches the sea in the east, Mudlarking is the story of the Thames and its people as seen through these objects."

My Name Is Why: a memoir, by Lemn Sissay

"At the age of 17, after a childhood in a fostered family followed by six years in care homes, Norman Greenwood was given his birth certificate. He learned that his real name was not Norman. It was Lemn Sissay. He was British and Ethiopian. And he learned that his mother had been pleading for his safe return to her since his birth.

"This is Lemn's story; a story of neglect and determination, misfortune and hope, cruelty and triumph. Sissay reflects on a childhood in care, self-expression and Britishness, and in doing so explores the institutional care system, race, family and the meaning of home.

"Written with all the lyricism and power you would expect from one of the nation's best-loved poets, this moving, frank and timely memoir is the result of a life spent asking questions, and a celebration of the redemptive power of creativity."

On the Road Not Taken: a memoir about the power of music, by Paul Dodgson

"On the Road Not Taken is a memoir about the transformational power of music. It begins with a boy growing up in a small town on the Kent coast in the 1970s, who learns to play the guitar and dreams of heading out on the open road with a head full of songs. But when the moment comes to make the choice he is not brave enough to try and do it for a living.

"Time passes but the desire to explain the world through music never goes away. And as the years go by it gets harder and harder to risk looking like a fool, of doing the very thing he would most like to do, of actually being himself.

"Eventually, 35 years later, when it feels like time is running out, he walks out onto a stage in front of 500 people and begins to sing again. What follows is an extraordinary period of self-discovery as he plays pubs, clubs, theatres and festivals, overcoming anxiety to experience the joy of performance."

This book started life as a Radio 4 drama.

Perfect Sound Whatever, by James Acaster

"January, 2017: James Acaster wakes hungover and alone in New York, his girlfriend having just left him. Thinking this is rock bottom, little does James know that by the end of the year he will have befouled himself in a Los Angeles steakhouse and disrespected a pensioner on television. Luckily, there is one thing he can rely on for comfort - music.

"In true Acaster fashion, this ends up with a completely unnecessary mission: to buy as much music as he can released in 2016, the year before everything went wrong (for James, at least). In Perfect Sound Whatever, he shows how the music of 2016 defeated the ugliness of 2017."