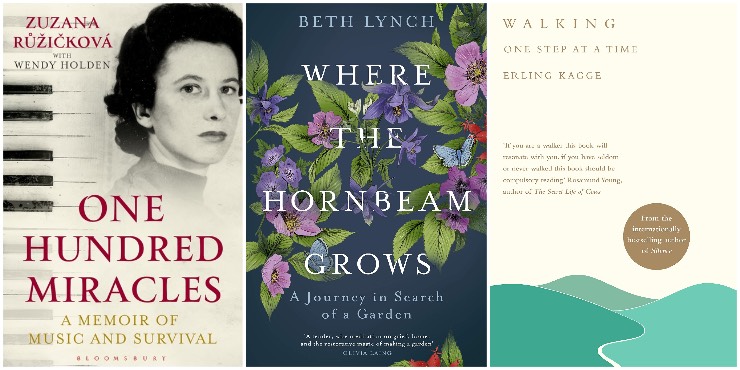 Where the Hornbeam Grows: a journey in search of a garden, by Beth Lynch

"What do you do when you find yourself living as a stranger?

"When Beth Lynch moved to Switzerland, she quickly realised that the sheer will to connect with people would not guarantee a happy relocation. Out of place and lonely, Beth knows that she needs to get her hands dirty if she is to put down roots. And so she sets about making herself at home in the way she knows best - by tending a garden, growing things.

"The search for a garden takes her across the country, through meadows and on mountain paths where familiar garden plants run wild, to the rugged hills of the Swiss Jura. In this remote and unfamiliar place of glow worms and dormice and singing toads she learns to garden in a new way, taking her cue from the natural world."

The Triumph of Henry Cecil: the authorised biography, by Tony Rushmer

"In 2006 many in the racing industry had written trainer Henry Cecil off. Personally, and professionally, Cecil was at his lowest ebb. But that was about to change. Henry Cecil staged the greatest comeback ever seen in horseracing, much of it despite suffering serious ill-health, which culminated in the success of Frankel, Timeform's highest rated horse of all-time.

"Now, for the first time, writer Tony Rushmer tells this incredible story. Tony had joined the Cecil stables in 2006 and so witnessed this story of personal and professional redemption from the inside. With the full support of the Cecil family, Tony speaks to all those involved and in doing so brings vividly to life the triumph of Henry Cecil."

One Hundred Miracles: a memoir of music and survival, by Zuzana Růžičková & Wendy Holden

"Zuzana Růžičková grew up in 1930s Czechoslovakia dreaming of two things: Johann Sebastian Bach and the piano. But her peaceful, melodic childhood was torn apart when, in 1939, the Nazis invaded.

"Uprooted from her home, transported from Auschwitz to Hamburg to Bergen-Belsen, bereaved, starved, and afflicted with crippling injuries to her musician's hands, the teenage Zuzana faced a series of devastating defeats. Yet with every truck and train ride, a small slip of paper printed with her favourite piece of Bach's music became her talisman.

"Armed with this 'proof that beauty still existed', Zuzana's fierce bravery and passion ensured her survival of the greatest human atrocities of all time, and would continue to sustain her through the brutalities of post-war Communist rule."

How to Treat People: a nurse's notes, by Molly Case

There has been several biographies of medical professionals recently. Molly Case is the Royal College of Nursing’s first ever Writer in Residence. If you enjoyed reading Christie Watson’s The Language of Kindness, this is a similar kind of read.

"The hand of a stranger offered in solace. A flower placed on a dead body as a mark of respect. A gentle word in response to fear and anger. It is these moments of empathy, in the extremis of human experience, which define us as people. Nobody knows this better than a nurse and Molly Case has witnessed countless such moments.

"In How to Treat People, she documents these extraordinary points, when two people truly connect. In rich, lyrical prose, she introduces us to patients with whom we share the pain, but also the experience of illness when life is at its most vivid. And when her father is admitted to the high dependency unit on which she works, Molly confronts care in a whole new way, when two worlds - the professional and the personal - suddenly collide."

What Dementia Teaches Us About Love, by Nicci Gerrard

"What is it to be oneself, and what is it to lose one's self. Who are we when we are not ourselves, and where do we go? This is a book about dementia - not a personal account, but an exploration, structured around this radically-slowed death. Full of people's stories, both sad and optimistic, it is a journey into the dusk and then the darkness - and then out on to the other side, where, once someone is dead, a life can be seen whole again."

Nicci Gerrard is one half of the bestselling writing partnership Nicci French.

Hinch Yourself Happy: all the best cleaning tips to shine your sink and soothe your soul, by Sophie Hinchcliffe

Books on cleaning and tidying are massively popular at the moment. Mrs Hinch is a star of Instagram with 1.5 million followers. She promises a cleaner house and a calmer you.

"Discover how to transform your home. Cleaning doesn't have to be that job you dread. Not when Mrs Hinch is here to show you her sparkly ways.

"Mrs Hinch has taken the nation by storm with her infectiously addictive charm, clever cleaning hacks and her passionate belief in the life-changing magic of tidying. With the help of her cloth family, Mrs Hinch will help you turn your house into a home."

Walking: one step at a time, by Erling Kagge

"From the bestselling author of Silence comes an illuminating examination of the joy of walking. From those perilous first steps as a toddler, to great expeditions, from walking to work to trekking to the North Pole, Erling Kagge explains that he who walks goes further and lives better. This is a book about the love of exploration, the delight of discovery and the equilibrium that can be found in this most simple of activities."

The author was the first person to reach the three poles: North, South and the summit of Everest, so if anyone is qualified to write on this subject, it is Kagge.