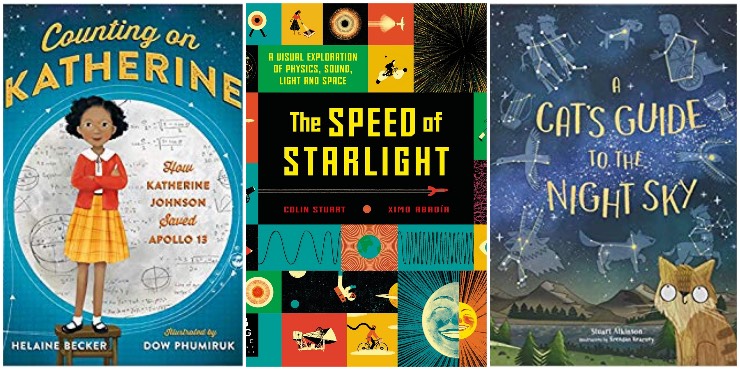 Has the 50th anniversary of the first Moon landings sparked your child's curiosity? Why not start the Summer Reading Challenge with some of our favourite factual books about space?

"In this book, you'll discover the history of man's relationship with the Moon - the science, the myths, the facts and the fiction."

Adventures in Space, by Simon Tyler

"Space is fascinating, and in this book Simon Tyler illustrates the planets, meteors, rockets and galaxies - even strange phenomena like the speed of light and solar flares!"

The Speed of Starlight, by Colin Stuart & Ximo Abadía

A Cat's Guide to the Night Sky, by Stuart Atkinson & Brendan Kearney

"If you look up at the sky on a dark night, what do you see? There’s a whole universe staring back at you.

"In the company of Felicity the cat discover the phases of the moon, the constellations and how to spot the Northern Lights and the Milky Way. This beautiful, fun book will introduce you to the beauty of the night sky and show you the stars like you’ve never seen them before."

The Big Beyond: the story of space travel, by James Carter & Aaron Cushley

"Get ready for blast-off with this fast-paced poem that’s all about space travel. From the early humans who dreamt of wings to the Moon landing, and from spacecraft exploring Mars to the future beyond... Climb on board for an adventure into outer space!"

Counting on Katheirne: how Katherine Johnson put astronauts on the Moon, by Helaine Becker & Dow Phumiruk

"Meet the amazing woman who put astronauts on the moon! Katherine Johnson is the mathematical genius who not only helped make the historic moon landings possible, but also made sure that all the astronauts returned safely home when the mission was in critical danger.

"As a child, Katherine loved to count. She counted the steps on the road, the number of dishes and spoons she washed in the kitchen sink, everything! Boundless, curious, and excited by calculations, young Katherine longed to know as much as she could about maths, about the universe."

The Race to Space: from the launch of Sputnik to the Moon landing, by Clive Gifford & Paul Daviz

"You know that man has walked on the moon, but do you know the story of how he got there? With the 50th anniversary of the moon landing on 20th July 2019, this book celebrates the Space Race rivalry between the US and the Soviet Union. Readers will learn about the neck-and-neck race between the two superpowers, through an illustrated story of the rivalry that gripped the world.

"From Russia's first satellite, Sputnik, to Neil Armstrong planting a US a flag on the moon, discover the events that unfolded through amazing nostalgic illustrations and engaging text."

Blast Off to the Moon!, by Ralph Timberlake & Euan Cook

"Based on Neil Armstrong's original space manual and exclusive material from NASA, this book is all about man's first journey to walk on the moon. Fully illustrated throughout with exclusive NASA photography, it contains material such as Neil Armstrong's space menus and instructions on how to put on a spacesuit."

The Extraordinary Life of Neil Armstrong

"One little boy who loved the idea of flying became the first person to set foot on the moon. On 20 July 1969 Neil Armstrong made history, his 'giant leap for mankind'.

"From his childhood playing with model planes to becoming one of the most famous astronauts of all time, discover the incredible story of Neil Armstrong's life in this illustrated book, complete with narrative biography, facts and timelines."

"How did Neil Armstrong become the first person to set foot on the moon? Find out how this flight-obsessed astronaut went on to take one of the most momentous steps in history."

Moonstruck! Poems about our moon, by Roger Stevens & Ed Boxall

"An anthology of poems about the moon, published to coincide with the 50th anniversary of the first moon landing in 1969."

"Welcome to Planetarium. This museum is open all hours. It houses an incredible collection of astronomical objects, from small, icy moons to huge swirling galaxies. So how big is the Universe? How did it begin and what mysteries does it hold?"