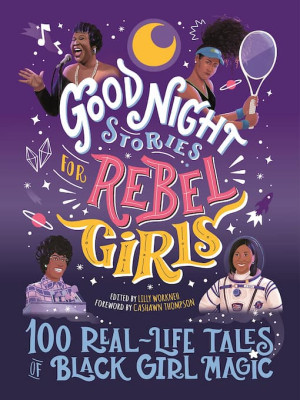 Celebrate Women's History Month this March with these inspiring stories for children.

Celebrating strong, brave women across the centuries and around the world, 'Queens' tells their stories of strength and resilience. Spanning 3000 years from Cleopatra to the Viking queens, Queen Nanny of Jamaica to HRH Elizabeth II, discover new stories about fierce female monarchs. Full to the brim with striking, vibrant illustrations and bursting with facts about the queens' pets, costume, homes, make-up, jewellery, and much more.

Uncover the stories of some of India's most iconic women. Packed full of facts, this is an unforgettable guide to some of the women that have shaped Indian history.

Borrow Girl power: Indian women who took on the world →

Good Girls Don't Make History is an important graphic novel that amplifies the voices of female legends from 1840 to the present day. Reliving moments from the lives of Elizabeth Cady Stanton, Sojourner Truth, Alice Paul, Ida B. Wells, and Susan B. Anthony, these inspiring stories are boldly told from one of the most formative eras in women's history - the fight for the vote in the United States.

The tale begins at a modern-day polling station in California with a mother and daughter voting together, then flashes back 180 years to the World Anti-Slavery Convention where the women's movement got its legendary start. The twists and turns take readers across the country and through time, illuminating parallels between epic battles for liberty in the past and similar struggles for justice today.

This book celebrates the lives and accomplishments of 100 barrier breaking Black women and girls who showcase the spirit of black girl magic.

In this book, discover the incredible life of Amanda Gorman, America's astounding young poet and activist. From an early age, little Amanda read everything she could get her hands on, from books to cereal boxes. Growing up with an auditory processing disorder and a speech impediment, Amanda had to work hard, but ultimately she took great strength from her experiences.

After hearing her teacher read aloud to the class, she knew that she wanted to become a poet, and nothing would stand in her way. At the age of 19, she became America's first-ever National Youth Poet Laureate. And, after performing her inspiring poem 'The Hill We Climb' at the Presidential Inauguration in January 2021, she became an icon across the world. This inspiring book features stylish and quirky illustrations and extra facts at the back.

Amelia Earhart was the first woman to fly solo across the Atlantic Ocean. She piloted many record-breaking flights, became an author, advised engineers, taught college students, and defended women's rights. And then, somewhere in the South Pacific, she disappeared on an attempted flight around the world. This is her story.

Fantastically great women artists and their stories, by Kate Pankhurst

Over half of all the visual artists working today are women, but the paintings and sculptures shown in many galleries and musuems tell a different story because they're usually the work of men. In this book Kate Pankhurst, descendent of Emmeline Pankhurst, tells the fascinating stories of some of history's most talented female artists and shows how their creations transformed the art world.

The girl who could fix anything: Beatrice Shilling, World War II engineer, by Mara Rockliff

This true story of a woman whose brilliance and mechanical expertise helped Britain win World War II is sure to inspire STEM readers and fans of amazing women in history. Beatrice Shilling wasn't quite like other children. She could make anything. She could fix anything. And when she took a thing apart, she put it back together better than before. When Beatrice left home to study engineering, she knew that as a girl she wouldn't be quite like the other engineers - and she wasn't. She was better.

Still, it took hard work and perseverance to persuade the Royal Aircraft Establishment to give her a chance. But when World War II broke out and British fighter pilots took to the skies in a desperate struggle for survival against Hitler's bombers, it was clearly time for new ideas. Could Beatrice solve an engine puzzle and help Britain win the war?

Borrow The girl who could fix anything →

Gloria realised from a young age that the women were treated differently than men, and that wasn't fair. Beginning her career as a journalist, her witty and honest articles challenged readers to see the world through her eyes. Following in the footsteps of her suffragist grandmother, she became passionate about feminism and grassroots activism. There was so much work to be done, and Gloria kept working - she became a passionate leader in the women's liberation movement and dedicated her life to brining about change.

A spokesperson for an entire generation, to this day Gloria inspires us to keep working for a fairer society - for everyone. This inspiring book features stylish and quirky illustrations and extra facts at the back, including a biographical timeline with historical photos and a detailed profile of this amazing feminist's life.

Women who led the way: great explorers and adventurers, by Mick Manning

From Aud the Deep-Minded, an early voyager to Iceland, and Sacagawea who guided the Lewis and Clark expedition across the USA, to Mae Jemison, the first black woman in space and Arunima Sinha, the first woman amputee to climb Mount Everest, this book shows the incredible courage, determination and power of women explorers over the last 1200 years. These women have led the way exploring lands, oceans, mountains, skies and space, but have also made pioneering discoveries in the fields of science, nature, archaeology, ecology and more. The lives of these women, told as personal stories, are an inspiration to us all.

Borrow Women who led the way: great explorers and adventurers →

This inspiring picture book tells the true story of world-famous deaf percussionist Dame Evelyn Glennie. This is a story of music, of obstacles, of strength and hard work, of all you can accomplish when you dream. As a child, Evelyn Glennie's ears began to hurt. Voices became distant whispers. Ringing phones sounded like muffled crunches in her ears. But when she was told that she would need to wear hearing aids for the rest of her life, Evelyn was determined that this would never stop her from playing music. Instead of giving up on her dreams, Evelyn found new ways to listen.

Born in Britain to Indian and Egyptian parents, Princess Sophia Duleep Singh was a prominent suffragette and campaigned for the women's right to vote.