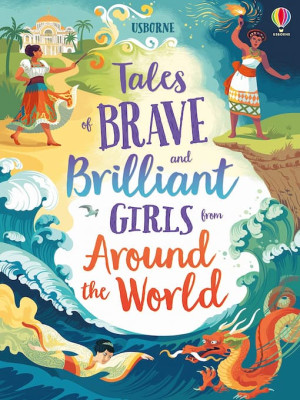 Celebrate International Women's Day with these inspiring stories for children.

What are little girls made of?, by Jeanne Willis and Isabelle Follath

In this witty reworking of popular nursery rhymes, Georgie Porgie doesn't dare to make the girls cry, Little Bo-Peep's sheep are all present and correct, thank you, and it's the queen, of course, who fixes Humpty Dumpty. With the combination of Jeanne Willis's brilliantly funny poems and charming, witty illustrations from Isabelle Follath, these nursery rhymes prove that girls can be the heroes of any story.

Borrow What are little girls made of? →

Here are eight captivating fairy tales featuring adventurous, intelligent and daring girls. Once known, now largely forgotten, these fantastic stories have been brought together to inspire and empower a new generation of readers.

Goddess, by Janina Ramirez, Sarah Walsh and the British Museum

Tales of powerful female figures have been told since the beginning of time and this collection brings together 50 stories from around the world. There are loving creators, wise leaders, fearsome warriors, gentle healers and mystical protectors, and they can each inspire you to find strength within yourself.

Beautifully written by cultural historian and broadcaster, Dr Janina Ramirez, and stunningly illustrated by Sarah Walsh, this amazing book contains goddesses, guides, spirits, saints, witches, demons and many more female figures that have played an important role in shaping belief today. Based on original sources and with photographs from the British Museum collection, this incredible introduction to goddesses throughout history will entertain, engage and empower readers everywhere.

Tales of brave and brilliant girls from around the world

Here are traditional tales from every corner of the globe, all featuring bold and clever heroines who battle dragons, fight sea serpents or save their village from monstrous thieves.

Borrow Tales of brave and brilliant girls from around the world →

Fierce, fearless and free: girls in myths and legends from around the world, by Lari Don and Eilidh Muldoon

Once upon a time, there was a handsome prince who - no, that's not right! Once upon a time, there were strong, fierce women who plotted, schemed, took action, showed kindness, used magic and trickery, and made their own destiny. From the long-haired Petrosinella who escaped the tower and broke the spell that the ogress had cast over her and Nana Miriam who beat a hippo using politeness and magic, to Kate Crackernuts who tried to save her stepsister from her mother's curse, these are stories of girls doing it for themselves!

With stories drawn from all over the world, including China, Scotland, Armenia, Italy, and Nigeria, Lari Don presents heroine stories that don't leave girls sitting around waiting to be saved by the handsome prince.

Eight princesses and a magic mirror, by Natasha Farrant and Lydia Corry

Here are eight princesses for the Rebel Girls generation: bold, empowered, full of curiosity, adventure and determined to be true to themselves. Natasha Farrant's original stories are set in different times all around the world.

The restless girls, by Jessie Burton and Angela Barrett

For her twelve daughters, Queen Laurelia's death in a motor car accident is a disaster beyond losing a mother. Their father, King Alberto, cannot bear the idea of the princesses ever being in danger and decides his daughters must be kept safe at all costs. Those costs include their lessons, their possessions and, most importantly, their freedom.

But the eldest, Princess Frida, will not bend to his will without a fight and she still has one possession her father can't take: the power of her imagination. And so, with little but wits and ingenuity to rely on, Frida and her sisters begin their fight to be allowed to live.